Ian Lavery (born 6 January 1963) is a British left-wing[1] Labour Party politician, who has been the Member of Parliament (MP) for Wansbeck since the 2010 general election. Lavery was the President of the National Union of Mineworkers.

Lavery has lived in Ashington all of his life. After leaving old East School school, Lavery started on a youth training scheme, before working in the construction industry. Following a recruitment campaign by the National Coal Board, he commenced work at Lynemouth Colliery in January 1980.[2] In July 1980 Lavery started a mining craft apprenticeship. In 1981 he transferred to Ellington Colliery and went to college, receiving an HNC in Mining. 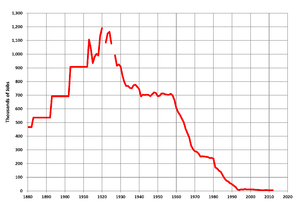 During the 1984–85 Miners' Strike Lavery was the only apprentice in the North East area who refused to go to work.[3] He was arrested seven times during the strike.

"I was the only one in the whole of the North East Area who had completed the HNC who wasn't given that opportunity. I went to see the manager, not that I would have gone by the way, and he said that they didn't think I would be interested. I asked him if he had thought to ask me, and he said no, not really, and he was smiling as he said it."[4]

Following the miners strike, Lavery became a more active member of the Labour Party and Trade Union movement. He rose through the ranks to become the first cabinet Chairman of the Wansbeck District Council. Following this appointment, Lavery would then be appointed General Secretary of the Northumberland area through the National Union of Mineworkers (NUM).[5] In 1992 Lavery stood for the National Executive Committee of the NUM. In the subsequent ballot, he was elected in the first round having gained more than 50 per cent of the vote. When Arthur Scargill stepped down as NUM President in August 2002, Lavery was elected through the normal balloting procedures, although he stood unopposed. He was perceived by many in the NUM as "the natural successor to Arthur Scargill"[6] though as the graph shows, the industry was a shadow of its former self.

In February 2010 Lavery became the prospective parliamentary candidate for the Labour Party for Wansbeck[7][8] and was duly elected Member of Parliament (MP) on 6 May 2010 with a reduced majority of 7,031.

On 8 May 2015, Lavery was re-elected as the Member of Parliament for Wansbeck with 19,276 votes. Despite his party suffering nationally, Lavery's majority increased to 10,881 (28.2%) from 7,031 in 2010. Chris Galley of the Conservatives party came second with 8,336 votes, Melanie Hurst of UKIP third with 7,014 votes with Chris Hedley of the green party finishing 4th with 2,407 votes.[9] Lavery spoke of how honoured he was to be re-elected as Wansbeck's Member of Parliament.

"It is an absolute honour to be re-elected by an increased majority and getting 50 per cent of the vote. It’s fantastic to represent Wansbeck. I’ll represent every single person regardless of their political persuasion. I’ll stand up for everybody and I will shout loud on behalf of my constituents because they are certainly the best. My thanks go to the voters for giving me this huge honour.” [9]

Lavery has been critical of New Labour figures, particularly those who have enjoyed lucrative work in the private sector, who prominently voice resistance to any attempt by the Labour Party to shift away from Blairite policies.[10] Lavery speaks in the commons on matters such as local regeneration, employment, energy, climate change, poverty, internationalism and sport.[8] Lavery also chairs the trade union group.[11]

One of Lavery's main acts within Parliament was to bring forward a Ten Minute Rule bill on the Government's introduction of the Bedroom Tax.[12]The Bill passed its first reading with a vote of 226 to 1, with Conservative Party whips reportedly instructing their MPs not to vote.[13] Despite Lavery's efforts, the bill failed to pass in its second reading, with a vote of 253 in favour, and 304 against.[14]

In 2011 during Prime Minister's Question Time Lavery asked Cameron whether he intended to sack health policy advisor Mark Britnell. Britnell, then head of health at KPMG and previously an advisor to Labour on private healthcare had predicted a ‘big opportunity’ for private companies with the NHS being eventually relegated to the role of an insurance provider. Cameron affected surprise claiming to have only recently heard of Britnell.[16]

He was appointed as PPS to Labour’s deputy leader Harriet Harman, but was forced to resign in 2012 after going against the party whip to increase the pension age.[17]

He was one of 16 signatories of an open letter to Ed Miliband in January 2015 calling on the party to commit to oppose further austerity, take rail franchises back into public ownership and strengthen collective bargaining arrangements.[18]

During Prime Minister's Questions on 19 March 2015 Lavery invited the Prime Minister to apologise to the North East after cutting thousands of public sector jobs and adding to the highest unemployment levels in the UK.[19] The Prime Minister replied that in the Wansbeck constituency unemployment benefit count had fallen 28% and the youth claimant count had fallen by 32% during the last Parliament.[20] In a blog to the trade unions, following the July budget, Lavery described the Coalition government as "sanctioning claimants for the most minor technicalities ..controlling the employment statistics."[21]

In September 2015 Lavery was made shadow minister for trade unions and civil society.

Lavery has urged people to donate to food banks especially during July August school holidays. Children from poor families are not receiving free school meals so it is harder for their families to ensure they get at least one good meal a day. Lavery stated “Even just a couple of tins or packets can make a real difference.”[22]

Lavery was arrested numerous times during the miner's strike and in 1985 was also convicted of a charge of football hooliganism. Lavery accused the police of fabricating the hooliganism charges due to his trade union activity, saying in 2005 "In court they told lie after lie, and I was fined . . . That is why I have absolutely no respect for the police.” [23]

In 2014 Lavery posed for a photograph with his son who had blackened his face to look like Michael Jackson. According to the Daily Mail, the photograph caused an outcry among some of Lavery's constituents who said they found it offensive.[24]

Lavery married his wife Hilary in 1986, they have two sons, Ian Jnr and Liam. Liam is a town councillor for the college ward of Ashington.[25]

Lavery is a Trustee of; CISWO in the North East Area, Northumberland Aged Mineworkers' Homes Association and Woodhorn Colliery Museum, he is a Patron of Headway for South East Northumberland as well as Wansbeck Disability Forum and is Chair of Ashington Community Football Club and the Hirst Welfare Centre. Lavery is also Chairman and trustee of the Pitman Painters.[5]