From Infogalactic: the planetary knowledge core
Jump to: navigation, search
This article is about the guitar manufacturer. For people named Ibáñez, see Ibáñez (disambiguation).

Ibanez (アイバニーズ, Aibanīzu?) is a Japanese guitar brand owned by Hoshino Gakki. Based in Nagoya, Aichi, Japan, Hoshino Gakki were one of the first Japanese musical instrument companies to gain a significant foothold in import guitar sales in the United States and Europe, as well as the first brand of guitars to mass-produce the seven-string guitar and eight-string guitar.

The modern era of Ibanez guitars began in 1957,[2] and the late 1950s and 1960s Ibanez catalogues show guitars with some wild looking designs,[3] manufactured by Kiso Suzuki Violin,[model 1] Guyatone,[model 2][model 3] and their own Tama factory established in 1962.[1][4] After Tama factory stopped guitar manufacturing in 1966, Hoshino Gakki used the Teisco[citation needed] and FujiGen Gakki guitar factories to manufacture Ibanez guitars, and after the Teisco guitar factory (Teisco String Instrument, Company) once closed down in 1969/1970, Hoshino Gakki used the FujiGen Gakki guitar factory to make most Ibanez guitars.

In the 1960s Japanese guitar makers started to mainly copy American guitar designs and Ibanez branded copies of Gibson, Fender and Rickenbacker models started to appear. This resulted in the so-called Ibanez lawsuit period. During this lawsuit period Ibanez started producing guitars under the Mann name to avoid authorities in the US and Canada. After the lawsuit period Hoshino Gakki introduced Ibanez models that were definitely not copies of the Gibson or Fender designs such as the Iceman and The Ibanez Roadstar. The company has produced its own guitar designs ever since. The late 1980s and early 1990s were an important period for the Ibanez brand. Hoshino Gakki's relationship with Frank Zappa's former guitarist Steve Vai resulted in the introduction of the Ibanez JEM and the Ibanez Universe models and after the earlier successes of the Roadstar and Iceman models in the late 1970s/early 1980s, Hoshino Gakki entered the superstrat market with the RG series which were a lower priced version of the Ibanez JEM model.

Pat Metheny with his signature model

Hoshino Gakki also had semi acoustic, nylon and steel stringed acoustic guitars manufactured under the Ibanez name. Most Ibanez guitars were made for Hoshino Gakki by the FujiGen guitar factory in Japan up until the mid-to-late 1980s and from then on Ibanez guitars have also been made in other Asian countries such as Korea, China and Indonesia. During the early 1980s the FujiGen guitar factory also produced most of the Roland guitar synthesizers, including the Stratocaster-style Roland G-505, the twin-humbucker Roland G-202 (endorsed by Eric Clapton, Dean Brown, Jeff Baxter, Yannis Spathas, Steve Howe, Mike Rutherford, Andy Summers and Steve Hackett) and the Ibanez X-ING IMG-2010.

Guitar brands such as Antoria and Mann shared some Ibanez guitar designs. The Antoria guitar brand was managed by JT Coppock Leeds Ltd England. CSL was a brand name managed by Charles Summerfield Ltd England. Maurice Summerfield of the Charles Summerfield Ltd company contributed some design ideas to Hoshino Gakki and also imported Ibanez and CSL guitars into the UK with Hoshino Gakki cooperation from 1964–1987.[2] The Maxxas brand name came about because Hoshino Gakki thought that the guitar did not fit in with the Ibanez model range and was therefore named Maxxas by Rich Lasner from Hoshino USA.[6]

Harry Rosenbloom, founder of the (now-closed) Medley Music of Bryn Mawr, Pennsylvania, was manufacturing handmade guitars under the name "Elger." By 1965 Rosenbloom had decided to stop manufacturing guitars and chose to become the exclusive North American distributor for Ibanez guitars. In September 1972, Hoshino began a partnership with Elger Guitars to import guitars from Japan. In September 1981, Elger was renamed "Hoshino U.S.A.", retaining the company headquarters in Bensalem, Pennsylvania as a distribution and quality-control center.

On June 28, 1977, in the Philadelphia Federal District Court, a lawsuit was filed by the Norlin Corporation, the parent company of Gibson Guitars against Elger/Hoshino U.S.A.'s use of the Gibson headstock design and logo. Hoshino settled out of court in early 1978 and the case was officially closed on February 2, 1978.[7]

After the lawsuit Hoshino Gakki abandoned the strategy of copying "classic" U.S.A. electric guitar designs—having already introduced a plethora of original designs. Hoshino was producing Artist models of their own design from 1974, introducing a set neck model in 1975. In 1977 they upgraded and extended their Artist range and introduced a number of other top quality original designs made to match or surpass famous American brands; the Performer and short-lived Concert ranges which competed with the Les Paul; through neck Musicians; Studios in fixed and through neck construction; the radically shaped Iceman and the Roadster which morphed into the Roadstar range, precursor to the popular superstrat era in the mid-1980s. The newer Ibanez models began incorporating more modern elements into their design such as radical body shapes, slimmer necks, 2-octave fingerboards, slim pointed headstocks, higher-output electronics, humbucker/single-coil/humbucker (H/S/H) pickup configurations, locking tremolo bridges and different finishes. 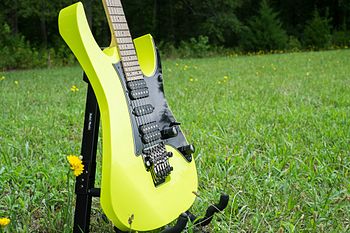 A 2012 Ibanez RG3250MZ
The main characteristics that are common among all Ibanez RG guitars (RG stands for Roadstar Guitar[model 4][verification needed]) are that they feature 24 frets and use thin necks, known as "Wizard", which allows for faster playing.[model 5] The RG features a line up of guitars with both floating tremolo systems and fixed bridge systems. The RG Premium guitars are similar to other RG models but are built in Ibanez's premium factory to premium quality standards. The RG Prestige guitars are Ibanez's top of the line RG models that are built in Japan. They feature higher quality materials, high craftsmanship, and higher quality bridges compared to other RG models.
Ibanez RGA
The Ibanez RGA was introduced at a time when the Ibanez RG series only had tremolo bridges. Since then, the RG series has introduced fixed bridge models, but Ibanez still produces the RGA series with an arched top to differentiate from the RG series. The arched top allows for added comfort while playing the guitar.[model 6]
Ibanez J. Custom
The J. Custom series are the most exclusive and high-end non-customshop guitars Ibanez offers. They are "Envisioned to be the finest Japanese-made guitar in history". Built by some of the most skilled luthiers Ibanez has to offer, they "represent every advance in design and technology Ibanez has developed over the last 20 years". They feature aftermarket pickups (Seymour Duncan Jazz & Custom 5 in the 6 string model and DiMarzio PAF-7 pickups in the 7 string model,) 5 piece maple/wenge necks with Titanium reinforcement rods, a rosewood fingerboard with a tree of life fret board inlay, and Edge Zero tremolo systems.
Ibanez RGD
The Ibanez RGD guitar was developed for heavy metal guitar players.[model 7] The RGD features a 26.5" scale which allows for lower than standard guitar tuning while retaining standard string tension without use of thicker gauge strings. It also features an extra deep scoop cut on the lower horn for easy high fret access. Ibanez currently makes two Ibanez RGD Prestige models.
Ibanez S 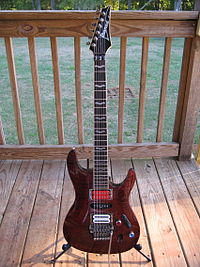 Custom modified 2005 S470
The Ibanez S (S Stands for Saber[model 8][verification needed]) guitar has an extremely thin body made out of mahogany. It has models with either 22 or 24 frets that are housed in slightly larger necks, known as the Wizard III, compared to the thinner Wizard necks that the RG has. All S models have arched top bodies. The guitars use the ZR (Zero Resistance) bridge system as well as fixed bridges.[model 8] Ibanez currently makes two S Prestige guitars.
Ibanez DN
The Ibanez DN guitar (DN stands for Darkstone[citation needed]) was developed for heavy metal guitar players. The main features of the DN are that it has a set-in neck for speed and playing comfort, medium frets, and coil tapped pickups. This guitar is currently discontinued.
Ibanez X
The Ibanez X guitars are Ibanez guitars that feature unconventional and unique body designs. An example would be the Ibanez Xiphos, which is stylized to look like the letter X.[model 9] For all X guitars currently available and for more information, check the Ibanez Electric Guitar page in 2013. (as of 2013, variations may be: Halberd XH300 and Glaive XG300, Mick Thomson Signature MTM100, MTM10)[clarification needed]
Ibanez Artist (AR)
The Ibanez Artist guitars were designed for heavy playing such as for heavy metal or traditional rock. The Artist ARZ is a single cutaway, 24 fret, 25" scale guitar that features a wide variety of bridges and pickups depending on the specific models.[model 10] The Artist ART is a single cutaway, 22 fret, 24.75" scale guitar that features a hard tail bridge.[model 11][verification needed] The Ibanez AR is a reissued series originating from the 70s. The AR series features a set-in neck, double cutaway, with 22 frets on a 24.75" scale.[model 12]
Ibanez FR
The Ibanez FR is a simple body type guitar that is designed to be played in many genres.[model 13]
Ibanez Gio
The Ibanez Gio are Ibanez' budget guitars, designed for high playability at low costs. Many high end Ibanez guitars are recreated in the more affordable Gio form, such as the RGA and ART models.
Ibanez Mikro
The Ibanez Mikro series are small form factor guitars designed for children, beginners, or guitar players looking for a guitar that is easy to transport.[model 14]

Ibanez Artcore series
The first Ibanez Artcore models were released in mid-2002 whose goal was to offer an affordable range of full-hollow and semi-hollow body guitars that appealed to entry level guitarists who were unable or unwilling to pay big money on high-priced guitars.
Ibanez Artcore Custom 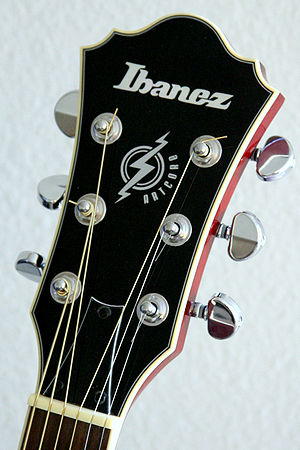 Headstock from an ARTCORE series guitar
The Artcore Custom is Ibanez's flagship model for the Artcore series. The bodies of the guitars are made of maple, the neck has a set-in construction type, and features wood control knobs and hand rolled frets.[model 15]
Ibanez AK
The Ibanez AK is a guitar designed for jazz and blues type playing. It features a slim set-in neck with a body designed to easily access the higher frets.[model 16] The AK is easily distinguishable by its sharper lower body horn (Florentine cutaway ?) that other Artcore guitars do not have.[clarification needed] 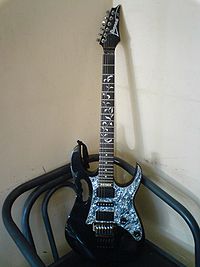 SR (Soundgear) Series
Middle-class model range in the new millennium, though it included expensive high-end and top-of-the-line Japanese models in the late 1980s and 1990s. Later top offerings were branded as Signature and SR Prestige models for clearer segmentation, and all non-Prestige model production moved outside Japan. Current models from the SR250 and up feature soapbar-style humbuckers with active EQ.

K5 Fieldy
A custom 5-string Soundgear design w/ "K5" Inlay centered on 12th fret. It was based around a late-1990s then-top-of-the-line Soundgear SR885 owned by the artist, retaining the shape and electronics, but with different colour options and a change of woods to suit his preferences. Early models were Japanese-built, but production later moved to other Asian countries, around the same time Japanese models were rebranded with the Prestige moniker and positioned as the absolute top of the line.

In the 1970s, the Nisshin Onpa company who owned the Maxon brand name, developed and began selling a series of effect pedals in Japan. Hoshino Gakki licensed these for sale using the name Ibanez outside of Japan. These two companies eventually began doing less and less business together until Nisshin Onpa ceased manufacturing the TS-9 reissue for Hoshino Gakki in 2002.

Ibanez endorsers: past and present