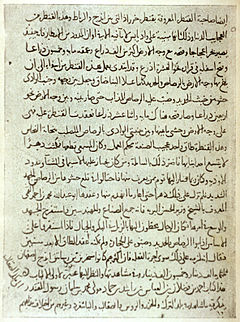 Ahmad ibn Fadlān ibn al-Abbās ibn Rāšid ibn Hammād (Arabic: أحمد بن فضلان بن العباس بن راشد بن حماد‎‎) was a 10th-century Arab traveler, famous for his account of his travels as a member of an embassy of the Abbasid Caliph of Baghdad to the ruler of Bulgars. His account is most known for providing a description of the rus people, including an eyewitness account of a ship burial. He provided descriptions for various other peoples, most notably Turkic peoples such as the Oghuzes, Pechenegs, Bashkirs, and Khazars.

For a long time, only an incomplete version of the account was known, as transmitted in the geographical dictionary of Yāqūt (under the headings Atil, Bashgird, Bulghār, Khazar, Khwārizm, Rūs), published in 1823 by Christian Martin Frähn.

Only in 1923 was a manuscript discovered by the Turkic scholar of Bashkir origin Zeki Validi Togan in the Astane Quds Museum, Mashhad, Iran.[1] The manuscript, Razawi Library MS 5229, dates from the 13th century (7th century Hijra) and consists of 420 pages (210 folia). Besides other geographical treatises, it contains a fuller version of Ibn Fadlan's text (pp. 390–420). Additional passages not preserved in MS 5229 are quoted in the work of the 16th century Persian geographer Amīn Rāzī called Haft Iqlīm ("Seven Climes").

Primary sources documents and historical texts reveal that Ahmad Ibn Fadlan was a “faqih”, an expert in Islamic jurisprudence and faith, in the court of the Abbasid Caliph Al-Muqtadir.[2] It appears certain from his writing that prior to his departure on his historic mission, he had already been serving for some time in the court of al-Muqtadir. Other than the fact that he was both a traveler and a theologian in service of the Abbasid Caliphate, little is known about Ahmad Ibn Fadlan prior to 921 and his self-reported travels. One subject in question is his racial and ethnic identity. Both traditional historians and conventional knowledge have assumed Ahmad Ibn Fadlan to be Arab. However, based on certain aspects of his writing style, scholars have surmised that he may not have been Arab.[3] Unfortunately, there is no certainty on this point, and the writing stylistics theory is still currently hypothetical.

In the accounts written by Ibn Fadlan, he is repeatedly referred to as an Arab. For example, one of the Oghuz Turks he met called him Arab:

[An Oghuz Turk] said to me one day through the interpreter “Tell this Arab, Does our Lord—Might and Majesty be His—have a wife?” I was horrified at this, and I glorified God and implored His forgiveness. He then glorified God and sought His forgiveness just as I had done. Such is the custom of the Turk, who, whenever he hears a Muslim glorifying God, or making the Muslim confession of faith, he does the same.[4]

One of the Rūsiyyah stood beside me and I heard him speaking to my interpreter. I quizzed him about what he had said, and he replied, “He said, ‘You Arabs are a foolish lot!’” So I said, “Why is that?” and he replied, “Because you purposely take those who are dearest to you and whom you hold in highest esteem and throw them under the earth, where they are eaten by the earth, by vermin and by worms, whereas we burn them in the fire there and then, so that they enter Paradise immediately.”[5]

Ibn Fadlan was sent from Baghdad in 921 to serve as the secretary to an ambassador from the Abbasid Caliph al-Muqtadir to the iltäbär (vassal-ruler under the Khazars) of the Bulgars, Almış.

On June 21, 921, a diplomatic party led by Susan al-Rassi, a eunuch in the caliph's court, left Baghdad.[6] Primarily, the purpose of their mission was to explain Islamic law to the recently converted Bulgar peoples living on the bank of the Volga River in what is now Russia. Additionally, the embassy was sent in response to a request by the ruler of the Bulgars to help them against their enemies, the Khazars.[7] Ibn Fadlan served as the group's religious advisor and lead counselor for Islamic religious doctrine and law.[8]

Ahmad Ibn Fadlan and the diplomatic party utilized established caravan routes toward Bukhara, now part of Uzbekistan, but instead of following that route all the way to the east, they turned northward in what is now northeastern Iran. Leaving the city of Gurgan near the Caspian Sea, they crossed lands belonging to a variety of Turkic peoples. One notable group he encountered were the Khazars, a uniquely religious khanate that was one of the few peoples to adopt Judaism amidst the surrounding Christian and Muslim spheres of influences. He also recorded his encounters with the Oghuz on the east coast of the Caspian, the Pechenegs on the Ural River, and the Bashkirs in what is now central Russia. All told, the delegation covered some 4000 kilometers (2500 mi).[6]

Ibn Fadlan’s envoy reached the Bulgars’ ruler capital on May 12, 922. When they arrived, Ibn Fadlan read aloud a letter from the Caliph to the Bulgar Khan, and presented him with gifts from the caliphate. The meeting with the Bulgar ruler, “a man of striking appearance and dignity, stout and broad, who sounded as though he were speaking from inside a large barrel”, left Ibn Fadlan “frightened and distressed”, since he was blamed for not bringing with him the promised money from the caliph to build a fortress as defense against enemies of the Bulgars.[9][10]

It has been thought during dozens of years, that Ibn Fadlan reached the Volga Bulgars in the Middle Volga region (currently, Tatarstan territories in Russia). But recently the thorough reconstruction of the embassy itinerary revealed: the Bulgars ruler "capital" was in the village Tri Protoka near the modern city of Astrakhan.[11] Therefore, all Ibn Fadlan account is about people living in the Northern Caspian area and Low Volga region.

During Ibn Fadlan’s era, the Islamic religion had not yet been codified or frozen into formal modes of law, "and the seal of finality had not been set upon further thought and development in theology or philosophy".[12] As a result, many of these newly converted peoples in the Central Eurasian lands did not fully integrate or implement Islam to the letter or code to which Ibn Fadlan specialized in as a “faqih”. For example, Ibn Fadlan details in his encounter that the Bulgar ruler commits an error in his prayer exhortations by repeating the prayer twice. One scholar calls it an “illuminating episode” in the text where Ibn Fadlan expresses his great anger and disgust over the fact that the ruler and the Bulgars in general are practicing some form of imperfect and doctrinally unsound Islam.[12] In general, Ibn Fadlan recognized and judged the peoples of central Eurasia he encountered by the possession and practice of Islam, along with their efforts put forth to utilize, implement, and foster Islamic faith and social practice in their respective society. Consequently, many of the peoples and societies to Ibn Fadlan were "like asses gone astray. They have no religious bonds with God, nor do they have recourse to reason".[9]

I have seen the Rus as they came on their merchant journeys and encamped by the Itil. I have never seen more perfect physical specimens, tall as date palms, blond and ruddy; they wear neither tunics nor kaftans, but the men wear a garment which covers one side of the body and leaves a hand free. Each man has an axe, a sword, and a knife, and keeps each by him at all times. Each woman wears on either breast a box of iron, silver, copper, or gold; the value of the box indicates the wealth of the husband. Each box has a ring from which depends a knife. The women wear neck-rings of gold and silver. Their most prized ornaments are green glass beads. They string them as necklaces for their women.

The Rūs appear as traders who set up shop on the river banks nearby the Bolğar camp. They are described as having bodies tall as (date) palm-trees, with blond hair and ruddy skin. They are tattooed from "fingernails to neck" with dark blue or dark green "tree patterns" and other "figures" and that all men are armed with an axe, sword and long knife.

Ibn Fadlan describes the Rus as "perfect physical specimens" and the hygiene of the Rūsiyyah as disgusting (while also noting with some astonishment that they comb their hair every day) and considers them vulgar and unsophisticated. In that, his account contrasts with that of the Persian traveler Ibn Rustah, whose impressions of the Rus were more favourable. He also describes in great detail the funeral of one of their chieftains (a ship burial involving human sacrifice). Some scholars believe that it took place in the modern Balymer complex.[13]

Ibn Fadlan’s journey and especially his accompanying recorded accounts of it, which were rooted in a mission of conversion and advisement, and highlighted by an adventure of exploration, has “left a unique geo-historical and ethnographic record of the northern fringes of 10th-century Eurasia”.[14] It serves both as a historical and ethnographic document that has been declared unparalleled in description and depth to which it explores the customs, societies, places, and peoples of Central Eurasia beyond the outposts of the Muslim world. Centuries before Rubruck, Polo, Ibn-Battuta, and Clavijo, his account surpasses theirs in his descriptions of the peoples and places of Central Eurasia, particularly his accounts of the Bulgars, the Khazars, and the Rus.[14] As a result, his accounts have been indispensable in the investigation and analysis of the history of the Vikings and the Rus, helping historians, archaeologists and linguists clarify a traditionally unclear and gapped history. In fact, one historian who specializes in the history of Central Asia and Russia thanked such contributors and historians like Ibn Fadlan, who "on (his) way (through Central Eurasia), let us hear and see and sense what once happened—and was past, otherwise irretrievably lost."[15]

There is some controversy with regards to the impact of Ahmad Ibn Fadlan’s journey to Central Eurasia and his recorded accounts. Some scholars contend that Ibn Fadlan’s journey and effort to establish and solidify Islamic law and religion in that region of Central Eurasia was a precursor to the theories about the “clash of civilizations”.[12] During this historical period, two new religious faiths emerged in the same region of Central Eurasia (present-day Russia)—Orthodox Christianity and Islam, which conflicted with one another, and scholars suggest that because Ibn Fadlan was a main proponent of both the installation and development of Islam in that region, he is partially responsible for the subsequent religious conflict and tension. However, opposing scholars characterize this theory as contentious, saying that it reduces complex histories into simplistic and antagonistic categories. Furthermore they state that Ibn Fadlan worked to counter any conflict or clash between two societies of peoples by foregrounding the ongoing and necessary negotiation and exchange of culture, ethnicity, language, and religion.[12] In effect, Ibn Fadlan was making cross-cultural connections, integrating those who were considered different or “barbarian” into the wider global world, ushering in a stronger political, economic, and social interconnectedness that broke down traditional borders and lines of distinction that would have otherwise fostered conflict and nationalism.[citation needed]

Elements of Ibn Fadlan's account are used in the novel Eaters of the Dead by Michael Crichton (adapted to film in The 13th Warrior with Antonio Banderas as Ibn Fadlan), in which the Arab ambassador is taken even further north and is involved in adventures inspired by the Old English epic Beowulf.

A Syrian TV series, The Roof of the World or Saqf al-Alam, (Arabic: سقف العالم‎‎), was produced in 2007 charting Ibn Fadlan's journey from a contemporary perspective. The 30 one-hour episodes tackle the relations between Islam and Europe at two moments: the time of Ibn Fadlan and the present. The motivation for the series was the 2005 Jyllands-Posten Muhammad cartoons controversy in Denmark.