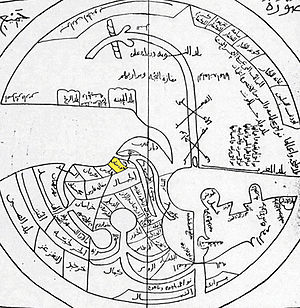 10th century map of the World by Ibn Hawqal. 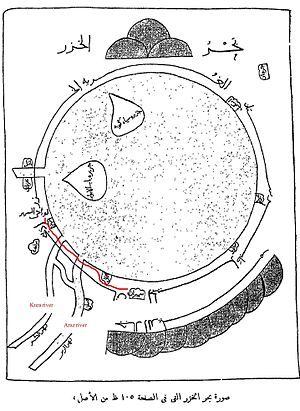 10th century map of the Caspian sea by Ibn Hawqal 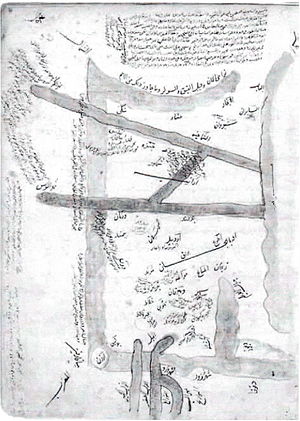 10th century map of the Caspian sea by Ibn Hawqal

Muḥammad Abū’l-Qāsim Ibn Ḥawqal (Arabic: محمد أبو القاسم بن حوقل‎‎, born in Nisibis, Upper Mesopotamia;[1] travelled 943-969 CE) was a 10th-century Muslim Arab writer, geographer, and chronicler.[2] His famous work, written in 977, is called Ṣūrat al-’Arḍ (صورة الارض; "The face of the Earth"). The date of his death is not precisely known. On the basis of his writings, he died after 368 H / 978 C.E.

What little is known of his life is extrapolated from his book, which was a revision and extension of the Masālik ul-Mamālik of Istakhri (951). That itself was a revised edition of the Ṣuwar al-aqālīm of Ahmed ibn Sahl al-Balkhi, who wrote about 921.

Ibn Hawqal was clearly more than an editor; he was a traveler who spent much of his time writing about the areas and things he had seen. He spent the last 30 years of his life traveling to remote parts of Asia and Africa. One of his travels brought him 20° south of the equator along the East African coast. One of the things he noticed was that there were large numbers of people living in areas that the Greeks, working from logic rather than experience, said must be uninhabitable.

His descriptions were, at the time, considered to be accurate and very helpful to travellers. Ṣūrat al-’Arḍ included a detailed description of Muslim-held Spain and particularly Sicily. Ibn Hawqal recorded that the area of Fraxinet (La Garde-Freinet) was richly cultivated by its Muslim inhabitants, and they have been credited with a number of agricultural and fishing innovations for the region. The difficulty with using Ibn Hawqal as a primary source is that he writes in the 'roots and realms' genre, and there are instances of 10th century humour in his account of Sicily during the Kalbid-Fatimid dynasty. In doing this he frequently exaggerates; he depicts the Christian population of Palermo as being uncivilised and barbaric.

He also mentions the "Lands of the Romans," the term used by the Muslim world -and the Byzantines themselves- to describe the Byzantine Empire. In it, among other things, he describes his first-hand observation that 360 languages are spoken in the Caucasus, with Azeri and Persian languages being used as Lingua Franca across the Caucasus, he also gives a description of Kiev, and is said to have mentioned the route of the Volga Bulgars and the Khazars, perhaps by Sviatoslav I of Kiev.[3] He also mentions and published a cartographic map of Sindh, he mentions the geography and culture of Sindh and the Indus River.