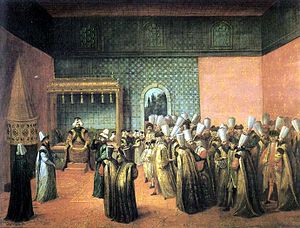 Ibrahim Muteferrika was born in Kolozsvár (present-day Cluj-Napoca, Romania). He was an ethnic Hungarian Unitarian who converted to Islam.[2][4] His original Hungarian language name is however unknown.[2]

"Why do the Christian nations, which were so weak in the past compared with Muslim nations begin to dominate so many lands in modern times and even defeat the once victorious Ottoman armies?"..."Because they have laws and rules invented by reason"

Ibrahim Muteferrika, Rational basis for the Politics of Nations (1731)[5]

It was during his years as a diplomat that he took a keen interest in collecting books that helped him understand the ongoing Renaissance, the emergence of Protestant movements in Europe, and the rise of powerful colonial empires in Europe. - 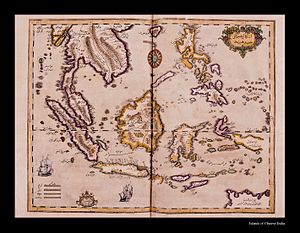 This map of the Indian Ocean and the China Sea was engraved in 1728 by the Hungarian-born Ottoman polymath and publisher Ibrahim Muteferrika; it is one of a series that illustrated Katip Çelebi’s Cihannuma (Universal Geography), the first printed book of maps and drawings to appear in the Muslim World.

His volumes, printed in Istanbul and using custom-made fonts, are occasionally referred to as "Turkish incunabula".[2][7] Muteferrika, whose last name derived from his employment as a Müteferrika, head of the household, under Sultan Ahmed III and during the Tulip Era, was also a geographer, astronomer, and philosopher.[2]

Following a 1726 report on the efficiency of the new system, which he drafted and presented simultaneously to Grand Vizier Nevşehirli Damat İbrahim Pasha, the Grand Mufti, and the clergy, and a later request submitted to Sultan Ahmed III, he received permission to publish non-religious books (despite opposition from some calligraphers and religious leaders).[2] Muteferrika's press published its first book in 1729, and, by 1743, issued 17 works in 23 volumes (each having between 500 and 1,000 copies).[2][7] The first book ever published by Muteferrika is "Vankulu Lügati", a 2-volume Arabic-Turkish dictionary.

Among the works published by Müteferrika were historical and generically scientific works, as well as Katip Çelebi's world atlas Cihannüma (loosely translated as: The Mirror of the World or the World Seer).[2] In a digression that he added to his printing, Müteferrika discussed the Heliocentrism of astronomy in detail, with references to relatively up-to-date scientific arguments for and against it. In this regard, he is considered one of the first people to properly introduce heliocentrism to the Ottoman readers.[8]

After 1742, however, Ibrahim Muteferrika's printing activities were discontinued and an attempt by the British diplomat James Mario Matra, motivated by the exorbitant prices for manuscript books, to reestablish a press in Istanbul was aborted in 1779.[9] In his account, Matra refers to the strong opposition of the scribes which Müteferrika's enterprise had to face earlier:

A Press had been set up here about sixty years ago in the turbulent reign of Ahmed III but those who maintained themselves by copying of Books, apprehending with reason that their trade would be totally ruined, were so loud in their clamours as to alarm the Seraglio, and as they were supported by a seditious Corps of Janissary, the Sultan apprehending what really did after happen, that as he mounted the throne by one insurrection, he might be tumbled from it by another, gave way to their complaints, and suppressed the Press, before anything better than the Quran, Sunnah, and some trifling books of Mathematics had been struck off.[9]

A statue of Muteferrika can be found in the Sahaflar Çarşısı adjacent to the Grand Bazaar in Istanbul.[10]

A total of 17 titles have been published by Muteferrika at his own press during his lifetime :

(Most of the copies of the book Tarih-i Çelebizade have been bound into the third and last volume of Tarih-i Raşid and sold together with it and thus have erroneously led several sources to believe a total of 16 items have been published.)