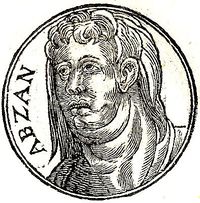 Ibzan (Hebrew: אִבְצָן‎ ’Iḇṣān; Ancient Greek: Ἀβαισσάν; Latin: Abesan) appears in the Bible as one of the Judges of Israel. Very little is said about him, except the following:

8And after him Ibzan of Bethlehem judged Israel.
9 And he had thirty sons, and thirty daughters, whom he sent abroad, and took in thirty daughters from abroad for his sons. And he judged Israel seven years.
10 Then died Ibzan, and was buried at Bethlehem.
—From Judges 12:8-10 (King James Version)