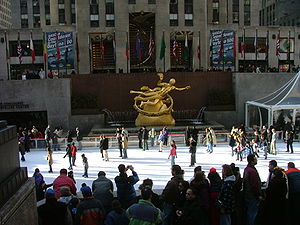 An ice rink (or ice skating rink) is a frozen body of water and/or hardened chemicals where people can ice skate or play winter sports. Besides recreational ice skating, some of its uses include ice hockey, bandy, rink bandy, ringette, broomball, speed skating, figure skating, ice stock sport and curling as well as exhibitions, contests and ice shows. There are two types of rinks in prevalent use today: natural, where freezing occurs from cold ambient temperatures, and artificial (or mechanically frozen), where a coolant produces cold temperatures in the surface below the water, causing the water to freeze. There are also synthetic ice rinks where skating surfaces are made out of plastics.

Rink, a Scottish word meaning 'course', was used as the name of a place where curling was played. The name has been retained for the construction of ice areas for other sports and uses.[1]

Early attempts at the construction of artificial ice rinks were first made in the 'rink mania' of 1841-44. As the technology for the maintenance of natural ice did not exist, these early rinks used a substitute consisting of a mixture of hog's lard and various salts. An item in the 8 May 1844 issue of Littell's Living Age headed "The Glaciarium" reported that "This establishment, which has been removed to Grafton street East' Tottenham Court Road, was opened on Monday afternoon. The area of artificial ice is extremely convenient for such as may be desirous of engaging in the graceful and manly pastime of skating".[citation needed]

By 1844, these venues fell out of fashion, as customers grew tired of the 'smelly' ice substitute, and it was only thirty years later, that refrigeration technology had developed to the point that natural ice could finally be feasibly used in the rink. The world's first mechanically frozen ice rink was the Glaciarium, opened by John Gamgee in a tent in a small building just off the Kings Road in Chelsea, London, on 7 January 1876.[2] In March, it moved to a permanent venue at 379 Kings Road, where a rink measuring 40 by 24 feet was established.[3]

The rink was based on a concrete surface, with layers of earth, cow hair and timber planks. Atop these were laid oval copper pipes carrying a solution of glycerine with ether, nitrogen peroxide and water. The pipes were covered by water and the solution was pumped through, freezing the water into ice. Gamgee had discovered the process while attempting to develop a method to freeze meat for import from Australia and New Zealand, and had patented it as early as 1870.[3]

Gamgee operated the rink on a membership-only basis and attempted to attract a wealthy clientele, experienced in open-air ice skating during winters in the Alps. He installed an orchestra gallery, which could also be used by spectators, and decorated the walls with views of the Swiss Alps.[3]

The rink initially proved a success, and Gamgee opened two further rinks later in the year: at Rusholme in Manchester and the "Floating Glaciarium" at Charing Cross in London, this last significantly larger at 115 by 25 feet. The Southport Glaciarium opened in 1879, using Gamgee's method.[3] 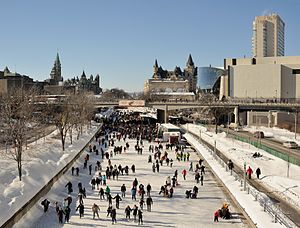 A portion of the Rideau Canal in Ottawa, Canada the world's largest naturally frozen ice rink 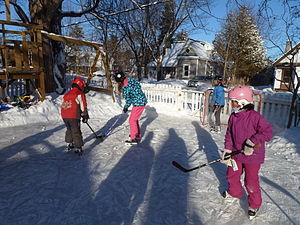 Children playing ice hockey on a backyard rink in Canada

Many ice rinks consist of, or are found on, open bodies of water such as lakes, ponds, canals, and sometimes rivers; these can only be used in the winter in climates where the surface would freeze thickly enough to support human weight. Rinks can also be made in cold climates by enclosing a level area of ground, filling it with water, and letting it freeze. Snow may even be packed to use as a containment material.

A famous example of this type of rink is the Rideau Canal Skateway in Ottawa, Canada, estimated at 1,782,000 square feet (165,600 m2) and 7.8 kilometres (4.8 mi) long, which is equivalent to 90 Olympic size skating rinks.[4] The rink is prepared by lowering the canal's water level and letting the canal water freeze. The rink is then resurfaced nightly by cleaning the ice of snow and flooding it with water from below the ice. The rink is recognized as the "world's largest naturally frozen ice rink" by the Guinness Book of World Records because "its entire length receives daily maintenance such as sweeping, ice thickness checks and there are toilet and recreational facilities along its entire length".[4] 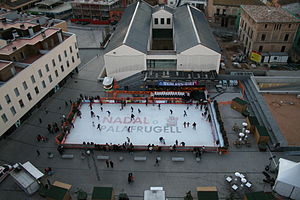 In any climate, an arena ice surface can be installed in a properly built space. This consists of a bed of sand or occasionally a slab of concrete, through (or on top of) which pipes run. The pipes carry a chilled fluid (usually either a salt brine or water with antifreeze, or in the case of smaller rinks, refrigerant) which can lower the temperature of the slab so that water placed atop will freeze. This method is known as 'artificial ice' to differentiate from ice rinks made by simply freezing water in a cold climate, indoors or outdoors, although both types are of frozen water. A more proper technical term is 'mechanically frozen' ice.

A famous example of this type of rink is the outdoor rink at Rockefeller Center in New York. 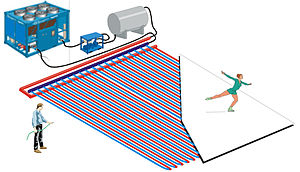 Simple drawing of the main components of an ice skating rink

Modern rinks have a specific procedure for preparing the surface. With the pipes cold, a thin layer of water is sprayed on the sand or concrete to seal and level it (or in the case of concrete, to keep it from being marked). This thin layer is painted white or pale blue for better contrast; markings necessary for hockey or curling are also placed, along with logos or other decorations. Another thin layer of water is sprayed on top of this. The ice is built up to a thickness of 3/4ths an inch to 1 1/2 inches.[6] The industry standard in the NHL is around 1 1/2".

Synthetic rinks are constructed from a solid polymer material designed for skating using normal metal-bladed ice skates. High density polyethelene (HDPE) and ultra-high molecular weight polyethylene (UHMW) are the only materials that offer reasonable skating characteristics, with UHMW synthetic rinks offering the most ice-like skating but also being the most expensive. A typical synthetic rink will consist of many panels of thin surface material assembled on top of a sturdy, level and smooth sub-floor (anything from concrete to wood or even dirt or grass) to create a large skating area.

Periodically after the ice has been used, it is resurfaced using a machine called an ice resurfacer (sometimes colloquially referred to as a Zamboni - who are a major manufacturer of such machinery). For curling, the surface is 'pebbled' by allowing loose drops of cold water to fall onto the ice and freeze into rounded peaks.

Between events, especially if the arena is being used without need for the ice surface, it is either covered with a heavily insulated floor or melted by allowing the fluid in the pipes below the ice to warm.

A highly specialized form of rink is used for speed skating; this is a large oval (or ring) much like an athletic track. Because of their limited use, speed skating ovals are found in much fewer numbers than the more common hockey or curling rinks.

Those skilled at preparing arena ice are often in demand for major events where ice quality is critical. The popularity of the sport of hockey in Canada has led its icemakers to be particularly sought after. One such team of professionals was responsible for placing a loonie coin under center ice at the 2002 Winter Olympics in Salt Lake City, Utah; as both Canadian teams (men's and women's) won their respective hockey gold medals, the coin was christened "lucky" and is now in the possession of the Hockey Hall of Fame[7] after having been retrieved from beneath the ice. 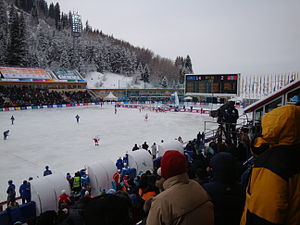 There are basically two rink sizes in use, although there is a great deal of variation in the dimensions of actual ice rinks. Historically, earlier ice rinks were smaller than today. 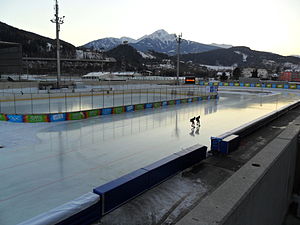