An ice storm is a type of winter storm characterized by freezing rain, also known as a glaze event or, in some parts of the United States, as a silver thaw.[1] The U.S. National Weather Service defines an ice storm as a storm which results in the accumulation of at least 0.25-inch (6.4 mm) of ice on exposed surfaces.[2] From 1982 to 1994, ice storms were more common than blizzards and averaged 16 per year.[3] They are not violent storms, but instead commonly perceived as gentle rains occurring at temperatures just below freezing. For this reason people may be unaware of the danger if it happens overnight. 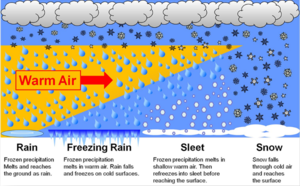 A graph showing the formation of different kinds of precipitation.

The formation of ice begins with a layer of above-freezing air above a layer of sub-freezing temperatures closer to the surface. Frozen precipitation melts to rain while falling into the warm air layer, and then begins to refreeze in the cold layer below. If the precipitate refreezes while still in the air, it will land on the ground as sleet. Alternatively, the liquid droplets can continue to fall without freezing, passing through the cold air just above the surface. This thin layer of air then cools the rain to a temperature below freezing (0 °C or 32 °F). However, the drops themselves do not freeze, a phenomenon called supercooling (or forming "supercooled drops"). When the supercooled drops strike ground or anything else below 0 °C (32 °F) (e.g. power lines, tree branches, aircraft), a layer of ice accumulates as the cold water drips off, forming a slowly thickening film of ice, hence freezing rain.[4][5][6]

While meteorologists can predict when and where an ice storm will occur, some storms still occur with little or no warning.[5] In the United States, most ice storms are in the northeastern part of the country, but damaging storms have occurred farther south. An ice storm in February 1994 resulted in tremendous ice accumulation as far south as Mississippi, and caused reported damage in nine states. More timber was damaged than that caused by Hurricane Camille. An ice storm in eastern Washington in November 1996 directly followed heavy snowfall. The combined weight of the snow and 25 to 37 millimeters (0.98 to 1.46 in) of ice caused widespread damage and was considered the most severe ice storm in the Spokane area since 1940.[3] 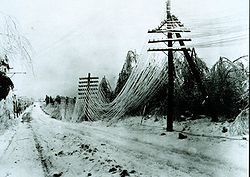 Wires sagging after an ice storm. Besides disrupting transportation, ice storms can disrupt utilities by snapping lines and poles.

The freezing rain from an ice storm covers everything with heavy, smooth glaze ice. In addition to hazardous driving or walking conditions, branches or even whole trees may break from the weight of ice. Falling branches can block roads, tear down power and telephone lines, and cause other damage. Even without falling trees and tree branches, the weight of the ice itself can easily snap power lines and also break and bring down power/utility poles; even electricity pylons with steel frames. This can leave people without power for anywhere from several days to a month. According to most meteorologists, just one quarter of an inch of ice accumulation can add about 500 pounds (230 kg) of weight per line span. Damage from ice storms is easily capable of shutting down entire metropolitan areas. 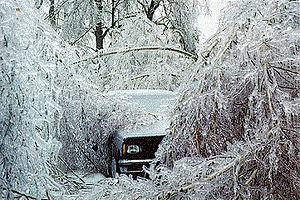 Devastation caused by an ice storm

Additionally, the loss of power during ice storms has indirectly caused numerous illnesses and deaths due to unintentional carbon monoxide (CO) poisoning. At lower levels, CO poisoning causes symptoms such as nausea, dizziness, fatigue, and headache, but high levels can cause unconsciousness, heart failure, and death.[7] The relatively high incidence of CO poisoning during ice storms occurs due to the use of alternative methods of heating and cooking during prolonged power outages, common after severe ice storms.[8] Gas generators, charcoal and propane barbecues, and kerosene heaters contribute to CO poisoning when they operate in confined locations.[7] CO is produced when appliances burn fuel without enough oxygen present,[9] such as basements and other indoor locations.

Loss of electricity during ice storms can indirectly lead to hypothermia and even death from hypothermia. It can also lead to ruptured pipes due to water freezing inside the pipes.

An ice storm which struck northern Idaho in January 1961 set a record for thickest recorded ice accumulation from a single storm in the United States, at 8 inches.[10][11]

In March 1991, a major ice storm in the area of Rochester, NY caused $375 million in damages, placing it among the worst natural disasters in New York State history.[12]

In February 1994, a severe ice storm caused over $1 billion in damage in the Southern United States, primarily in Mississippi, Tennessee, and Alabama. [13]

The North American ice storm of 1998 occurred during January 5–9, 1998. It was one of the most devastating and costly ice storms in North American history and potentially one of the most devastating ice storms in modern history. The storm caused massive power failures in several large cities on the East Coast of the United States. The most affected area was extreme eastern Ontario and southwestern Quebec in Canada, where over 3 million people were without power for up to a month and a half. Whole trees snapped and electrical pylons were completely flattened under the weight of the accumulated ice.[14]

The Northeastern United States was impacted by a major ice storm on December 11–12, 2008, which left about 1.25 million homes and businesses without power. Areas impacted with 3⁄4 to 1 in (19 to 25 mm) of ice accumulation included eastern New York in the Albany area, central and western Massachusetts, southern New Hampshire, coastal and south-central Maine, Pennsylvania in the Pocono Mountains region, northwestern Connecticut, and southern Vermont. Southern New Hampshire and northernmost Massachusetts got hit the worst with the storm with ice accumulations ranging from 1.5 to 3 in (38 to 76 mm) of ice. This left residents unable to get supplies, go to work etc. due to blocked roads from trees that fell on the roads. Any trees that fell quickly took down power poles. It took utility crews from 4 to as many as 16 days to get a look at the damage and start to restore power to nearly 1.3 million people. In all there were 675,000 residents in New Hampshire without power and around 500,000 in northern Massachusetts.[citation needed]

In late January 2009 ice storms covered several U.S. states, including Arkansas and Kentucky. Most areas affected saw over 2 in (51 mm) of ice accumulation, and between 1–5 in (25–127 mm) of snow on top of the ice. This ice storm left well over 2 million people without power at its peak and killed 55 people, 24 in Kentucky.[15] Rural Water Associations in Arkansas and Kentucky activated emergency response plans to deal with power loss to small water utilities across their states. Neighboring state Rural Water Associations, including experienced emergency responders from Louisiana and Florida, loaned equipment and manpower to assist the hardest-hit areas.[16][17]

During the unusually severe Winter of 2009–10 in Great Britain and Ireland, heavy snow had fallen over much of the country in late December and early January. By the second week of January, many of the roads and pavements had been cleared by local councils due to the use of rock salt gritting. However, during the early hours of January 12, a wet front[clarification needed] moved across the country, causing freezing rain and heavy ice glaze, particularly in the South and West Yorkshire areas of Northern England (crucially, this rainfall had stopped before first light). When the local population prepared to set out for work and school, they saw from their windows what appeared to be clear roads and pavements but were in fact treacherous sheets of black ice. Cars and buses almost immediately encounted extreme difficulty, and emergency services were called to dozens of accidents. Pedestrians in the village of Holmfirth found the only safe way to proceed was to crawl on all fours.[18] Accident and emergency units at hospitals in the Sheffield, Rotherham, and Barnsley areas found themselves inundated by people with broken bones, fractures, and sprains, and many schools were closed as it was judged unsafe for pupils to attempt to make their way there.

On December 25, 2010, freezing rain fell on Moscow and its vicinity. The glaze ice accumulation caused a number of accidents and power outages, of which the most serious was damage caused to two power lines feeding Domodedovo Airport, causing a complete blackout of the airport and express railway that connected it to the city. As a result, the airport was shut down and hundreds of passengers were stranded inside, with taxi drivers charging up to 10,000 rubles (USD 330) for a one-hour drive to the city.[19] Other city airports, Sheremetyevo and Vnukovo, where air traffic was re-routed and amid heavy snowfall that followed ice rain, collapsed a day later, causing a full air transport collapse.

Toronto 2014. It took power away from the whole city, some for more than a week. It was considered the most expensive natural disaster in the city's history.