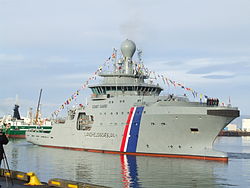 The Icelandic Coast Guard (Icelandic: Landhelgisgæsla Íslands, Landhelgisgæslan or simply Gæslan) is the service responsible for Iceland's coastal defense and maritime and aeronautical search and rescue. Its origins can be traced to 1859, when the corvette Ørnen started patrolling Icelandic waters. In 1906, Iceland's first purposely built guard-ship, Islands Falk, began operation. Iceland's own defense of its territorial waters began around 1920 and the Icelandic Coast Guard was formally founded on July 1, 1926. The first cannon was put on the trawler Þór in 1924 and on June 23, 1926 the first ship built for the Coast Guard, named Óðinn, arrived in Iceland. Three years later, on the 14 July 1929 the coastal defence ship Ægir was added to the Coast Guard fleet.

The Icelandic Coast Guard played its largest role during the Cod Wars between 1972 and 1975, when the Coast Guard ships would cut the trawl wires of British and West German trawlers and engaged in confrontations with Royal Navy warships, in order to enforce a disputed expansion on Icelandic fishing territory. 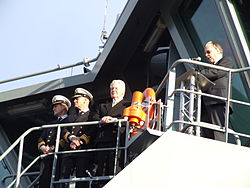 The Icelandic Coast Guard's (ICG) primary mission is the defending the Icelandic sovereignty, integrity of the territorial waters, maintaining Icelandic law and order inside the 200 nm wide Economic zone as well as other vital missions such as Search and Rescue. The Coast Guard operates JRCC-Iceland which is responsible for search and rescue of vessels and aircraft in Iceland's search and rescue region (SRR) according to International Aeronautical and Maritime Search and Rescue (IAMSAR) Manual. Additionally the ICG is in the charge of defusing naval mines, most of which were laid during the Second World War, and monitoring fisheries in International waters outside of the Icelandic Economic zone in order to blacklist any vessel partaking in unregulated fishing and thus bar them from receiving services from any member of the North East Atlantic Fisheries Commission[7] in order to make unregulated fishing unprofitable. The Icelandic Coast Guard also occasionally operates within Greenlandic and Faeroese waters, following a bilateral agreement with Denmark regarding mutual aid in security, rescue and defence matters.

The Coast Guard accomplishes these tasks with the use of offshore patrol vessels (OPV), helicopters, surveillance aircraft, satellites and a network of land based surface scanning radar.

The Icelandic Coast Guard is also in charge of the Iceland Air Defence System, which operates four ground-based AN/FPS-117v5 air surveillance radars and a control and command centre.

In the 1990s the Coast Guard started hosting exercises such as "Northern Challenge" which had military units from Norway, Denmark, Sweden and the United Kingdom, among others, participating along with the Icelandic Coast Guard. The Coast Guard has also taken part in Peacekeeping Operations on behalf of the Icelandic Crisis Response Unit, although while usually using their own rank insignia, uniforms and weapons.

The fleet also takes part in Frontex operations, and in that role ICGV Týr played a major part in the rescue of over 300 Syrian refugees in the eastern Mediterranean Sea in January 2015.[8]

Currently the Icelandic Coast Guard fleet consists of three offshore patrol vessels (OPV), one coastal hydrographic and patrol vessel and an independent Fast RHIB, as well as numerous smaller boats assigned to the larger units. In 2011 the Coast Guard received the new ICGV Þór built by the Asmar shipyard in Talcahuano, Chile.[9][10]

ICGV Týr, an Ægir-class, is the second youngest, built by Århus Flydedok a/s and launched in 1975. ICGV Ægir an Ægir-class is ICGV Týr's sister-ship, built by Ålborg Værft a/s and launched in 1968. Each ship is equipped with two or more rigid inflatable boats of various sizes and armed with a 40 mm Bofors cannon. Various kinds of small-arms as well as other man portable weapons are also carried onboard each of the ships. Týr and Þór are also equipped with sonar systems and the Ægir class sisterships have flight decks and a hangar for a small helicopter. While the Coast Guard currently doesn't operate small enough helicopters to use the hangars, the flight decks are often used by the helicopters of the Aeronautical Division on various missions. The coast guard has as well a 64-ton hydrographic survey boat, named Baldur, it was built by Vélsmiðja Seyðisfjarðar in 1991. This vessel has no mounted weaponry but it has nonetheless been used for port security and fishery inspection.

The Coast Guard's Aeronautical Division was founded on December 10, 1955 when a Consolidated PBY-6A Catalina flying boat was acquired. It was originally from the Iceland Defense Force but was damaged near Langanes in 1954. It was registered as TF-RAN and nicknamed Rán.

The Coast Guard also operates a single Bombardier DHC-8-Q314, registered as TF-SIF, modified for maritime surveillance and reconnaissance. This plane has been extensively modified by FIELD to carry a modern Mission Management System and suite of surveillance sensors, air operable door and communications/navigation equipment. It is occasionally also used for surveillance of volcanic eruptions, e.g. of Eyjafjallajökull in 2010.

Unlike the fleet, aircraft of the Icelandic Coast Guard have standard Icelandic civilian registers, as the Alþingi (parliament) has never agreed on laws for military or government aircraft. Over the time since the division was formed the regulations for standard civilian aircraft have become more restrictive. As a result, the Coast Guard can no longer operate military aircraft like it did in the past. Nevertheless, current helicopters are outfitted with latest generation U.S. night vision equipment, reserved for U.S. armed forces and the armies of their allies and thus the only civilian registered aircraft in the world, so equipped.[citation needed] 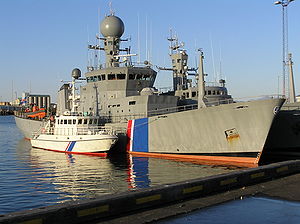 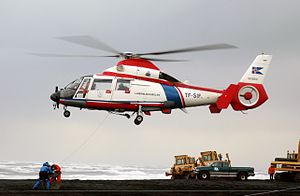 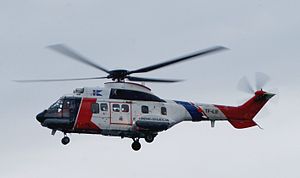 All major vehicles of the Icelandic Coast Guard are currently named after beings from norse mythology.

Other historical vessels that haven't adhered to the Norse mythology tradition

In addition the Coast Guard has rented or borrowed a number of civilian vessels and aircraft for shorter periods, which are not listed.

The Icelandic Coast Guard possesses 212 firearms, most of which are in storage.[13][14]