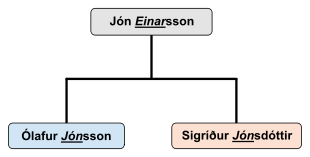 Icelandic names differ from most current Western family name systems by being patronymic (occasionally matronymic): they reflect the father (or mother) of the child and not the historic family lineage. Iceland shares a common cultural heritage with the Scandinavian countries of Norway, Sweden and Denmark with the Faroe Islands. Icelanders, however, unlike other Scandinavians, have continued to use their traditional name system, which was formerly used by all Nordic nations.[lower-alpha 1] The Icelandic system is thus not based on family names (although some people do have family names and might use both systems). Generally, a person's last name indicates the first name of his/her father (patronymic) or in some cases mother (matronymic).

Some family names do exist in Iceland, most commonly adaptions from last name patronyms Icelanders took up when living abroad, usually Denmark. Notable Icelanders who have an inherited family name include former prime minister Geir Haarde, football star Eiður Smári Guðjohnsen, actor Magnús Scheving, film director Baltasar Kormákur Samper, actress Anita Briem and member of parliament (and former news reporter) Elín Hirst. Before 1925, it was legal to adopt new family names; one Icelander to do so was the Nobel Prize-winning author Halldór Laxness, while another author, Einar Hjörleifsson and his brothers all chose the family name "Kvaran". Since 1925, one cannot adopt a family name unless one explicitly has a legal right to do so through inheritance.[2] (The law was amended in 1991 and 1996.[3])

First names not previously used in Iceland must be approved by the Icelandic Naming Committee (Icelandic: Mannanafnanefnd) before being used.[4] The criterion for acceptance of names is whether or not they can be easily incorporated into the Icelandic language. With some exceptions, they must contain only letters found in the Icelandic alphabet (including þ and ð), and it must be possible to decline the name according to the language's grammatical case system, which in practice means that a genitive form can be constructed in accordance with Icelandic rules.

Gender-inappropriate names are normally not allowed; however, in January 2013, a 15-year-old girl named Blær (a masculine noun in Icelandic) was allowed to keep this name in a court decision that overruled an initial rejection by the naming committee.[5] Her mother Björk Eiðsdóttir didn't realize at the time that Blær was considered masculine, rather, she had read a novel by Halldór Laxness, The Fish Can Sing, 1957, that had an admirable female character named Blær, meaning “light breeze”, and had decided that if she had a daughter, she would name her Blær.[6]

In some cases, an individual’s surname is derived from a parent's middle name instead of the first name. For example, if Jón is the son of Hjálmar Arnar Vilhjálmsson he may either be named Jón Hjálmarsson (Jón, son of Hjálmar) or Jón Arnarsson (Jón, son of Arnar). The reason for this may be that the parent prefers to be called by the middle name instead of the first name; this is fairly common. It may also be that the parent’s middle name seems to fit the child’s first name better.

In cases where two people in the same social circle bear the same first name and the same father’s name, they have traditionally been distinguished by their paternal grandfather’s name, e.g. Jón Þórsson Bjarnarsonar (Jón, son of Þór, son of Bjarni) and Jón Þórsson Hallssonar (Jón, son of Þór, son of Hallur). This practice has now become less common (the use of middle names having replaced it), but features conspicuously in the Icelandic sagas.

Matronymic naming as a choice

The vast majority of Icelandic last names carry the name of the father, but occasionally the mother's name is used: e.g. if the child or mother wishes to end social ties with the father. Some women use it as a social statement while others simply choose it as a matter of style.

In all of these cases, the convention is the same: Ólafur, the son of Bryndís, will have the full name of Ólafur Bryndísarson ("the son of Bryndís"). One well-known Icelander with a matronymic name is football player Heiðar Helguson ("Helga's son"), another is novelist Guðrún Eva Mínervudóttir ("Minerva's daughter"). One medieval example is the poet Eilífr Goðrúnarson ("Goðrún's son").

In the Icelandic film Bjarnfreðarson the title character's name is the subject of some mockery for his having a woman's name – as Bjarnfreður's son – not his father's. In the film this is connected to her radical feminism and shame over his paternity, which form part of the film's plot.[7] Some people have both a matronymic and a patronymic: for example, Dagur Bergþóruson Eggertsson ("the son of Bergþóra and Eggert"), the current mayor of Reykjavík. Same with the girl Blær above, who won the right to use this name—her full name is Blær Bjarkardóttir Rúnarsdóttir (Blær, Björk's and Rúnar's daughter).

These were the 20 most common surnames in 2002. Number of people who carry them in parentheses.[citation needed]

Cultural ramifications – how to address people

In Iceland, listings such as the telephone directory are alphabetised by first name rather than surname. To reduce ambiguity, the telephone directory goes further by also listing professions. In Russia, where name-patronyms of similar style were historically used (such as Ivan Petrovich), the much larger population necessitated the introduction of surnames, and delegated the patronymic to record-keeping middle-name and conversational honorific.

In the case of two people in the same group having the same given name, perhaps one named Jón Stefánsson and the other Jón Þorláksson, one could address Jón Stefánsson as "Jón Stefáns" and Jón Þorláksson as "Jón Þorláks". When someone holds a conversation with these two people at the same time, the appendage "son" would not need to be used; in that case, the father's name could be used like a nickname, although it is just as common in such cases to refer to people by their middle names (having a middle name being nowadays the general rule for people with a common name like 'Jón').

While the name of Icelandic singer Björk is generally perceived as her stage name, it is actually simply her first name (her full name is Björk Guðmundsdóttir). Björk is how any Icelander would address her, whether formally or casually.

As a result of the vast majority of people using patronymics, a family will normally have a variety of last names: the children of (married or unmarried) parents Jón Einarsson and Bryndís Atladóttir could be named Ólafur Jónsson and Katrín Jónsdóttir. With matronymics, the children in this example would be Ólafur Bryndísarson and Katrín Bryndísardóttir. Patronymics thus have the formula (genitive case of father's name, usually adding -s) + son/dóttir, whereas matronymics are (genitive case of mother's name, often -ar, or if the name ends in -a, it will change to -u) + son/dóttir.

The Icelandic naming system occasionally causes problems for families travelling abroad, especially with young children, since non-Icelandic immigration staff (apart from those of other Nordic countries) are usually unfamiliar with the practice and therefore expect children to have the last names of their parents.

However, people of Icelandic descent who live in foreign countries, such as the significant Icelandic community in the Canadian province of Manitoba, usually abandon the traditional Icelandic naming system. In most cases, they adapt to the naming conventions of their country of residence—most commonly by retaining the patronymic of their first ancestor to immigrate to the new country as a permanent family surname, much as other Scandinavian immigrants did before surnames became fully established in their own countries.[8]