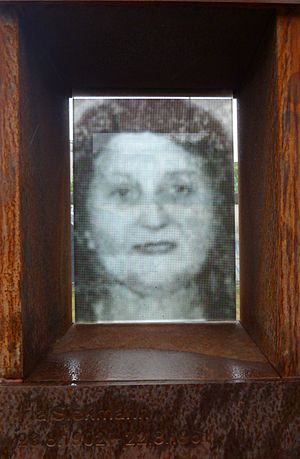 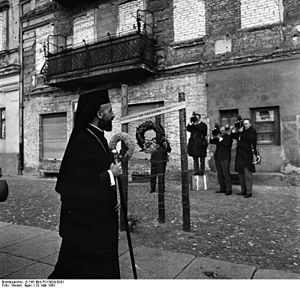 Makarios III , President of Cyprus, at the Siekmann memorial (1962) 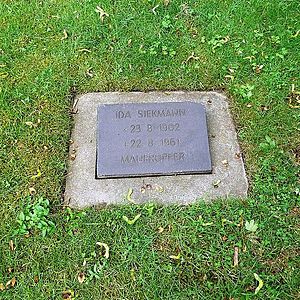 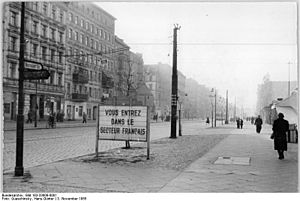 Bernauer Straße in 1955, including Bernauer Straße 48, with annotations (on the Wikimedia Commons page) showing Ida Siekmann's front door, and the 4th floor window that she jumped from 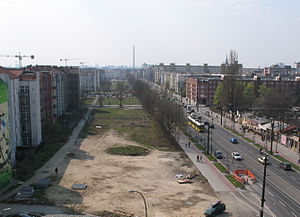 Ida Siekmann was born in Gorken near Marienwerder (West Prussia) (now Górki, Kwidzyn County, Poland). She had moved to Berlin where she worked as a nurse,[1] and lived at Bernauer Strasse 48 in the center of Berlin.[2] She had a sister, Martha L., who lived only a few blocks away, on Lortzingstraße.[3] As of August 1961, she was already a widow;[4] it is not known when she was actually widowed.

After World War II, Berlin was divided in four Allied sectors. While the street and the sidewalk of the Bernauer Straße lay in the French sector of West Berlin, the frontage of the buildings on the southern side lay in the Soviet sector of East Berlin. Until 13 August 1961, the day the Berlin Wall was built, Siekmann crossed the sector’s border just by leaving her house.[2] Her sister's apartment was also in the French Sector of West Berlin.[3]

Immediately after the border between East and West Berlin was closed on 13 August 1961, numerous families and individuals from 50 Bernauer Straße addresses fled to the West.[5] On 18 August 1961, Walter Ulbricht ordered the East German border troops to brick up the entrances and windows on the ground floor of the houses on the southern side of the street. Members of the Combat Groups of the Working Class and police controlled every person who tried to enter the houses and the residents were subject to rigid controls, even in the hallways. Many residents of such tenements still fled to West Berlin: residents of the upper floors were often rescued by jumping-sheets of the West Berlin fire department.[2] On 21 August, the entrance and windows of Bernauer Straße 48 were barred. In the early morning of 22 August, Siekmann, living on the fourth floor (dritter Stock/Obergeschoss), threw eiderdowns and some possessions down onto the street and jumped out of the window of her apartment before the firefighters were able to open the jumping-sheet.[6][7][8] She fell on the sidewalk and was severely injured. Siekmann died shortly after on her way to the Lazarus Hospital, thus becoming the first casualty at the Berlin Wall.[5][6]

Siekmann was buried at the Seestraße cemetery on 29 August; in September a memorial was erected at Bernauer Straße 48. The memorial was often visited by foreign politicians (including Robert Kennedy and Archbishop Makarios) to honour the victims of the Berlin Wall.[2]

The houses at the southern Bernauer Straße were torn down in 1963 and replaced by a concrete wall.