Ilham Heydar oghlu Aliyev (Azerbaijani: İlham Heydər oğlu Əliyev; born 24 December 1961) is the fourth and current President of Azerbaijan, in office since 2003. He also functions as the Chairman of the New Azerbaijan Party and the head of the National Olympic Committee. Ilham Aliyev is the son of Heydar Aliyev, who was President of Azerbaijan from 1993 to 2003.

Ilham Aliyev married Mehriban Aliyeva in Baku on 22 December 1983. They have three children: Leyla, Arzu and Heydar. Apart from his native Azerbaijani, he is fluent in English, French, Russian and Turkish.[1]

In May or June 1994, Ilham Aliyev was appointed as vice-president of the State Oil Company of Azerbaijan (SOCAR). He participated as one of the key figures during the negotiations between the Azerbaijani government and Western oil companies during the conclusion of new contracts now known as the "Contract of the Century". In 1995, Aliyev was elected to the National Assembly of Azerbaijan; later he became president of the National Olympic Committee (still incumbent) and head of the Azerbaijan delegation to the Council of Europe. In August 2003, two months prior to the presidential elections, he was appointed as Prime Minister.[2] In October 2003, Heydar Aliyev, suffering failing health, stepped down as President.[3] 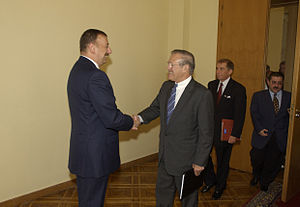 Ilham Aliyev was re-elected in 2008 with 87% of the polls, while opposition parties boycotted the elections. In a constitutional referendum in 2009, term limits for the presidency were abolished and freedom of the press was restricted.

In 2009, following his reelection as president, Aliyev passed a referendum which removed the presidential consecutive term limit, thereby allowing him to run for president as many times as he wishes. The opposition claimed this to be a violation of the Azerbaijani constitution and the European Convention on Human Rights.[5]

The 2010 parliamentary elections produced a Parliament completely loyal to Aliyev: for the first time in Azerbaijani history, not a single candidate from the main opposition Azerbaijan Popular Front or Musavat parties was elected. The Economist subsequently scored Azerbaijan as an authoritarian regime, at 140th place (out of 167) in its 2011 Democracy Index.[6]

Repeated protests were staged against Aliyev's rule in 2011, calling for more democracy and the ouster of the government. Aliyev responded by ordering a security crackdown, using force to crush attempts at revolt in Baku. Officials loyal to the president dismissed protesters' comparison of Azerbaijan to other countries considered to be part of the same revolutionary wave that rocked North Africa and Western Asia beginning in December 2010, and Aliyev rejected the precedent set by leaders in Armenia, Oman, Jordan, and other affected states by refusing to make concessions. Well over 400 Azerbaijanis were arrested after protests began in March 2011.[7] Opposition leaders, including Musavat's Isa Gambar, vowed to continue demonstrating, although police had little difficulty stopping protests almost as soon as they began.[8] Amnesty International in its Media Briefing of 2012 reported that the "crackdown on the free speech has intensified in recent years". The report highlighted that "In Azerbaijan, people who exercise this fundamental right [freedom of speech] to criticise President Ilham Aliyev, his family or government, risk being threatened, attacked or imprisoned – whether they do so on- or off-line".[9]

In the 2013 presidential elections, held on 9 October, Aliyev won with 85 percent of the vote, thus securing a third five-year term.[10] A day before voting began, a smartphone application run by the Central Election Commission showed Aliyev winning the election with 72.76 percent of the vote, suggesting that the election results were prefabricated. Azerbaijani officials claimed the results were those of the 2008 election, yet the candidates listed were from the 2013 ballot.[11] Aliyev's main rivals in the election were Jamil Hasanli and Igbal Agazade.

In 2013, Ilham Aliyev faced criticism from the United States and Amnesty International for election 'irregularities' along with crackdowns against journalists and opposition activists, including the jailing of election monitors.[12] 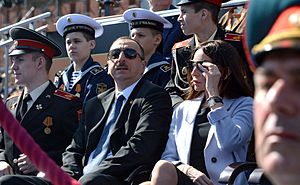 Ilham Aliyev with his first lady during the Moscow Victory Day Parade, 9 May 2015

Ilham Aliyev's image remains largely controversial. He has been criticized for his authoritarian rule[13][14][15] and sometimes described as the head of corruption in Europe by analysts and political commentators.[16][17][18][19][20][21] Aliyev's government has been listed as one of the most corrupt in Europe by Transparency International.[22][23] 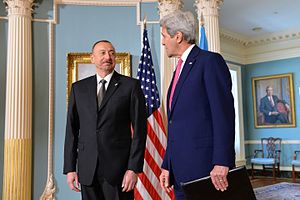 On March 26, 2005, Aliyev was officially elected as the ruling New Azerbaijan Party chairman. The opposition denounced this as a violation of state laws, because according to the law on political parties, the president should have no party affiliation.[citation needed]

In April 2006, President Aliyev made a state visit to Washington, D.C. It was a remarkably successful trip, at least in terms of image. Speaking at a public forum sponsored by the prestigious Council on Foreign Relations, Aliyev discussed oil, economic development, and democracy with an audience of reporters and others. The visit was capped with a private meeting in the White House with President George W. Bush, who told reporters that their discussion was "really interesting", although he also said the meeting was "candid" – sometimes a code word for "tense". Opposition groups said that an official meeting with President Bush sent an inappropriate signal that the violence and intimidation of the 2005 parliamentary election was now a closed matter.[24]

In 2010, WikiLeaks uncovered a diplomatic cable dispatched by the US Embassy in the Republic of Azerbaijan, part of the cache of documents obtained by the WikiLeaks website, that explicitly compared Azerbaijani President Ilham Aliyev to a mafia crime boss, leaving many to wonder if his government was actually democratic and whether people truthfully believed that Azerbaijan does not repress minority populations.[25] A number of groups have also complained to the Commission on Human Rights for the purpose of adopting a resolution, which urges Azerbaijan to guarantee the preservation of the cultural, religious and national identity of the Talysh people in light of repeated claims of repression.[26]

In 2012, Aliyev convinced the government of Hungary to transfer convicted murderer Ramil Safarov to Azerbaijan to complete the rest of his prison term. While attending a NATO-sponsored English-language course in Hungary, Safarov had murdered an Armenian lieutenant who was also taking the course, Gurgen Margaryan, while Margaryan was asleep. Safarov had been tried and sentenced to life imprisonment in Hungary. However, after being extradited to Azerbaijan, Safarov received a hero's welcome; he was promoted to the rank of major, and given an apartment and over eight years of back pay, covering the time he had spent in jail.[27][28] 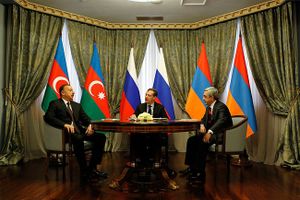 Statements about Armenia and Nagorno-Karabakh

Aliyev has been cited as calling all Armenian people in the world as the enemies of Azerbaijan,[29][30][31] and as regularly threatening to take over the disputed region of Nagorno-Karabakh and the entire Armenian Republic through military force.[32][33][34]

In 2008, Aliyev declared that “Nagorno Karabakh will never be independent; the position is backed by international mediators as well; Armenia has to accept the reality" and that "in 1918, Yerevan was granted to the Armenians. It was a great mistake. The khanate of Iravan was the Azeri territory, the Armenians were guests there."[35] 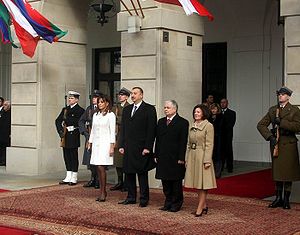 Aliyev with his wife during their visit to Poland.

In 2012 the Organized Crime and Corruption Reporting Project (OCCRP) named Ilham Aliyev Person of the Year (a title bestowed for figuring prominently in 2012 on stories on crime and corruption) after "well-documented evidence" revealed that "his family has secret ownership stakes in the country’s largest businesses including bank, construction companies, gold mines and phone companies".[36] According to ICIJ latest report, Aliyev's family has been a shareholder of big offshore companies.[37] As reported by The Washington Post and Mail Online, Aliyev's two daughters share a property portfolio of about £50 million – across Dubai, Paris and London and Aliyev's 11-year-old son in Dubai owns "nine waterfront mansions" with a total price of "about $44 million – or roughly 10,000 years' worth of salary for the average citizen of Azerbaijan".[38][39][40][41]

Despite Aliyev's being born a Shia Muslim, his government has cracked down on shows of Shia religiosity in Azerbaijan. Religious Shia politicians and ulama (scholars) deemed "dangerous" have been arrested, Shia organizations disbanded and religious manifestations violently broken up by the Azeri police.[42]

On 3 April 2016 an International Consortium of Investigative Journalists (ICIJ) released leak of documents on offshore companies created by the Panamanian law firm Mossack Fonseca. It revealed Aliyev's family ties to offshore companies controlling major sectors of Azerbaijan's economy.[43] According to leakage "The family of Azerbaijan President Ilham Aliyev leads a charmed, glamorous life, thanks in part to financial interests in almost every sector of the economy. His wife, Mehriban, owns banks, insurance and construction companies, a television station and a line of cosmetics. Their eldest daughter, Leyla, editor of Baku magazine, and her sister, Arzu, have financial stakes in a firm that won rights to mine for gold in the western village of Chovdar and Azerfon, the country’s largest mobile phone business. Arzu is also a significant shareholder in SW Holding, which controls nearly every operation related to Azerbaijan Airlines ("Azal"), from meals to airport taxis. Both sisters and brother Heydar own property in Dubai valued at roughly $75 million in 2010; Heydar is the legal owner of nine luxury mansions in Dubai purchased for some $44 million. The president’s sister, Sevil Aliyeva, a longtime London resident, founded Space TV, a news and entertainment channel in Azerbaijan. She is also the owner of a BVI company, which registration lists her at an address in a West London neighborhood where average home prices touch $9 million." 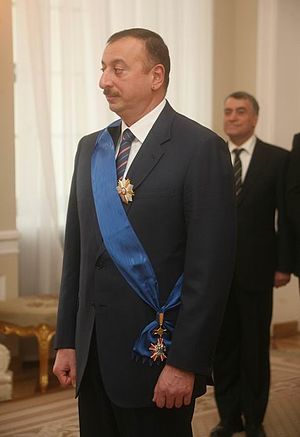 The mark ° shows honours mention on his official website[59]