listen), born 19 July 1946) is a Romanian former world No. 1 professional tennis player, one of the world's top players of the 1970s. Năstase was ranked world No. 1 between 1973 (23 August) and 1974 (2 June). He is one of the five players in history to win more than 100 ATP professional titles (58 singles and 45 in doubles).[1] He was inducted into the International Tennis Hall of Fame in 1991. Năstase won seven Grand Slam titles: two in singles, three in men's doubles, and two in mixed doubles. He also won four Masters Grand Prix year-end championship titles and seven Championship Series titles (1970–73), the precursors to the current Masters 1000. In 2005, Tennis magazine ranked him as the 28th-best player of the preceding 40 years. He is the second male player to win a Grand Slam event without dropping a set and the first one to achieve this feat at the French Open (1973). 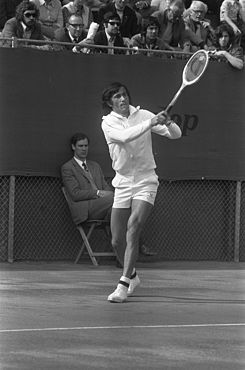 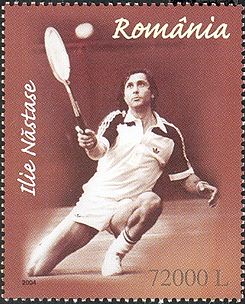 Năstase on a 2004 Romanian stamp

At the beginning of his career in 1966, Năstase travelled around the world competing with his good friend Ion Țiriac. Together, they represented Romania in the Davis Cup competition, being three times runners up: in 1969, 1971, and 1972.

In singles, Năstase won his first tournament at Cannes on 16 April 1967. His first victories against top players happened in 1969 in Stockholm, where he defeated Tony Roche and Stan Smith.

Năstase became one of the best players in 1970, with many experts ranking him as the sixth-best player in the world at that time, behind the Australians Rod Laver, Ken Rosewall, John Newcombe, and Roche and the American Arthur Ashe. Năstase's high ranking resulted from his success at the Italian Open in Rome and at the U.S. Indoor Open in Salisbury, Maryland. With Tiriac, Năstase won the men's doubles title at the French Open.

In 1971, Năstase was the runner-up at the French Open. where he lost the final in four sets to Jan Kodeš. In December, Năstase won his first Masters Grand Prix title.

In 1972, he became the no. 2 in the world, owing to his winning the US Open in a five-set final over Arthur Ashe. This tournament was the only event of the year in which all the best players participated. Two months before at Wimbledon, Năstase narrowly lost to Stan Smith in an epic[2] five-set final, one of the most exciting championship matches there.[3] Although Smith took the title, public sympathy lay with the volatile Romanian.[2]

In the Davis Cup, Năstase was undefeated in singles until losing to Stan Smith in the final played on clay in his native Bucharest. In December at the year-end tour finals, Năstase took revenge against Smith, winning his second consecutive Masters Grand Prix title.

In 1974, he was the only player to qualify for both the WCT Finals and the Masters Grand Prix finals. As usual, Năstase played well in the Masters, in particular against Newcombe in the semifinals. (Năstase finished his career with a 4–1 record versus Newcombe, losing only their first match in 1969.) The Romanian, however, lost the final to Guillermo Vilas in five sets.

During the first half of 1976, Năstase won four tournaments (Atlanta WCT, Avis Challenge Cup WCT, US Open Indoor, and La Costa), and head-to-head, he led Connors 2–1, Vilas 1–0, Ashe 1–0, and Borg 2–0. Năstase did not enter the Australian Open, which was again avoided by most of the top players. Năstase was prevented from entering the French Open because he participated in World Team Tennis. In the second half of the year, Nastase lost to Borg in the men's singles final of Wimbledon and in the semifinals of the US Open. Năstase won three other tournaments during the second half of the year, the Pepsi Grand Slam, South Orange, and the four-man tournament of Caracas, Venezuela, in October (not to be confused with the Caracas WCT tournament in March), making seven tournament championships for the year. Năstase was the world No. 3, behind Connors and Borg.

In 1977, Năstase finished no. 9 in the ATP rankings. He was a quarterfinalist at Wimbledon and the French Open and participated in the WCT Finals. Năstase was still one of the 20 best players in 1978. At Wimbledon, he again reached the quarterfinals, losing to Okker after defeating Roscoe Tanner.

During the remainder of his career, Năstase steadily declined and only occasionally defeated a good player, such as Johan Kriek in the third round of the 1982 US Open. Năstase retired from the tour in October 1985 at the age of 39 after playing in the tournament in Toulouse, although he did play the challenger tournament at Dijon in June 1988.

Considered one of the most gifted tennis players in history, Ilie Năstase was noted both for his sorcery with the racket and his ability to entertain, amusing spectators with his antics and mimicry. Even during a crucial phase of a match, he was likely to do something bizarre that would entertain the crowd.[2] Nicknamed the Bucharest Buffoon, Nastase could master all the shots, playing either baseline or serve-and-volley.[1] One of the fastest players, he is remembered for his magnificent lobs and retrieves. Nastase could apply a discomforting spin to his shots, being an expert at putting the ball just beyond an opponent's reach. His greatest weakness was a fragile nervous system and erratic temperament, but when he maintained his concentration during a match, he could conjure up the most devastating tennis,[2] being regarded as a tennis magician[2] or an artist creating with great originality and panache.[1] Năstase pioneered a distinctive tennis shot, a backward, over-the-shoulder wrist-flick useful as a last resort in recovering lobs. Tennis writer Bud Collins dubbed the shot the "Bucharest Backfire" after Năstase.[4]

According to The Independent, Năstase is best remembered for being one of the best players never to win the singles title at Wimbledon, for his tantrums, and his good looks.[5]

Maxim has placed Năstase at number 6 on its top ten "Living Sex Legends" list, as he is reputed to have slept with over 2500 women.[12] Năstase's own guess, which was at 800–900 women, was too low for the writer of his biography who wanted a larger number, to improve his reputation, as it evidently did.[13] After hearing this, his third wife, Amalia, said that she was happy to have conquered such a man. Năstase met Amalia at a Sting concert and married her in a Greek Orthodox ceremony on 5 June 2004 followed by a Civil ceremony in July of the same year. They divorced in February 2010, after six years of marriage.[14] As he played for the Army's sports club Steaua, he was an employee of the Ministry of Defence. Now he has the rank of Major general.

(W) Won tournament; reached (F) final, (SF) semifinal, (QF) quarterfinal; (R#) rounds 4, 3, 2, 1; competed at a (RR) round-robin stage; reached a (Q#) qualification round; (A) absent from tournament; played in a (Z#) Davis/Fed Cup Zonal Group (with number indication) or (PO) play-off; won a (G) gold, (F-S) silver or (SF-B) bronze Olympic medal; a (NMS) downgraded Masters Series/1000 tournament; or (NH) tournament not held.
To avoid confusion and double counting, these charts are updated either at the conclusion of a tournament, or when the player's participation in the tournament has ended.

Qualifying matches and Walkovers are neither official match wins nor losses.

As listed on the ATP website but including titles which predate the formation of the ATP in 1972.

Sources for this section

Here are Năstase's tournament wins that are not included in the statistics on the Association of Tennis Professionals (ATP) website. The website is very incomplete from 1968 to 1970 and has some omissions for tournaments held since 1968.

Năstase won several tournaments during the early years of his career that were equivalent to the present day "challenger" tournaments. Because the term "challenger" started to be applied to second-rank tournaments in 1978, those tournaments are termed "minor tournaments" in the following list.