The Illinois River is a principal tributary of the Mississippi River, approximately 273 miles (439 km) long, in the State of Illinois.[4] The river drains a large section of central Illinois, with a drainage basin of 28,070 square miles (72,701 km2).[3] The drainage basin extends into Wisconsin and Indiana. This river was important among Native Americans and early French traders as the principal water route connecting the Great Lakes with the Mississippi. The French colonial settlements along the river formed the heart of the area known as the Illinois Country. After the construction of the Illinois and Michigan Canal and the Hennepin Canal in the 19th century, the role of the river as link between Lake Michigan and the Mississippi was extended into the era of modern industrial shipping.

The Illinois River is formed by the confluence of the Kankakee River and the Des Plaines River in eastern Grundy County, approximately 10 miles (16 km) southwest of Joliet. This river flows west across northern Illinois, passing Morris and Ottawa, where it is joined by the Mazon River and Fox River. At LaSalle, the Illinois River is joined by the Vermilion River, and then it flows west past Peru, and Spring Valley. In southeastern Bureau County it turns south at an area known as the "Great Bend", flowing southwest across western Illinois, past Lacon, Henry and downtown Peoria, the chief city on the river.

For the last 20 miles (32 km) of its course, the Illinois is separated from the Mississippi River by only about five miles, by a peninsula of land that makes up Calhoun County. The Illinois joins the Mississippi near Grafton, approximately 25 miles (40 km) northwest of downtown St. Louis and about 20 miles upstream from the confluence of the Missouri River and the Mississippi.

The modern channel of the Illinois River was shaped in a matter of days by the Kankakee Torrent. During the melting of the Wisconsin Glacier about 10,000 years ago, a lake formed in present-day Indiana, comparable to one of the modern Great Lakes. The lake formed behind the terminal moraine of a substage of that glacier.[5] Melting ice to the north eventually raised the level of the lake so that it overflowed the moraine. The dam burst, and the entire volume of the lake was released in a very short time, perhaps a few days.

Because of the manner of its formation, the Illinois River runs through a deep canyon with many rock formations. It has an "underutilized channel", one far larger than would be needed to contain any conceivable flow in modern times. 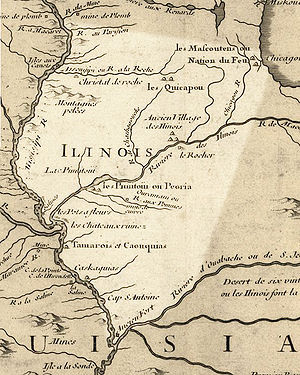 The Illinois River as mapped in 1718, modern Illinois state highlighted.

The Illinois River valley was one of the strongholds of the Illinois Confederation of Native Americans. The French first met the natives here in 1673. The first European settlement in the state of Illinois was the Jesuit mission founded in 1675 by Father Jacques Marquette on the banks of the Illinois across from Starved Rock at the Grand Village of the Illinois. In 1680, René-Robert Cavelier, Sieur de La Salle built the first fort in Illinois, Ft. St. Louis, at Starved Rock. Later it was relocated to the present site of Creve Coeur, near Peoria, where the Jesuits relocated.

The Peoria Riverfront Museum contains a gallery, "Illinois River Encounter," that attempts to interpret the museum through an aquarium tank and displays of the river's geology, ecology, social history, engineering, and commercial use.[6] 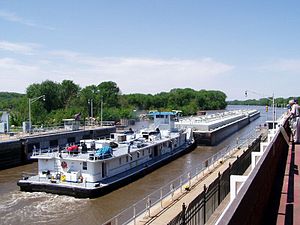 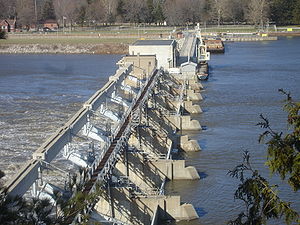 The lock and dam near Starved Rock State Park.

From 1905 to 1915, more freshwater fish were harvested from the Illinois River than from any other river in the United States except for the Columbia River. The Illinois River was once a major source of mussels for the shell button industry. Overfishing, habitat loss from heavy siltation, and water pollution have eliminated most commercial fishing except for a small mussel harvest to provide shells to seed pearl oysters overseas. It is commercially fished downstream of the Rt. 89 bridge at Spring Valley. The Illinois River is still an important sports fishing waterway with a good sauger fishery.

The Illinois forms part of a modern waterway that connects the Great Lakes at Chicago to the Mississippi River. The waterway was originally established by the building of the Illinois and Michigan Canal that connected the Illinois River to the Chicago River. When the Sanitary District of Chicago later reversed the flow of the Chicago River, the pollution and sewage of the city of Chicago flowed down into the Illinois River. The Illinois and Michigan Canal has since been replaced by the Illinois Waterway, including the Chicago Sanitary and Ship Canal. River traffic and flood control is managed by eight locks and dams operated by the U.S. Army Corps of Engineers. As of 2011, all locks and dams on this waterway are closed to visitors for security reasons, except the Starved Rock Visitor Center, which offers an excellent interpretation of the entire system. The waterway is heavily used by barges transporting bulk goods such as grain and oil. It is used in the summer and early fall by tourists in pleasure boats cruising the Great Loop. The Illinois River is an important part of the Great Loop, the circumnavigation of Eastern North America by water.

The City of Peoria is developing a long-term plan to reduce combined sewer overflows to the Illinois River, as required by the U.S. Environmental Protection Agency and the Illinois Environmental Protection Agency. During dry weather, sewage flows safely through the city's sewers to the Greater Peoria Sanitation District wastewater treatment plant. However, about 28 times a year, melting snow or rainwater can overwhelm the sewers, causing untreated sewage to overflow into the Illinois River. Peoria was required to examine the sewer overflows and prepare a long-term control plan to meet Clean Water Act requirements and protect the Illinois River. The city had to submit its plan by December 2008 to U.S. EPA and Illinois EPA.[7][needs update]

The American folk, country, and bluegrass musician John Hartford's song "Long Hot Summer Days", on his 1976 album Mark Twang, is about a man who works on a tugboat on the Illinois River. The chorus of the song includes the lyrics, "For every day I work on the Illinois River / Get a half a day off with pay / Ol' towboat makin' up barges / On a long hot summer day". 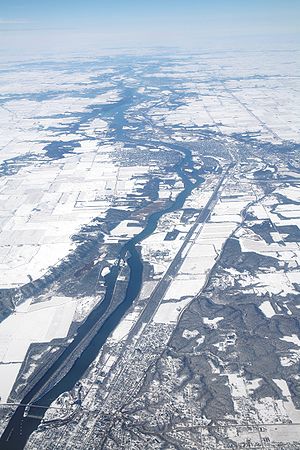