From Infogalactic: the planetary knowledge core
Jump to: navigation, search
For other uses, see Immaculate Heart of Mary (disambiguation).

The Immaculate Heart of Mary is a devotional name used to refer to the interior life of the Blessed Virgin Mary, her joys and sorrows, her virtues and hidden perfections, and, above all, her virginal love for God the Father, her maternal love for her son Jesus, and her compassionate love for all people.[1]

The Eastern Catholic Churches occasionally utilize the image, devotion, and theology associated with the Immaculate Heart of Mary. However, this is a cause of some controversy, some seeing it as a form of liturgical latinisation. The Roman Catholic view is based on Mariology, as exemplified by Pope John Paul II's Apostolic Letter Rosarium Virginis Mariae.[2]

Traditionally, the heart is depicted pierced with seven wounds or swords, in homage to the seven dolors of Mary. Also, roses or another type of flower may be wrapped around the heart.

Veneration of the Heart of Mary is analogous to worship of the Sacred Heart of Jesus. There are, however, differences in this analogy as devotion to the heart of Jesus is especially directed to the "divine heart" as overflowing with love for humanity. In the devotion to Mary, however, the attraction is the love of her heart for Jesus and for God.[1]

In Chapter 2 of St. Luke's gospel, the evangelist twice reports that Mary kept all things in her heart, that there she might ponder over them.[4] Luke 2:35 recounts the prophecy of Simeon that her heart would be pierced with a sword. This image (the pierced heart) is the most popular representation of the Immaculate Heart.[1]

St. Leo said that through faith and love she conceived her son spiritually, even before receiving him into her womb,[4] and St. Augustine tells us that she was more blessed in having borne Christ in her heart than in having conceived him in the flesh. 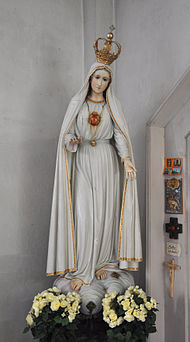 Statue depicting the Immaculate Heart of Mary as described by Sister Lúcia, the famous visionary of Fátima.

Devotion to the Heart of Mary began in the Middle Ages with saints like Anselm of Canterbury, and Bernard of Clairvaux. It was practiced and developed by Mechtild, Gertrude the Great and Bridget of Sweden.[5] Evidence is also discernible in the pious meditations on the Ave Maria and the Salve Regina, usually attributed either to St. Anselm of Lucca (d. 1080) or St. Bernard; and also in the large book "De laudibus B. Mariae Virginis" (Douai, 1625) by Richard de Saint-Laurent, Penitentiary of Rouen in the thirteenth century.

A little earlier it had been included by St. Thomas Becket in the devotion to the joys and sorrows of Mary, by St. Hermann (d.1241) in his devotions to Mary, and somewhat later it appeared in Bridget of Sweden's "Book of Revelations". St. Bernardine of Siena (d.1444), is sometimes called “Doctor of the Heart of Mary”,[5] and it is from him that the Church has borrowed the lessons of the second nocturn for the feast of the Heart of Mary. St. Francis de Sales speaks of the perfections of this heart, the model of love for God, and dedicated to it his "Theotimus."

During this same period one finds occasional mention of devotional practices to the Heart of Mary, e.g., in the "Antidotarium" of Nicolas du Saussay (d. 1488),[6] in Pope Julius II, and in the "Pharetra" of Lanspergius. In the second half of the sixteenth century and the first half of the seventeenth, ascetic authors dwelt upon this devotion at greater length.

It was, however, St. John Eudes (d. 1681) who propagated the devotion, to make it public, and to have a feast celebrated in honor of the Heart of Mary, first at Autun in 1648 and afterwards in a number of French dioceses. He established several religious societies interested in upholding and promoting the devotion, of which his large book on the Coeur Admirable (Admirable Heart), published in 1681, resembles a summary. Jean Eudes' efforts to secure the approval of an office and feast failed at Rome, but, notwithstanding this disappointment, the devotion to the Heart of Mary progressed. In 1699 Father Pinamonti (d. 1703) published in Italian a short work on the Holy Heart of Mary, and in 1725, Joseph de Gallifet combined the cause of the Heart of Mary with that of the Heart of Jesus in order to obtain Rome's approbation of the two devotions and the institution of the two feasts. In 1729, his project was defeated, and in 1765, the two causes were separated, to assure the success of the principal one.

In its principal object this feast is identical with the feast of the "Inner Life of Mary", celebrated by the Sulpicians on 19 October. It commemorates the joys and sorrows of the Mother of God, her virtues and perfections, her love for God and her Divine Son and her compassionate love for mankind.[7]

As early as 1643, St. John Eudes and his followers observed 8 February as the feast of the Heart of Mary.[4] In 1799 Pius VI, then in captivity at Florence, granted the Bishop of Palermo the feast of the Most Pure Heart of Mary for some of the churches in his diocese. In 1805 Pope Pius VII made a new concession, thanks to which the feast was soon widely observed. Such was the existing condition when a twofold movement, started in Paris, gave fresh impetus to the devotion. The two factors of this movement were, first of all, the revelation of the "Miraculous Medal" in 1830, and then the establishment at Notre-Dame-des-Victoires of the Archconfraternity of the Immaculate Heart of Mary, Refuge of Sinners, which spread rapidly. On 21 July 1855, the Congregation of Rites finally approved the Office and Mass of the Most Pure Heart of Mary without, however, imposing them upon the Universal Church.

Pope Pius XII instituted the feast of the Immaculate Heart of Mary in 1944 to be celebrated on 22 August,[8] coinciding with the traditional octave day of the Assumption.[9] In 1969, Pope Paul VI moved the celebration of the Immaculate Heart of Mary to the day, Saturday, immediately after the Solemnity of the Sacred Heart of Jesus. This means in practice that it is now held on the third Saturday after Pentecost.[10]

At the same time as he closely associated the celebrations of the Immaculate Heart of Mary and the Sacred Heart of Jesus, Pope Paul VI moved the celebration of the Queenship of Mary from 31 May to 22 August, bringing it into association with the feast of her Assumption. Those who use the 1962 edition of the Roman Missal or an earlier one (but not more than 17 years before 1962) observe the day established by Pius XII.

It is kept as the patronal feast of the Republic of Ecuador, of the Congregation of the Holy Ghost, of the Society of the Sacred Hearts of Jesus and Mary, and of the Missionary Society of the Heart of Mary.[7]

Main article: Our Lady of Sorrows

Traditional depictions of the IHM show it pierced with seven wounds or swords, in homage to the seven dolors of Mary. The Seven Sorrows of Mary are a popular Roman Catholic devotion. There are devotional prayers which consist of meditation on her Seven Sorrows. One practice is to pray seven Hail Marys daily. The term "Sorrowful and Immaculate Heart of Mary" refers to the combined devotion of both the Immaculate Heart and the Seven Sorrows of Mary as first used by the Franciscan Tertiary Berthe Petit.

Devotion to Mary's Heart has had a greater flowering following the manifestation of the Miraculous Medal to St. Catherine Labouré in 1830.[4] The Immaculate Heart is depicted on the Miraculous Medal,[11] pierced by a sword. The Sacred Heart of Jesus also appears on the medal, next to the Immaculate Heart, crowned with thorns. The M on the medal signifies the Blessed Virgin at the foot of the Cross when Jesus was being crucified.

Our Lady of Fátima asked that, in reparation for sins committed against her Immaculate Heart, on the first Saturday of five consecutive months a Catholic go to Confession (within eight days before or after the first Saturday), receive Holy Communion, recite five decades of the Rosary, and keep her company for 15 minutes while meditating on the 15 mysteries of the Rosary. She promised that, whoever would ever do this, would be given at the hour of his death the graces necessary for salvation.[12]

Alliance with the Sacred Heart

The Alliance of the Hearts of Jesus and Mary is based on the historical, theological and spiritual links in Catholic devotions to the Sacred Heart of Jesus and the Immaculate Heart of Mary.[13][14][15] The joint devotion to the hearts was first formalized in the 17th century by St. John Eudes who organized the scriptural, theological and liturgical sources relating to the devotions and obtained the approbation of the Church, prior to the visions of St. Margaret Mary Alacoque.[16][17][18]

In the 18th and 19th centuries the devotions grew, both jointly and individually through the efforts of figures such as St. Louis de Montfort who promoted Catholic Mariology and St. Catherine Labouré's Miraculous Medal depicting the Heart of Jesus thorn-crowned and the Heart of Mary pierced with a sword.[19][20][21] The devotions, and the associated prayers, continued into the 20th century, e.g., in the Immaculata prayer of St. Maximillian Kolbe and in the reported messages of Our Lady of Fátima which stated that the Heart of Jesus wishes to be honored together with the Heart of Mary.[22][23]

Popes supported the individual and joint devotions to the hearts through the centuries. In the 1956 encyclical Haurietis aquas, Pope Pius XII encouraged the joint devotion to the hearts. In the 1979 encyclical Redemptor hominis, Pope John Paul II explained the theme of unity of Mary's Immaculate Heart with the Sacred Heart.[24] In his Angelus address on 15 September 1985 he coined the term The Alliance of the Hearts of Jesus and Mary, and in 1986 addressed the international conference on that topic held at Fátima, Portugal.[25][26][27][28] 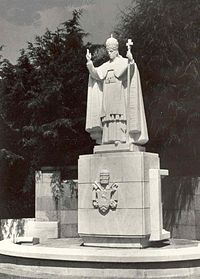 During the third apparition at Fátima, Portugal, on 13 July 1917, the Our Lady allegedly said that to the three little shepherds "God wishes to establish in the world devotion to her Immaculate Heart" in order to save souls from hell and to bring about world peace, and also asked for the consecration of Russia to her Immaculate Heart. Pope Pius XII, in his Apostolic Letter of 7 July 1952 Sacro Vergente, consecrated Russia to the Most Blessed Virgin Mary.

Also, Blessed Alexandrina of Balazar, in Portugal, reported many private apparitions, messages and prophecies received directly from Jesus and the Blessed Virgin Mary. In June 1938, based on the request of her spiritual director Father Mariano Pinho, several bishops from Portugal wrote to Pope Pius XI, asking him to consecrate the world to the Immaculate Heart of Mary. At that time Cardinal Eugenio Pacelli (later Pope Pius XII) was the secretary of the state of the Vatican, and he later performed the consecration of the world.[29]

In August 2013, Pope Francis announced that he would consecrate the world to the Immaculate Heart of Mary on 13 October 2013, as part of the Marian Day celebration that involved the iconic statue of Our Lady of the Rosary of Fátima.[31]