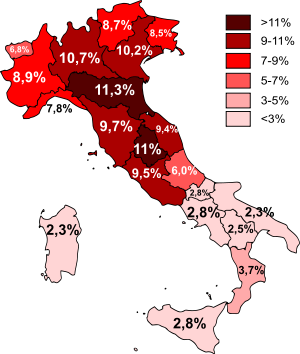 Foreign residents as a percentage of the regional population, 2011

Immigration to Italy occurs from a variety of countries.

As of 1 January 2015, there were 5,014,437 foreign nationals resident in Italy. This amounted to 8.2% of the country's population and represented an increase of 92,352 over the previous year. These figures include 75,067 children born in Italy to foreign nationals (14.9% of total births in Italy), but exclude foreign nationals who have subsequently acquired Italian nationality; this applied to 129,887 people in 2014.[1][2] They also exclude illegal immigrants whose numbers are difficult to determine. In May 2008, The Boston Globe quoted an estimate of 670,000 for this group.[3] The distribution of foreign born population is largely uneven in Italy: 86% of immigrants live in the northern and central parts of the country (the most economically developed areas), while only 14% live in the southern half of the peninsula.[4]

Since the expansion of the European Union, the most recent wave of migration has been from surrounding European states, particularly Eastern Europe, and increasingly Asia,[7] replacing North Africa as the major immigration area. About a million Romanians, around 10% of them being Roma,[8] are officially registered as living in Italy. As of 2013, the foreign born population origin was subdivided as follows: Europe (50.8%), Africa (22.1%), Asia (18.8%), America (8.3%), and Oceania (0.1%).[9] 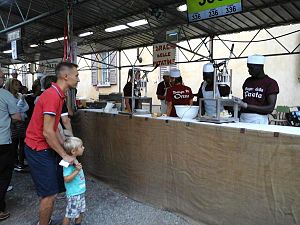 Senegalese workers at the Potato festival in Vimercate (Lombardy) in 2015