Trends of immigration towards Turkey continue to this day, although the motives are more varied and are usually in line with the patterns of global immigration movements — Turkey, for example, receives many economic migrants from nearby countries such as Armenia, the Republic of Moldova, Georgia, Iran, and Azerbaijan, but also from Central Asia.

Historically, the Ottoman Empire—and the Turkish republic succeeding it—were the primary destination for Muslim refugees from areas conquered—or re-conquered—by Christian powers, notably Russia in the Caucasus and Black Sea areas, Austria-Hungary, Greece, Bulgaria, Serbia, Montenegro (later Yugoslavia) and Romania in the Balkans. This has continued to the present day, with large numbers of Bosniak and Chechen refugees entering Turkey as a consequence of wars in Bosnia and Chechnya in the 1990s. Large numbers of Kurds fled north from Iraqi Kurdistan during the First Gulf War in 1991, though nearly all repatriated after the cessation of hostilities and the establishment of the Kurdish Autonomous Region in northern Iraq in the same year.

Nonetheless, the Ottoman Empire was also a popular destination for non-Muslim refugees: the most obvious examples are the Sephardic Jews given refuge mainly in the 16th century with the expulsion of the Jews from Spain and Portugal (as well as before and afterwards), whose descendants form the core of the community of Jews in Turkey today; and the village of Polonezköy in İstanbul.

There are other more curious cases on which more detailed research needs to be done to establish a sound basis. One is the case of Hungarians claimed to have taken refuge in Gebze in early 19th century, and whose descendants might be among the inhabitants of Gebiz municipality depending Serik district in Antalya Province (see Karapinar). 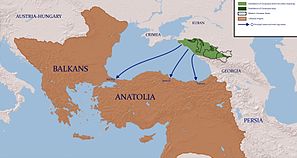 Map of the expulsion of Circassians to the Ottoman Empire

Yet another concerns various claims relating Vendéens, especially of Cholet, who would have been accorded asylum by the sultan Abdülhamid I after the Revolt in the Vendée and settled in various Turkish provinces. On a more ascertainable basis, there were several thousand Cossacks in Turkey for two centuries, near Manyas and Akşehir, until 1962, when they were repatriated to Russia.

According to figures provided by Ankara office of the UN High Commissioner for Refugees, as of 2005 total of 32,832 people are recorded as having made a valid asylum application in Turkey since 1998. As of 2005, 3900 Iranians and 2200 Iraqis, 400 Somalians and 300 Afghans are still in the country, while an additional 1400 Chechens, who are in a "refugee-like situation", are deemed of concern.[1]

These numbers greatly increased in the following years especially in regards to Afghans and Iraqis. As of January 2010, 25,580 refugees and asylum seekers remain in the country. Of these, 5090 Iranians, 8940 Iraqis, 3850 Afghans and 2700 "other" (including Somalians, Uzbeks, Palestinians and others) are still in the country.[4] with the number expected to rise to 8710 Iranians, 9560 Afghans, 7860 other while the Iraqis are expected to decrease to 7890 by December 2011. Notable here is that Afghans are expected to make up the largest refugee population in Turkey in the near future.

UNHCR has four offices in Turkey; namely Ankara, İstanbul, Van and Silopi. The Van office up until 2009 handled all Applicants which enter through the Eastern border, which generally included all Iranians and Afghans who entered illegally.

Immigration during the Republican period 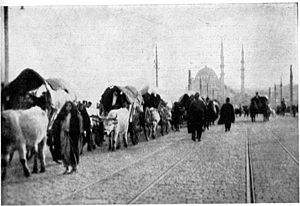 In 1923 more than half a million ethnic Turks arrived from Greece as part of the population exchange between Greece and Turkey. After 1925, Turkey continued to accept Turkic-speaking Muslims as immigrants and did not discourage the emigration of members of non-Turkic minorities. More than 90 percent of all immigrants arrived from the Balkan countries. From 1934 till 1945, 229,870 refugees and immigrants came to Turkey.[5] till Between 1935 and 1940, for example, approximately 124,000 Bulgarians and Romanians of Turkish origin immigrated to Turkey, and between 1954 and 1956 about 35,000 Muslim Slavs immigrated from Yugoslavia. In the fifty-five-year period ending in 1980, Turkey admitted approximately 1.3 million immigrants; 36 percent came from Bulgaria, 25 percent from Greece[citation needed], 22.1 percent from Yugoslavia, and 8.9 percent from Romania. These Balkan immigrants, as well as smaller numbers of Turkic immigrants from Cyprus and the Soviet Union, were granted full citizenship upon their arrival in Turkey. The immigrants were settled primarily in the Marmara and Aegean regions (78 percent) and in Central Anatolia (11.7 percent).

In 1994 the government claimed that as many as 2 million Iranians were living in Turkey, a figure that most international organizations[who?] consider to be grossly exaggerated. Turkey is one of the few countries that Iranians may enter without first obtaining a visa; authorities believe that the relative ease of travel from Iran to Turkey encourages many Iranians to visit Turkey as tourists, or to use Turkey as a way station to obtain visas for the countries of Europe and North America. Consequently, as many as 2 million Iranians actually may transit Turkey—including multiple reentries for many individuals—in a given year. Specialized agencies of the European Union and the United Nations that deal with issues of migrants and refugees believe a more realistic figure of the number of Iranians who live in Turkey, and do not have a residence in Iran or elsewhere, is closer to 50,000. Despite a negative public opinion in Armenia, by 2010, there were between 22,000 and 25,000 Armenian citizens living illegally in Istanbul alone, according to Turkish officials.[6]

Turkey has traditionally been a major transit port for illegal immigrants to enter the European Union, but as Turkey has grown in wealth, it now finds itself a major focal point in illegal immigration. [7][8]

The governments of Turkey and Greece have agreed to work together, to implement border control.[8][9]