From Infogalactic: the planetary knowledge core
Jump to: navigation, search
Not to be confused with Imperial Airlines.

Imperial Airways was the early British commercial long-range air transport company, operating from 1924 to 1939 and serving parts of Europe but principally the British Empire routes to South Africa, India and the Far East, including Malaya and Hong Kong. There were local partnership companies; Qantas (Queensland and Northern Territory Aerial Services Ltd) in Australia and TEAL (Tasman Empire Airways Ltd) in New Zealand.

The establishment of Imperial Airways occurred in the context of facilitating overseas settlement by making travel to and from the colonies quicker, and that flight would also speed up colonial government and trade that was until then dependent upon ships. The launch of the airline followed a burst of air route surveying in the British Empire after the First World War, and after some experimental (and often dangerous) long-distance flying to the margins of Empire.[1] 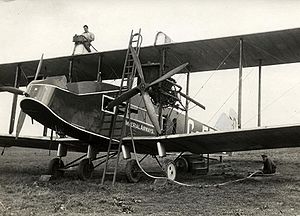 Imperial Airways was created against a background of stiff competition from French and German airlines that enjoyed heavy government subsidies and following the advice of the government's Hambling Committee (formally known as the C.A.T Subsidies Committee).[2] The committee produced a report on 15 February 1923 recommending that four of the largest existing airlines, The Instone Air Line Company, owned by shipping magnate Samuel Instone, Noel Pemberton Billing's British Marine Air Navigation (part of the Supermarine flying-boat company), the Daimler Airway, under the management of George Edward Woods and Handley Page Transport Co Ltd., should be merged.[3] It was hoped that this would create a company which could compete against French and German competition and would be strong enough to develop Britain's external air services while minimizing government subsidies for duplicated services. With this in view, a £1m subsidy over ten years was offered to encourage the merger. Agreement was made between the President of the Air Council and the British, Foreign and Colonial Corporation on 3 December 1923 for the company, under the title of the 'Imperial Air Transport Company' to acquire existing air transport services in the UK. The agreement set out the government subsidies for the new company: £137,000 in the first year diminishing to £32,000 in the tenth year as well as minimum mileages to be achieved and penalties if these weren't met.[4]

The land operations were based at Croydon Airport to the south of London. IAL immediately discontinued its predecessors' service to points north of London, the airline being focused on international and imperial service rather than domestic. Thereafter the only IAL aircraft operating 'North of Watford' were charter flights.

Industrial troubles with the pilots delayed the start of services until 26 April 1924, when a daily London–Paris route was opened with a de Havilland DH.34.[6] Thereafter the task of expanding the routes between England and the Continent began, with Southampton–Guernsey on 1 May 1924, London-Brussels–Cologne on 3 May, London–Amsterdam on 2 June 1924, and a summer service from London–Paris–Basle–Zürich on 17 June 1924. The first new airliner ordered by Imperial Airways, was the Handley Page W8f City of Washington, delivered on 3 November 1924.[7] In the first year of operation the company carried 11,395 passengers and 212,380 letters. In April 1925, the film The Lost World became the first film to be screened for passengers on a scheduled airliner flight when it was shown on the London-Paris route.

Between 16 November 1925 and 13 March 1926 Alan Cobham made an Imperial Airways’ route survey flight from the UK to Cape Town and back in the Armstrong Siddeley Jaguar–powered de Havilland DH.50J floatplane G-EBFO. The outward route was London–Paris–Marseille–Pisa–Taranto–Athens–Sollum–Cairo–Luxor–Assuan–Wadi Halfa–Atbara–Khartoum–Malakal–Mongalla–Jinja–Kisumu–Tabora–Abercorn–Ndola–Broken Hill–Livingstone–Bulawayo–Pretoria–Johannesburg–Kimberley–Blomfontein–Cape Town. On his return Cobham was awarded the Air Force Cross for his services to aviation.

On 30 June 1926 Alan Cobham took off from the River Medway at Rochester in G-EBFO to make an Imperial Airways route survey for a service to Melbourne, arriving on 15 August. He left Melbourne on 29 August and, after completing 28,000 miles in 320 hours flying time over 78 days, he alighted on the Thames at Westminster on 1 October. Cobham was met by the Secretary of State for Air, Sir Samuel Hoare, and was subsequently knighted by HM King George V.

On 27 December 1926 Imperial Airways de Havilland DH.66 Hercules G-EBMX City of Delhi left Croydon for a survey flight to India. The flight reached Karachi on 6 January and Delhi on 8 January. The aircraft was named by Lady Irwin, wife of the Viceroy, on 10 January 1927. The return flight left on 1 February 1927 and arrived at Heliopolis, Cairo on 7 February. The flying time from Croydon to Delhi was 62 hours 27 minutes and Delhi to Heliopolis 32 hours 50 minutes.[8] 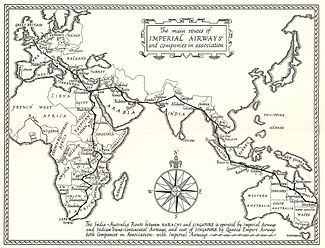 Regular services on the Cairo to Basra route began on 12 January 1927 using DH.66 aircraft, replacing the previous RAF mail flight.[8] Following 2 years of negotiations with the Persian authorities regarding overflight rights, a London to Karachi service started on 30 March 1929, taking 7 days and consisting of a flight from London to Basle, a train to Genoa and a Short S.8 Calcutta flying boats to Alexandria, a train to Cairo and finally a DH.66 flight to Karachi. The route was extended as far as Delhi on 29 December 1929. The route across Europe and the Mediterranean changed many times over the next few years but almost always involved a rail journey.

In April 1931 an experimental London-Australia air mail flight took place; the mail was transferred at the Dutch East Indies, and took 26 days in total to reach Sydney. For the passenger flight leaving London on 1 October 1932, the Eastern route was switched from the Persian to the Arabian side of the Persian Gulf, and Handley Page HP 42 airliners were introduced on the Cairo to Karachi sector. The move saw the establishment of an airport and rest house, Al Mahatta Fort, in the Trucial State of Sharjah now part of the United Arab Emirates.

On 29 May 1933 an England to Australia survey flight took off, operated by Imperial Airways Armstrong Whitworth Atalanta G-ABTL Astraea. Major H G Brackley, Imperial Airways’ Air Superintendent, was in charge of the flight. Astraea flew Croydon-Paris-Lyons-Rome-Brindidsi-Athens-Alexandria-Cairo where it followed the normal route to Karachi then onwards to Jodhpur-Delhi-Calcutta-Akyab-Rangoon-Bangkok-Prachuab-Alor Star-Singapore-Palembang-Batavia-Sourabaya-Bima-Koepang-Bathurst Island-Darwin-Newcastle Waters-Camooweal-Cloncurry-Longreach-Roma-Toowoomba reaching Eagle Farm, Brisbane on 23 June. Sydney was visited on 26 June, Canberra on 28 June and Melbourne on 29 June.

On 28 February 1931 a weekly service began between London and Mwanza on Lake Victoria in Tanganyika as part of the proposed route to Cape Town. On 9 December 1931 the Imperial Airways’ service for Central Africa was extended experimentally to Cape Town for the carriage of Christmas mail. The aircraft used on the last sector, DH66 G-AARY City of Karachi arrived in Cape Town on 21 December 1931. On 20 January 1932 a mail-only route to London to Cape Town was opened. On 27 April this route was opened to passengers and took 10 days. In early 1933 Atalantas replaced the DH.66s on the Kisumu to Cape Town sector of the London to Cape Town route.[9] On 9 February 1936 the trans-Africa route was opened by Imperial Airways between Khartoum and Kano in Nigeria. This route was extended to Lagos on 15 October 1936.

In 1937 with the introduction of Short Empire flying boats built at Short Brothers, Imperial Airways could offer a through-service from Southampton to the Empire. The journey to the Cape was via Marseille, Rome, Brindisi, Athens, Alexandria, Khartoum, Port Bell, Kisumu and onwards by land-based craft to Nairobi, Mbeya and eventually Cape Town. Survey flights were also made across the Atlantic and to New Zealand. By mid-1937 Imperial had completed its thousandth service to the Empire. Starting in 1938 Empire flying boats also flew between Britain and Australia via India and the Middle East.

Imperial's aircraft were small, most seating fewer than twenty passengers; about 50,000 passengers used Imperial Airways in the 1930s. Most passengers on intercontinental routes or on services within and between British colonies were men doing colonial administration, business or research. To begin with only the wealthy could afford to fly, but passenger lists gradually diversified. Travel experiences related to flying low and slow, and were reported enthusiastically in newspapers, magazines and books.[10] There was opportunity for sightseeing from the air and at stops.[11]

Imperial Airways stationed its all-male flight deck crew, cabin crew and ground crew along the length of its routes. Specialist engineers and inspectors – and ground crew on rotation or leave – travelled on the airline without generating any seat revenue. Several air crew lost their lives in accidents. At the end of the 1930s crew numbers approximated 3,000. All crew were expected to be ambassadors for Britain and the British Empire.[10] 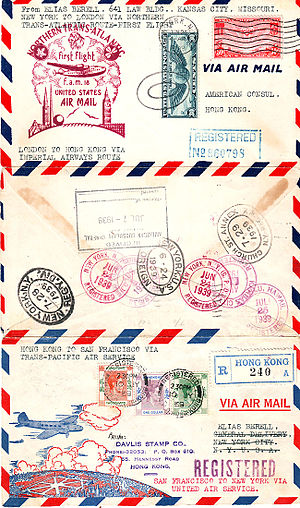 In 1934 the Government began negotiations with Imperial Airways to establish a service (Empire Air Mail Scheme) to carry mail by air on routes served by the airline. Indirectly these negotiations led to the dismissal in 1936 of Sir Christopher Bullock, the Permanent Under-Secretary at the Air Ministry, who was found by a Board of Inquiry to have abused his position in seeking a position on the board of the company while these negotiations were in train. The Government, including the Prime Minister, regretted the decision to dismiss him, later finding that, in fact, no corruption was alleged and sought Bullock's reinstatement which he declined.

The Empire Air Mail Programme started in July 1937, delivering anywhere for 1½ d./oz. By mid-1938 a hundred tons of mail had been delivered to India and a similar amount to Africa. In the same year, construction was started on the Empire Terminal in Victoria, London, designed by A. Lakeman and with a statue by Eric Broadbent, Speed Wings Over the World gracing the portal above the main entrance. From the terminal there were train connections to Imperial's flying boats at Southampton and coaches to its landplane base at Croydon Airport. The terminal operated as recently as 1980.

To help promote use of the Air Mail service, in June and July 1939, Imperial Airways participated with Pan American Airways in providing a special "around the world" service; Imperial carried the souvenir mail from Foynes, Ireland, to Hong Kong, out of the eastbound New York to New York route. Pan American provided service from New York to Foynes (departing 24 June, via the first flight of Northern FAM 18) and Hong Kong to San Francisco (via FAM 14), and United Airlines carried it on the final leg from San Francisco to New York, arriving on 28 July.

Captain H.W.C. Alger was the pilot for the inaugural air mail flight carrying mail from England to Australia for the first time on the Short Empire flyingboat Castor for Imperial Airways' Empires Air Routes, in 1937.

In November 2016, 80 years later, the Crete2Cape Vintage Air Rally will be flying this old route with fifteen vintage aeroplanes - a celebration of the skill and determination of these early aviators.

Imperial Airways operated many types of aircraft from its formation in 1 April 1924 until 1 April 1940 when all aircraft still in service were transferred to BOAC.[32]