The Imperial Fascist League (IFL) was a British Fascist political movement founded by Arnold Leese in 1929 as a breakaway from the British Fascists. The organization included a blackshirted paramilitary arm called the Fascists Legion, which was modeled after the Italian Fascists.

Leese had originally been a member of the British Fascists and indeed had been one of only two members ever to hold elected office for them (as a councillor in Stamford).[1] However he split from the BF around 1927 and decamped to London where in 1929 he established both the IFL and their organ The Fascist.[1] The Fascists Legions, a blackshirted paramilitary arm, was soon added under the command of Leslie H. Sherrard.[2] The group initially advocated such policies as corporatism, monetary reform and the removal of citizenship from Jews.[2] They had no more than 500 members[3] and may have had as few as 150.[4] The group was initially led by Brigadier-General Erskine Tulloch although real power lay with Leese, who was ratified as Director-General in 1932.[5] Henry Hamilton Beamish, head of The Britons, served as vice-president of the IFL and was a regular speaker at the movement's events.[6]

The IFL soon shifted away from Italian fascism (they originally used the fasces as their emblem) after Leese met NSDAP propagandist Julius Streicher in Germany. Soon anti-Semitism became the central theme of IFL policy and their new programme, the 'Racial Fascist Corporate State', stressed the supremacy of the 'Aryan race'.[7] The IFL altered its flag so that it featured the Union Flag superimposed with the swastika.[3] As a result of this conversion the IFL enjoyed a higher profile than its membership might suggest, in large part due to the funding it received from National Socialist Germany paid through the English correspondent of the Völkischer Beobachter Dr. Hans Wilhelm Thost.[3] Indeed, by the mid 1930s the IFL had turned against the Italian model so much that they denounced Benito Mussolini as a "pro-Semite", claiming that the Second Italo-Ethiopian War had been organised by the Jews.[8]

Arrival of the BUF 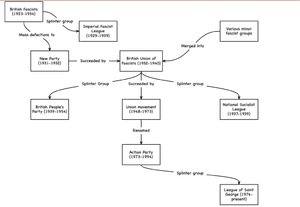 A flowchart showing the history of the early British fascist movement

In 1932 Robert Forgan approached the IFL and suggested that they should merge into Oswald Mosley's British Union of Fascists but the offer was declined.[9] Leese rejected any overtures from Mosley due to the latter's initial reluctance to make anti-Semitism a central theme, leading to Leese dismissing Mosley as a "kosher fascist".[10] He even dubbed the BUF the 'British Jewnion of Fascists' over the issue.[11] One of their biggest differences was that the IFL held a biological view of anti-Semitism that the Jews were inherently inferior as a race in contrast to the BUF, whose eventual adoption of anti-Semitism was framed in ideas about the Jews supposed undue influence at the top echelons of society.[12]

By 1933 the BUF decided to act against the renegade IFL, with Blackshirts attacking a number of meetings culminating in an incident in Great Portland Street where fifty Blackshirts disguised as communists invaded the stage to attack Leese before causing considerable damage to the hall in an attempt to force a large bill onto the IFL.[13] The BUF even passed fabricated evidence of an IFL plot to attack its headquarters to the Home Office.[14] By 1939, with the IFL's influence diminished, their rivalry had cooled to the point where the BUF bookshop in Canterbury even stocked IFL pamphlets.[15]

Although rejecting a merger with the BUF the IFL was linked to the Nordic League through Commander E. H. Cole, a staunch advocate of The Protocols of the Elders of Zion, who served as chancellor of the League as well as being a leading IFL member.[16] Before long both Leese and P. J. Ridout also took out membership of this group, membership of which encompassed most shades of far right activity.[17]

The outbreak of the Second World War caused the small group to fall apart as Leese declared loyalty to King and country and renamed the group the Angles Circle but this stance was rejected by some pro-German members such as Tony Gittens, Harold Lockwood and Bertie Mills.[18] It proved to be academic however as in 1940 Leese was interned under Defence Regulation 18B and although he continued to be politically active after the war the IFL was not reformed.[19] His formation of the National Workers Movement in 1948 meant the final end for the IFL.[20]