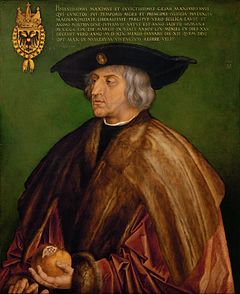 Imperial reform (German: Reichsreform) is the name given to repeated attempts in the 15th and 16th centuries to adapt the structure and the constitutional order (Verfassungsordnung) of the Holy Roman Empire of the German Nation to the requirements of the Early Modern state and to give it a unified government either under the imperial estates (Reichsstände) or under the emperor's supremacy.

From 1434 to 1438, at imperial diets in Eger and Nuremberg, the first attempts at imperial reform were undertaken, partly on the initiative of Emperor Sigismund, partly by the prince-electors. Feuds were banned, and discussions were held on a revision of the rights of coinage and escort (Geleitrecht) and an administrative division of the Empire into imperial circles. All the proposals foundered, however, on the opposing interests of emperor and imperial princes.

In fairness, both parties were striving to create a more workable government of the empire, but each was working in the opposite direction. The emperor was interested in strengthening his central control; the princes by contrast wanted collegiate, corporate leadership that they could participate in. The journals of the time, including publications like the Reformatio Sigismundi, showed that the educated classes that represented the small territorial lordships of the counts and barons (Freiherren) as well as the imperial knights (Reichsritterschaft), but also the imperial cities and the smaller ecclesiastical territories, supported the emperor having a powerful position, because it offered better protection against the demands of their own lords. The emperor himself, however, who from the time of Sigismund's successor, Albert II, almost always came from the House of Habsburg, used imperial politics generally only where it served to support his own personal base of power at home.

In 1495, an attempt was made at an Imperial Diet in the City of Worms to give the disintegrating Holy Roman Empire a new structure, commonly referred to as imperial reform (German: Reichsreform). The fundamental idea of the reform was largely based on the theory of inter-political concordance between the Emperor and the Imperial States developed by Nicholas of Kues.

After the fall of the House of Hohenstaufen in the mid-13th century the power of the emperors gradually declined in favour of the estates (Reichsstände), especially of the Prince-electors assigned by the Golden Bull of 1356. The autonomous Reichsstände had nevertheless become painfully aware of the disadvantages of the absence of a centralised authority on the occasions of threats and armed conflicts like the Hussite Wars.

Maximilian I of Habsburg was elected King of the Romans from 1493, but from 1477 he had to defend his claims to the inheritance of his deceased wife Mary of Burgundy against the intrigues of Louis XI of France, while after the Fall of Constantinople in 1453 the Ottoman Empire had continued to expand into the Balkans. At the 1495 Diet, Maximilian asked the representatives of the estates not only for contributions, but also for an imperial tax to be raised and for troops to be committed. The deputies, led by Chancellor Bertold von Henneberg-Römhild, the Archbishop of Mainz, agreed in principle to a Common Penny (Gemeiner Pfennig) tax paid directly to the Empire, but in return set conditions:

The Swiss Confederacy did not accept the resolutions of the Imperial Diet and explicitly refused to pay the Common Penny, one of the circumstances leading to the Swabian War of 1499 and the Confederacy's exemption from imperial legislation. Due to the obstinate resistance of several States the collection of the tax was finally suspended in 1505.

Whether the Reform can be considered successful depends on how its goals are defined; many scholars[who?] now believe that the Reform was not aimed at producing a modern state (which it did not achieve), but rather attempted to consolidate and redistribute power between the Empire and the States by consensus, an aim in which it did succeed.

The reform was more or less concluded with the Imperial Execution Order of 1555, part of the Peace of Augsburg, which regulated more details of the responsibilities of the Imperial Circle Estates.