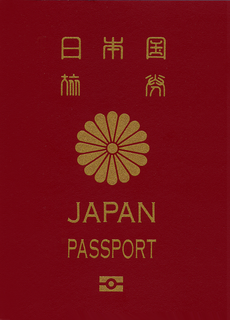 The Imperial Seal inscribed on the front cover of a Japanese passport. 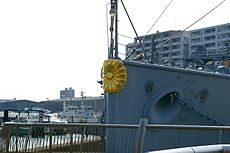 Bow of the battleship Mikasa

The Imperial Seal of Japan, also called the Chrysanthemum Seal (菊紋, kikumon?), Chrysanthemum Flower Seal (菊花紋, 菊花紋章, kikukamon, kikukamonshō?) or Imperial chrysanthemum emblem (菊の御紋, kikunogomon?), is one of the national seals and a crest (mon) used by the Emperor of Japan and members of the Imperial Family. It is a contrast to the Paulownia Seal used by the Japanese government.

During the Meiji period, no one was permitted to use the Imperial Seal except the Emperor of Japan, who used a 16 petal chrysanthemum with sixteen tips of another row of petals showing behind the first row. Therefore, each member of the Imperial family used a slightly modified version of the seal. Shinto shrines either displayed the imperial seal or incorporated elements of the seal into their own emblems.

Earlier in Japanese history, when Emperor Go-Daigo, who tried to break the power of the shogunate in 1333, was exiled, he adopted the seventeen-petal chrysanthemum to differentiate himself from the Northern Court's Emperor Kōgon, who kept the imperial 16-petal mon.[citation needed]