Decoration as worn by gentlemen

The Imperial Service Order was established by King Edward VII in August 1902. It was awarded on retirement to the administration and clerical staff of the Civil Service throughout the British Empire for long and meritorious service.[1] Normally a person must have served for 25 years to become eligible, but this might be shortened to 16 years for those serving in unsanitary locations. There was one class: Companion. Both men and women were eligible, and recipients of this order are entitled to use the post-nominal letters 'ISO'.[2][3] 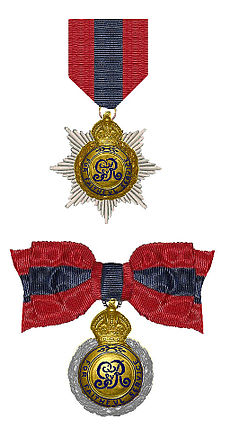 ISO as worn by gentlemen (above) and ladies (below)

The insignia of the order for men was an eight-pointed silver star, with the top ray obscured by a crown; the golden central medallion bore the cipher of the reigning monarch surrounded by the legend 'For Faithful Service'. This was suspended on a ribbon of crimson with a blue central stripe.

The insignia of the order for women had the same medallion as for men, surrounded by a silver laurel wreath and topped by a crown. This was suspended on a bow of crimson with a blue central stripe.

Civil servants who complete 25 years service are eligible for the Imperial Service Medal (ISM) upon retirement. The medal is a silver circular medal bearing the effigy of the reigning monarch on the obverse, and the motif of a man resting after work with the legend 'For Faithful Service' on the reverse. The ribbon or bow pattern is the same as the Imperial Service Order.

During the 1993 reform of the British honours system the British Government decided to make no new appointments to the Imperial Service Order; the Imperial Service Medal, however, continues to be awarded in recognition of certain individuals who make positive contributions.[4] In recent years, only the government of Papua New Guinea continues to nominate candidates for both the Order and the Medal.