From Infogalactic: the planetary knowledge core
Jump to: navigation, search
This article is about the constituents of the Holy Roman Empire. For the use of "imperial state" as a synonym for "empire", see Empire.
For the Imperial State of Iran, see Pahlavi dynasty. 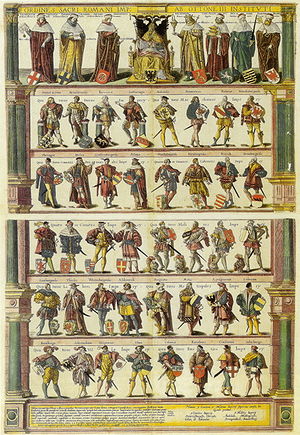 An Imperial State or Imperial Estate (Latin: Status Imperii ; German: Reichsstand, plural: Reichsstände) was a part of the Holy Roman Empire with representation and the right to vote in the Imperial Diet (Reichstag). Rulers of these States were able to exercise significant rights and privileges and were "immediate", meaning that the only authority above them was the Holy Roman Emperor. They were thus able to rule their territories with a considerable degree of autonomy.

Imperial States could be either ecclesiastic or secular. The ecclesiastical states were led by:

The secular estates, most notably:

Until 1582 the votes of the Free and Imperial Cities were only advisory. None of the rulers below the Holy Roman Emperor ranked as kings, with the exception of the Kings of Bohemia.

The status of estate was normally attached to a particular territory within the Empire, but there were some reichsständische Personalisten, or Imperial Stately Personalists. Originally, the Emperor alone could grant that status, but in 1653, several restrictions on the Emperor's power were introduced. The creation of a new estate required the assent of the College of Electors and of the College of Princes (see Reichstag below). The ruler was required to agree to accept imperial taxation and military obligations. Furthermore, the state was required to obtain admittance into one of the Imperial Circles. Theoretically, personalist states were forbidden after 1653, but exceptions were often made.

Once a territory attained the status of an estate, it could lose that status under very few circumstances. A territory ceded to a foreign power ceased to be an estate; furthermore, a mediatized state (that is, a state that came to be under the authority but not the sovereignty of a foreign power) could cease to be an estate. From 1648 onwards, inheritance of the state was limited to one family; a territory inherited by a different family ceased to be a state unless the Emperor explicitly allowed otherwise. Finally, a territory could cease to be an imperial estate by being subjected to the Imperial ban (the most notable example involved the Elector Palatine Frederick V, who was banned in 1621 for his participation in the Bohemian Revolt).

Imperial States enjoyed several rights and privileges. Rulers had autonomy inasmuch as their families were concerned; in particular, they were permitted to make rules regarding the inheritance of their states without imperial interference. They were permitted to make treaties and enter into alliances with other Imperial States as well as with foreign nations. The electors, but not the other rulers, were permitted to exercise certain regalian powers, including the power to mint money, the power to collect tolls and a monopoly over gold and silver mines.

Votes were held in right of the states, rather than personally. Consequently, an individual ruling several states held multiple votes; similarly, multiple individuals ruling parts of the same state shared a single vote. These rules were not formalized until 1582; prior to this time, when multiple individuals inherited parts of the same state, they sometimes received a vote each. Votes were either individual or collective. Princes and senior clerics generally held individual votes (but such votes, as noted above, were sometimes shared). Prelates (abbots and priors) without individual votes were classified into two benches—the Bench of the Rhine and the Bench of Swabia—each of which enjoyed a collective vote. Similarly, Counts and Lords were grouped into four comital benches with a collective vote each—the Upper Rhenish Bench of Wetterau, the Swabian Bench, the Franconian Bench and the Westphalian Bench.