Improvised vehicle armour is vehicle armour added in the field that was not originally part of the design, in any sort of official up-armor kit, or centrally planned.

Improvised vehicle armour has appeared on the battlefield for as long as there have been armoured vehicles in existence. In World War II, U.S. tank crews welded spare strips of tank track to the hulls of their Sherman, Grant, and Stuart tanks.[1] In the Vietnam War, U.S. "gun trucks" were reinforced with sandbags and locally fabricated steel armour plate.[2]

More recently, U.S. troops in Iraq have armoured their Humvees and various military transport vehicles with scrap materials: this came to be known as "hillbilly armor" by the Americans,[3] or sometimes "hajji armour" when installed by Iraqi contractors.[1]

In effect the first armoured cars to see combat were entirely improvised although this soon changed as the war continued. A few were used by the Belgian army during the German invasion.[4] The British Royal Naval Air Service received reports of this and converted some of their own cars.[4] Improvised conversion continued until December 1914 when the first standardized design entered service. [4]

Most armies involved in the conflict adopted some form of improvised armour at some point. The Home Guard in the United Kingdom equipped itself with a number of vehicles with improvised armour. Later in 1944 some Churchill tanks had sections of track attached to their existing armour to provide extra protection.[5] M8 Greyhound crews would sometimes line the floors of their vehicles with sandbags to provide extra protection against landmines.[6] U.S. tanks sometimes had spare strips of track welded to the hulls. This was done with the Sherman, Grant, and Stuart tanks.[1] This was not official policy and tank crews were often warned by their commanders of over-loading their tanks with too many sand-bags, as this obviously increased the total weight of the vehicles. 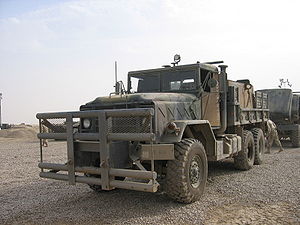 A U.S. Army 5-ton cargo truck with improvised armour on the doors, rear gunner's box, and an improved bumper.

When American troops first took Baghdad, only the U.S. military police had fully armoured vehicles.[8] During the occupation that followed the 2003 invasion that toppled Saddam Hussein's regime, insurgent forces deployed roadside bombs, RPG teams, and snipers with small arms to attack military vehicles on supply convoys and other known routes.

To protect themselves from these threats, American troops began reinforcing their Humvees, LMTVs and other vehicles with whatever was available, including scrap metal, kevlar blankets and vests, compromised ballistic glass and plywood. In some cases they relied on Iraqis to assist them in these efforts, and referred to the result as "Hajji" armour.[1] They were also officially advised[9] to line the floors of their Humvees with sandbags to deaden the impact of land mine explosions.

Some officers in Iraq were disciplined over their refusal to carry out missions in what they considered improperly armoured vehicles.[10]

Hungarian troops were said to be covering their non-armored Mercedes-Benz G-Class vehicles with ballistic vests on the outside. 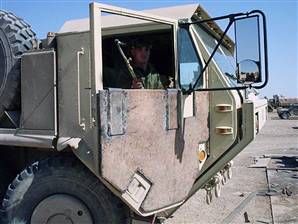 A reinforced door on an Army truck at a base at Ar-Ramadi, Iraq.

The Army began deploying 'up-armour' kits to better protect military vehicles in August 2003, two years before the Marine Corps would. Three levels of 'up-armour' were implemented:

The process of up-armouring all vehicles was to be complete by mid-2005.[11]

As recently as February 2006, the Army was welding additional armour onto the armoured Humvee variant M1114 and 5-ton MTV in Iraq.[12]

The United States Marines developed their own Marine Armour Kit (MAK), consisting of bolt-on armour for the crew compartment, ballistic glass, suspension upgrades, and air conditioning. However, the kit was not fielded until early 2005, and even then only to certain specified units.[13] The armour was made available for MTVRs, LVSs and HMMWVs. Level I armour kits are now phasing out MAKs for MTVRs and M1114 HMMWVs. 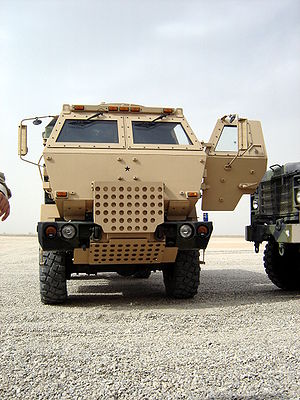 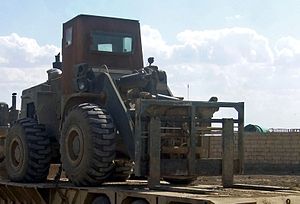 A 10K forklift outfitted with hillbilly armour protecting its cab 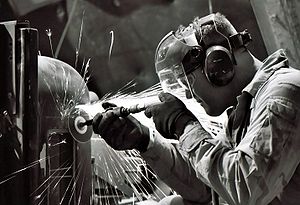 An Airman works on a truck as part of an expanded program to improve the armoured protection for U.S. troops. Balad Air Base, Iraq (April 2005).

The practice of U.S. troops reinforcing their vehicles with improvised armour became well known after a U.S. soldier questioned U.S. Secretary of Defense Donald Rumsfeld about the need to salvage armour from scrap materials on December 8, 2004 at Camp Buehring, Kuwait.[14][15] The question was met with cheers from fellow troops.[16]

Wilson: "Why do we soldiers have to dig through local landfills for pieces of scrap metal and compromised ballistic glass to up-armor our vehicles? And why don't we have those resources readily available to us?"

Rumsfeld was paying a visit to approximately 2,300 troops on the eve of their deployment across the border to Iraq. Specialist Thomas Wilson of the 278th Regimental Combat Team (Tennessee Army National Guard) asked the question, but it was later revealed that Lee Pitts, an embedded reporter for the Chattanooga Times Free Press, had asked Wilson to make the inquiry.[17][18][19]

Several related questions were asked of Rumsfeld by other troops. Some of Wilson's fellow soldiers and commanders supported his inquiry in later interviews. Col. John Zimmermann, Staff Judge Advocate of Wilson's unit said that 95 percent of the unit's 300 vehicles lacked appropriate armour, and suggested that it was the result of a double standard used to equip the National Guard as compared with active-duty forces.[20][21]

On December 9, 2004, President George W. Bush responded to the incident, saying that the expressed concerns were being addressed.[9]

On December 10, 2004, it was reported that following the incident, Armor Holdings, Inc., the company producing armoured Humvees for the Army, was asked to increase production from 450 to 550 per month—its maximum capacity.[8] Also on December 10, Congressman Marty Meehan (D-MA, House Armed Services Committee) issued a news release harshly critical of the Bush administration and The Pentagon: Meehan described the shortage of armoured vehicles as "a dangerously exposed center of gravity" of America's military presence in Iraq, and the lack of preparedness for insurgent tactics such as deploying improvised explosive devices (IEDs) as "symptomatic of a headlong rush to war."[22]

On December 15, 2004, the Department of Defense held a special briefing on the issue of up-armouring. Officials stated that the process of up-armouring SPC Wilson's unit was nearly complete on December 8, and was completed within 24 hours of the incident. Brig. Gen. Jeff Sorenson, Deputy for Acquisition Systems Management, stated during the briefing that fully armoured vehicles had been isolated and destroyed in the former Soviet Union's campaigns in Afghanistan and Chechnya, and that the hearts and minds aspect of the Army's counterinsurgency efforts would be negatively impacted were soldiers to remain isolated from the populace in fully armoured vehicles.[11]

The incident sparked criticism of Rumsfeld,[23] and led some to question the nation's commitment to its troops.[24]

During the 2011 Libyan civil war, anti-Gaddafi forces were seen operating T-55 tanks and technicals with improvised armour mounted on them, likely in an attempt to improve survivability against superior Libyan Army hardware such as T-72 tanks.

During the War in Donbass, units on both sides of the conflict have improvised armor added to vehicles like the BTR-80.[25][26] The Azov Battalion has developed their own vehicle, the Azovets, similar to the Russian BMPT Terminator.[27][28]

In their role in the ongoing Syrian Kurdish–Islamist conflict and Syrian Civil War and finding themselves lacking in the amount of modern armor, members of the Kurdistan peshmerga and People's Protection Units (YPG) were reported to have fabricated homemade armored fighting vehicles of widely varying designs to fight ISIS militants, who are armed with captured modern armor. Many of the improvised vehicles were converted tractors and farm equipment fitted with Soviet-era guns, some with elaborate paint schemes and designs. Western commentators and reporters have likened the appearance of some of these vehicles as like the make-shift vehicles featured in the Mad Max post-apocalyptic action multi-media franchise.[29][30] The allied Free Syrian Army rebels have also been reported to have fashioned similar makeshift armored fighting vehicles.[31]

During the 1984 UK miners' strike, buses used for transporting strikebreakers to work were armoured against attacks by strikers by fitting metal bars to their windows. These improvised armoured buses were nicknamed "battle buses".

In recent years, some storm chasers in the United States have developed purpose-made Tornado Intercept Vehicles designed to survive the hostile environment inside a tornado. These vehicles are built on truck and SUV chassis with heavy armour shells built onto them consisting of steel, kevlar, polycarbonate, and Rhino Linings to protect against airborne debris.

Drug gangs involved in the Mexican Drug War have in a number of cases fitted improvised armour to heavy trucks.[32]