Kriss Donald (2 July 1988 – 15 March 2004) was a Scottish 15-year-old white male who was kidnapped, tortured,[2] and murdered by burning in Glasgow in 2004 by a gang of Muslim men of Pakistani origin, some of whom fled to Pakistan after the crime.[3][4][5][6] Daanish Zahid, Imran Shahid, Zeeshan Shahid, and Mohammed Faisal Mustaq were later found guilty of racially motivated murder and sentenced to life imprisonment.[3][4] A fifth participant in the crime was convicted of racially motivated violence and jailed for five years.

The case is cited as a prominent example of race censorship in the United Kingdom. The BBC did report the murder, but opted not to cover the details of the case for political reasons, in an alleged case of anti-white media bias.[7] The British mainstream media also did not detail how Donald was killed,[8] and police records remain sealed. This is said to be similar to restrictions on reporting Muslim men's sex grooming gangs in the UK, or black on white violence in the USA and elsewhere in the West. Instead, the media, with the strong support of former Prime Ministers such as Theresa May, have long chosen to memorialize the earlier murder of Stephen Lawrence, where a black man was stabbed to death by white youths, even though Lawrence's death was much quicker than Donald's.[9] Numerous memorials were held for Lawrence's death only.

The reticence of the politically-socialist establishment press in relaying details of the slaying is symbolic of a larger trend of progressive support for Islamization, population replacement, and even white genocide in the UK.[10][11][12][13]

On 15 March 2004, Donald was abducted from Kenmure Street by five men associated with a local Pakistani gang led by Imran Shahid. The kidnapping was ostensibly revenge for an attack on Shahid at a nightclub in Glasgow city centre the night before by a local white gang, and Donald was chosen as an example of a "white boy from the McCulloch Street area" despite having no involvement in the nightclub attack or in any gang activity.[14] He endured several hours of various types of unidentified stabbings and lacerations in the back of a car and at an empty industrial site, where he died after being burned. The details of what happened in his final hours have been highly redacted by the UK authorities, in a case said to resemble the media blackout surrounding the Bataclan massacre in Paris, also carried out by Muslim men.

Authorities became worried when the killing was "politicised" because of the racial and Muslim elements. After the murder there were increased ‘racial tensions’ in the area sufficient to lead to police intervention against various white grassroots protesters.[4]

Initially, two men were arrested in connection with the crime. One man, Daanish Zahid, was found guilty of Kriss Donald's murder on 18 November 2004 and is the first person to be convicted of racially motivated murder in Scotland.[15] Another man, Zahid Mohammed, admitted involvement in the abduction of Donald and lying to police during their investigation and was jailed for five years. He was released after serving half of his sentence and returned to court to give evidence against three subsequent defendants.

Three suspects were arrested in Pakistan in July 2005 and extradited to the UK in October 2005, following the intervention of Mohammed Sarwar, the MP for Glasgow Central.

The Pakistani police had to engage in a "long struggle" to capture two of the escapees. There is no extradition treaty between Pakistan and Britain, but the Pakistani authorities agreed to extradite the suspects.[14] There were numerous diplomatic complications around the case, including apparent divergences between government activities and those of ambassadorial officials; government figures were at times alleged to be reluctant to pursue the case for diplomatic reasons.[19]

The three extradited suspects, Imran Shahid, Zeeshan Shahid, and Mohammed Faisal Mushtaq, all in their late twenties, arrived in Scotland on 5 October 2005.[20] They were charged with Donald's murder the following day.[21] Their trial opened on 2 October 2006 in Scotland.[22]

On 8 November 2006, the three men were found guilty of the racially motivated murder of Kriss Donald. All three had denied the charge; however, a jury at the High Court in Edinburgh convicted them of abduction and murder.[17] The judge at the trial, Lord Uist, made a statement summing up the case:

Each of the killers received sentences of life imprisonment, with Imran Shahid given a 25-year minimum term, Zeeshan Shahid a 23-year minimum and Mushtaq receiving a recommended minimum of 22 years.

The BBC has been criticised by some viewers because the case featured on national news only three times and the first trial was later largely confined to regional Scottish bulletins including the verdict itself. Although admitting that the BBC had "got it wrong", the organisation's Head of Newsgathering, Fran Unsworth, largely rejected the suggestion that Donald's race played a part in the lack of reportage, instead claiming it was mostly a product of "Scottish blindness". In preference to reporting the verdict the organisation found the time to report the opening of a new arts centre in Gateshead in its running order.[23] The BBC again faced criticisms for its failure to cover the second trial in its main bulletins, waiting until day 18 to mention the issue and Peter Horrocks of the BBC apologised for the organisation's further failings.[24]

However, Peter Fahy, spokesman of race issues for the Association of Chief Police Officers, noted that the media as a whole tended to under-report the racist murders of white people, stating "it was a fact that it was harder to get the media interested where murder victims were young white men".[25] 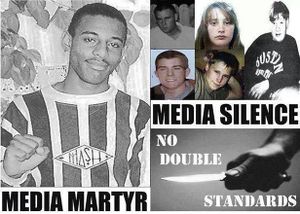 A poster by the Scottish British National Party that accused the British government of double standards regarding race and crime.

The British National Party were quickly condemned by Scotland's First Minister and Labour Party MSP Jack McConnell, among other left-wing activists, of seeking to "exploit the case for political advantage", and an open letter signed by MSPs, trades unionists, and "community leaders", protested the BNP's plans to stage a visit to Pollokshields. The group did hold a rally in the area, leading to further media accusations that it was "fuelling racial tension".[26]

A March 2004 article in The Scotsman newspaper alleged a lack of response by authorities to concerns of rising racial tensions and that Strathclyde Police had felt pressured to abandon Operation Gather, an investigation into Asian gangs in the area, for fear of offending ethnic minorities.[27] In a January 2005 interview with a Scottish newspaper, prominent Pakistani Glaswegian Bashir Maan claimed that "fear and intimidation" had allowed problems with Asian gangs in some parts of the city to go unchecked. The article also quoted a former senior Strathclyde police officer who criticised "a culture of political correctness" which had allowed gang crime to "grow unfettered".[28]

A BBC report claims that another reason for inaction was lack of evidence, as locals were prepared to make complaints but were afraid to give evidence in court.[14] Left-wing commentators have argued the murder was somewhat "mischaracterised" in the media, as well as expressing doubts that significant ethnic tensions exist in Pollokshields, while attempting to justify the killing as a form of "gangland revenge".[29]

The case drew attention to the issues of prisoners automatically being released from prison early when it emerged that one of the murderers, Shahid, was on early release from a prison sentence at the time of the killing. He had previously been jailed for two and half years for a road rage attack but only served nine months of his sentence.[30]

Glasgow band Glasvegas wrote the song "Flowers And Football Tops" having been inspired by the tragedy and the likely impact it would have on the victim's parents. The band dedicated their 2008 Philip Hall Radar NME award win to Donald's memory.[31][32][33]

A memorial plaque was installed on a bench by the River Clyde in memory of Donald.[34]

One of the most notable impacts of the murder was to force some people to examine their views of racism and its victims. Commentators such as Mark Easton cite the racist murders of Donald and also Ross Parker as demonstrating how society has been forced to redefine racism and discard the erroneous definition of "prejudice plus power" – a definition which only allowed ethnic minorities to be victims of hate crime.[13] Even the extreme far-left and pro-establishment journalist Yasmin Alibhai-Brown also cited the Donald case when highlighting the lack of concern for white victims of racist murders. She drew comparisons with high profile ethnic minority victims, asking whether Donald's murderers were "less evil than those who killed Stephen Lawrence". Alibhai-Brown came to the conclusion that treating "some victims as more worthy of condemnation than others is unforgivable – and a betrayal of anti-racism itself".[11]