From Infogalactic: the planetary knowledge core
Jump to: navigation, search
The native form of this personal name is Thököly Imre. This article uses the Western name order. 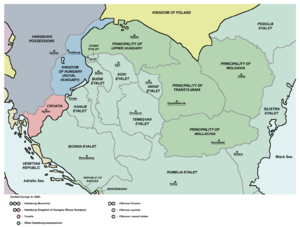 Imre Thököly was born at Késmárk, Royal Hungary (today Kežmarok in Slovakia) in September 1657. Thököly lost both parents while still a child. He studied at the Lutheran college in Eperjes (today Prešov, Slovakia) at a time when anti-Habsburg rebels and Protestants were constantly in arms against the imperial troops in Upper Hungary (present day Eastern Slovakia).

In December 1670, when his father István Thököly, a participant of the anti-Habsburg Wesselényi conspiracy, was killed by imperial troops when protecting his Árva castle (Slovak: Orava, now in northern Slovakia), he fled from the castle to Transylvania, where he took refuge with his kinsman Mihály Teleki, the chief minister of Michael Apafi, prince of Transylvania. Here Thököly came into contact with refugees from Royal Hungary, who had great hopes of the high-born, highly gifted youth who was also a fellow sufferer, a large portion of his immense estates having been confiscated by the Emperor. The discontent reached its height when the Emperor Leopold I, Holy Roman Emperor (27 February 1673) suspended the Hungarian constitution, appointed Johan Caspar Ampringen dictator, deprived 450 Protestant clergy of their living and condemned 67 more to the galleys.

Encouraged by promises of help from Louis XIV of France, the anti-Habsburg rebels now rose "pro libertate et justitia", and chose the youthful Thököly as their leader. The war began in 1678. Eastern Hungarian Kingdom and the central Hungarian mining towns were soon in Thököly's possession. In 1681, reinforced by 10,000 Transylvanians and a Turkish army under the Pasha of Nagyvárad (today Oradea, Romania), he compelled the Emperor to grant an armistice. In June 1682 he married the Croatian countess Jelena Zrinska (in Hungarian: Zrínyi Ilona), the widow of Prince Francis I Rákóczi.

Thököly's distrust of the Emperor now induced him to turn for help to Sultan Mehmed IV, who recognized him as King of Upper Hungary (Turkish: Muin-i Ali Osman'a itaat üzereyim emre, Kral-ı Orta Macar'ım ki namım Tökeli İmre) – partly coinciding with present-day Slovakia – on condition that he paid an annual tribute of 40,000 tallers. In the course of the same year Thököly captured fortress after fortress from the Emperor and extended his dominions to the Vág (Slovak: Váh) river. At the two Diets held by him, at Kassa (today Košice, Slovakia) and Tállya, in 1683, the estates, though not uninfluenced by his personal charm, showed some want of confidence in him, fearing lest he might sacrifice the national independence to the Turkish alliance. They refused therefore to grant him either subsidies or a levy en masse, and he had to take what he wanted by force.

Alliance with the Ottoman Empire

Thököly materially assisted the Turks in the Battle of Vienna in 1683, and shared the fate of the gigantic Turkish army. The Turkish Grand Vizier nevertheless laid the blame of the Turkish defeat in Vienna on Thököly, who thereupon hastened to Edirne to defend himself before the Turkish Sultan. Shortly afterwards, perceiving that the Turkish cause was now lost, he sought the mediation of the Polish king John III Sobieski to reconcile him with the Emperor, offering to lay down his arms if the Emperor would confirm the religious rights of the Protestants in Hungary and grant him, Thököly, Upper Hungary (more exactly: 13 north-eastern counties of Royal Hungary) with the title of prince. Leopold refused these terms and demanded an unconditional surrender. Thököly then renewed the war. But the campaign of 1685 was a series of disasters, he was defeated at Prešov (Eperjes) and when he sought help from the Turks at Nagyvárad they seized and sent him in chains to Edirne (possibly because of his previous negotiations with Leopold), whereupon most of his followers made their peace with the Emperor.

In 1686 Thököly was released from his dungeon and sent with a small army into Transylvania, but both this expedition and a similar one in 1688 ended in failure. The Turks then again grew suspicious of him and imprisoned him a second time. In 1690, however, the Turks dispatched him into Transylvania a third time with 16,000 men, and in September he routed the united forces of General Donat Heissler and Count Mihály Teleki at Zărneşti. After this great victory, Thököly was elected prince of Transylvania by the Kereszténysziget (probably Oprişani now) Diet, but could not maintain his position for long against the imperial armies. In 1691 he quit Transylvania altogether. He led the Turkish cavalry at the Battle of Slankamen, and served valiantly but vainly against Austria during the remainder of the war, especially distinguishing himself at the Battle of Zenta (1697).

He was excluded by name from the amnesty promised to the Hungarian rebels by the Treaty of Karlowitz (26 January 1699). After one more unsuccessful attempt, in 1700, to recover the principality, he settled down at Galata with his wife. From Sultan Mustafa II he received large estates and the title of count of Widdin.

He died in 1705 in İzmit. He is buried in Kežmarok in the mausoleum of the so-called new church.

His statue is part of Heroes' Square in Budapest, a UNESCO World Heritage Site.