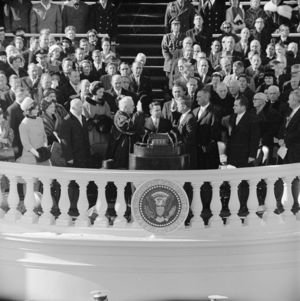 An inauguration is a formal ceremony to mark the beginning of a major public leader's term of office. The "inaugural address" is a speech given during this ceremony which informs the people of his/her intentions as a leader. A famous inauguration speech is John F. Kennedy's.

Other than personal inaugurations, the term can also refer to the official opening or beginning of an institution or structure, for example the inauguration of a new Canada–United States border crossing.

The historical source of the word “inauguration” stems from the Latin augur, which refers to the rituals of ancient Roman priests seeking to interpret if it was the will of the gods for a public official to be deemed worthy to assume office. An inauguration site is a ceremonial site that is for someone of a public figure.