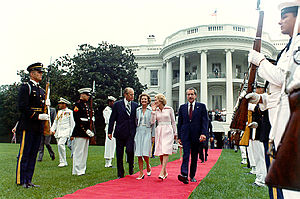 The Fords escort the Nixons across the South Lawn of the White House to Army One before Gerald Ford takes the oath of office, August 9, 1974 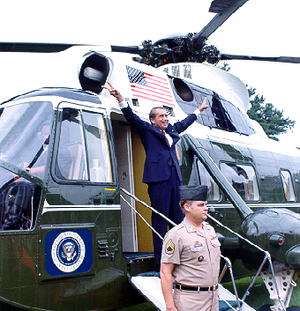 In a televised Oval Office speech on August 8, 1974, Richard Nixon announced to the nation that he would resign the Presidency of the United States "effective at noon tomorrow [August 9]."[4] At 9:00 am on August 9, Nixon gave a farewell talk to an East Room assembly of White House staff and selected dignitaries, including the Cabinet and Vice President Ford. It was an emotional event, with President Nixon nearly breaking down a number of times. When it was finished, Vice President Ford escorted the President and First Lady to an Army helicopter, where the President waved his famous "v-sign" before flying off to Air Force One and a flight to "exile" in California. The nuclear codes were left in the care of the Vice President.

Nixon's resignation was tendered to United States Secretary of State Henry Kissinger at 11:35 am. At that moment, Ford became the 38th President of the United States, although he took the official oath of office at 12:05 pm. Once the former President (and now private citizen) Nixon left the building, the White House staff began preparations for Ford's swearing in. More chairs were added for the much larger crowd of invited guests than was at the farewell. The oath was administered to Ford by Chief Justice Warren Burger in the White House East Room. Chief Justice Burger was traveling in the Netherlands at the time, and was flown back to Washington on an Air Force plane.[5] The first phone call that President Ford, a former center on the University of Michigan football team, made after his inauguration was on Saturday, August 10, 1974, to Ohio State University football coach Woody Hayes, who had just recently suffered a heart attack.[6]

Ford gave a speech immediately after taking the Presidential oath, alluding in his remarks to the unique and "extraordinary circumstances" that led to his ascension to the Presidency:

I am acutely aware that you have not elected me as your President by your ballots, and so I ask you to confirm me as your President with your prayers. And I hope that such prayers will also be the first of many... If you have not chosen me by secret ballot, neither have I gained office by any secret promises. I have not campaigned either for the Presidency or the Vice Presidency. I have not subscribed to any partisan platform. I am indebted to no man, and only to one woman—my dear wife, Betty—as I begin this very difficult job... My fellow Americans, our long national nightmare is over... Our Constitution works; our great Republic is a government of laws and not of men. Here the people rule. But there is a higher Power, by whatever name we honor Him, who ordains not only righteousness but love, not only justice but mercy.

Immediately after the 850 word address was over, Ford introduced his new press secretary, Jerald terHorst to the press corps, and met with the Cabinet. Ford asked Henry Kissinger to stay on as Secretary of State in the new Administration.[5] Later that day, Ford met with ambassadors of the NATO nations.

The 20 May 2015 series finale of the Late Show with David Letterman, which had 13.7 million viewers and marked Letterman's retirement from television after thirty-three years, was introduced by archival footage of President Gerald Ford and pre-recorded cameos of former Presidents George H. W. Bush, Bill Clinton, George W. Bush, and incumbent Barack Obama all saying, "our long national nightmare is over."[8][9]