The inauguration of William Howard Taft as the 27th President of the United States and James S. Sherman as Vice President took place on Thursday, March 4, 1909. 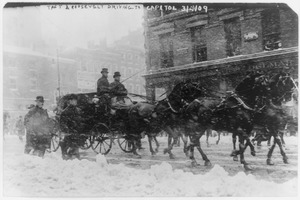 Taft and Roosevelt driving to Capitol 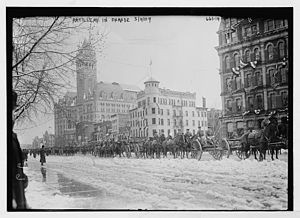 Due to a blizzard the night before that brought 10 inch snow fall to Washington D.C., the inauguration ceremony was moved indoors into the United States Senate Chamber in the United States Capitol. The oath of office was administered by Chief Justice Melville Fuller, who was doing this for the sixth and final time. The new President took his oath on the century-old Bible belonging to the Supreme Court, which he used again in 1921 to take his oaths as the Chief Justice of the Supreme Court.[1] Despite the adverse weather conditions the inaugural parade was not cancelled. 6,000 city workers used 500 wagons to remove 58,000 tons of snow to clean the parade route.[2] For the first time in inauguration history, the First Lady Helen Herron Taft joined her husband into leading the parade from the Capitol to the White House.

An inaugural ball that evening was held at the Pension Building.[3] It was the last official inaugural ball until 1949 as the next President Woodrow Wilson asked the city of Washington not to hold it; tradition of inaugural balls was revived in 1949 by President Harry Truman.[4]