Garcilaso de la Vega (12 April 1539 – 23 April 1616), born Gómez Suárez de Figueroa and known as El Inca or Inca Garcilaso de la Vega, was a chronicler and writer born in the Spanish Viceroyalty of Peru.[1] Sailing to Spain at 21, he was educated informally there, where he lived and worked the rest of his life. The son of a Spanish conquistador and an Inca noblewoman born in the early years of the conquest, De la Vega is recognized primarily for his histories about Inca history, culture, and society. His work was influential, well-received, and particularly notable as the first literature by an author born in the Americas to enter the western canon.

After his father's death in 1559, De la Vega moved to Spain in 1561, seeking official acknowledgement as his father's son. His paternal uncle became a protector, and De la Vega lived in Spain for the rest of his life. This was where he wrote his histories of the Inca culture and Spanish conquest, as well as an account of Hernando de Soto's expedition in Florida. 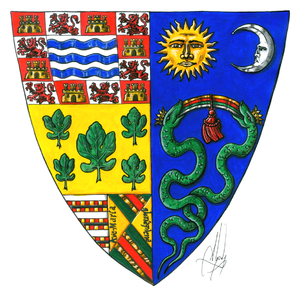 The coat of arms of Garcilaso de la Vega.

Born Gómez Suárez de Figueroa, in Cusco, Peru, in 1539, he was the illegitimate son of a Spanish aristocrat and a royal Inca mother.[2] He was born during the early years of the Spanish conquest. His father was Spanish captain and conquistador Sebastián Garcilaso de la Vega y Vargas (d. 1559).[2] His mother was an Inca princess, Palla Chimpu Ocllo, who was baptized after the fall of Cuzco as Isabel Suárez Chimpu Ocllo. She was descended from Inca nobility, a daughter of Túpac Huallpa and a granddaughter (not a niece) of the powerful Inca Tupac Yupanqui.[2] Because he was illegitimate and the ravages of the conquest were underway, the boy was given only his mother's surname. Under the Spanish system of caste that developed, he would have been classified as a criollo (for being of Spanish descent, born in South America) and mestizo (for his mixed parents).

Gómez lived with his mother and her Inca family for the first ten years of his life. His first language was Quechua and he also learned Spanish from his early years.[3] His father took the boy into his household and gave him some education. Suárez de Figueroa received an inheritance of 4,000 in currency when his father died in 1559. The next year at the age of 21, he decided to travel to Spain.[3]

Travel to Spain and later years

Suárez de Figueroa reached Spain in 1561, while there was still fighting in his native country under the conquest. The Spanish did not achieve final victory until 1572. He traveled to Montilla, where he met his father's brother, Alonso de Vargas. This uncle acted as the young man's protector and helped him make his way.[3] The younger man soon traveled to Madrid to seek official acknowledgement as his father's son from the Crown, and he was allowed to take the name of Garcilaso de la Vega.[3] Also referred to as "El Inca" or "Inca Garcilaso de la Vega", he received an informal education in Spain. Together with his uncle's support, gaining his father's name helped him in society.

He remained in Spain and did not return to his native country (now Peru). As warfare continued in the conquest, he was at political and even physical risk there because of his royal Inca lineage. It is recorded that he died in Córdoba, Spain on 23 April 1616, but the date could also be the 22 or the 21, given the inaccuracy of the existing documents.

De la Vega entered Spanish military service in 1570 and fought in the Alpujarra mountains against the Moors after the Morisco Revolt. He received the rank of captain for his services to the Crown.

He received a first-rate, but informal European education in Spain after relocating there at age 21. His works are considered to have great literary value, and are not simple historical chronicles. He wrote from an important perspective, as his maternal family were the ruling Inca. He portrays the Inca as benevolent rulers who governed a country where everybody was well-fed and happy before the Spanish came. Having learned first-hand about daily Inca life from his maternal relatives, he was able to convey that in his writings. As an adult, he also gained the perspective to describe accurately the political system of tribute and labor enforced by the Incas from the subsidiary tribes in their empire.

Baptized and reared as Christian, De la Vega portrayed Incan religion and the expansion of its empire from a viewpoint influenced by his upbringing.[citation needed] He did not acknowledge or discuss the human sacrifices now known to have been part of Inca practice. Whether this was an effort to portray his Inca ancestors in a more positive light, given what he knew about Spanish views, or ignorance related to having lived most of his life in Spain, is not known.

De la Vega's first work was La Florida del Inca, an account of Hernando de Soto's expedition and journey in Florida. The work was published in Lisbon in 1605 and became popular. It describes de Sotos's expedition according to its own records and information Garcilaso gathered during the years. He defended the legitimacy of imposing the Spanish sovereignty in conquered territories and submitting them to Christian jurisdiction. At the same time, he expresses and defends the dignity, courage and rationality of the Native Americans. This work was translated and published in English in 1951.

Historians have identified problems with using La Florida as an historical account. Milanich and Hudson warn against relying on Garcilaso, noting serious problems with the sequence of events and location of towns in his narrative. They say, "some historians regard Garcilaso's La Florida to be more a work of literature than a work of history."[4] Lankford characterizes Garcilaso's La Florida as a collection of "legend narratives", derived from a much-retold oral tradition of the survivors of the expedition.[5] The Library of Congress in Washington, DC, has these two volumes online, scanned from a historic French-language edition published long before English editions. (See in External links below)

While in Spain, Garcilaso wrote his most well-known work, Comentarios Reales de los Incas, published in Lisbon in 1609. This was based on stories and oral histories told by his Inca relatives when he was a child in Cuzco. The Comentarios have two sections and volumes: the first was primarily about Inca life. The second, about the Spanish conquest of Peru, was published in 1617. This work was first published in English in London in 1685, translated by Sir Paul Rycaut and titled The Royal Commentaries of Peru.[6] More than a century and a half later, in 1758 when the uprising against colonial oppression led by Tupac Amaru II gained momentum, Charles III of Spain banned the Comentarios from being published in Quechua language in Lima or distributed there due to its "dangerous" content.

The book was not printed again in the Americas until 1918, but copies continued to be circulated secretly.[7] It was translated and printed in English in 1961 in the United States as The Incas, and in another edition in 1965 as Royal Commentaries of the Incas. (See below)

De la Vega lived until 1591 in the town of Montilla, where his father's brother lived. He next moved to Córdoba. He lived there until his death on 23 April 1616. He had at least two sons, born of relationships with different servants. One son was recorded as being born in 1570; he might have died at a very young age. With another servant, Garcilaso had a second son, Diego de Vargas, born in 1590. Vargas helped his father copy the Royal Commentaries and survived him until at least 1651.