From Infogalactic: the planetary knowledge core
Jump to: navigation, search
For other uses, see Incantation (disambiguation).

An incantation or enchantment is a charm or spell created using words. An incantation may take place during a ritual, either a hymn or prayer, and may invoke or praise a deity. In magic, occultism, shamanism, and witchcraft it is used with the intention of casting a spell on an object or a person. The term derives from Latin "incantare" (tr.), meaning "to chant (a magical spell) upon," from in- "into, upon" and cantare "to sing".

In medieval literature, folklore, fairy tales and modern fantasy fiction, enchantments (from the Old French "enchantement") are charms or spells. The term was loaned into English since around AD 1300. The corresponding native English term being "galdr" "song, spell". It has led to the terms "enchanter" and "enchantress", for those who use enchantments.

The weakened sense "delight" (compare the same development of "charm") is modern, first attested in 1593 (OED).

In folklore and fiction 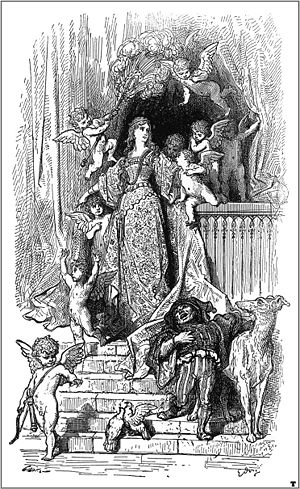 The enchantress Alcina makes herself appear beautiful, in Orlando Furioso

In traditional fairy tales or fantasy fiction, an enchantment is a magical spell that is attached, on a relatively permanent basis, to a specific person, object or location, and alters its qualities, generally in a positive way. The most widely known example is probably the spell that Cinderella's Fairy Godmother uses to turn a pumpkin into a coach. An enchantment with negative characteristics is usually instead referred to as a curse.

Conversely, enchantments are also used to describe spells that cause no real effects but deceive people, either by directly affecting their thoughts or using some kind of illusions. Enchantresses are frequently depicted as able to seduce by such magic. Other forms include deceiving people into believing that they have suffered a magical transformation. 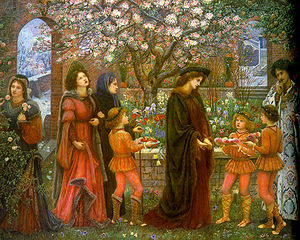 The Enchanted Garden of Messer Ansaldo by Marie Spartali Stillman

To be enchanted is to be under the influence of an enchantment, usually thought to be caused by charms or spells.

The Latin incantare, which means 'to utter an incantation', or cast a magic spell, forms the basis of the word "enchant", with deep linguistic roots going back to the Proto-Indo-European kan- prefix. So it can be said that an enchanter or enchantress casts magic spells, or utters incantations, similar to what are called Mantra in Sanskrit.

Some collections of charms