From Infogalactic: the planetary knowledge core
Jump to: navigation, search
This article is about the city. For the airport, see Incheon International Airport. For other uses, see Incheon (disambiguation).

Incheon (Hangul: 인천; hanja: 仁川; Korean pronunciation: [intɕʰʌn]; formerly romanized as Inchon; literally "kind river"), officially the Incheon Metropolitan City, is a city located in northwestern South Korea, bordering Seoul and Gyeonggi to the east. Inhabited since the New Stone Age, Incheon was home to just 4,700 people when it became an international port in 1883. Today, 2.9 million people live in the city, making it Korea’s third most populous city after Seoul and Busan. The city's growth has been assured in modern times with the development of its port due to its natural advantages as a coastal city and its proximity to the South Korean capital. It is part of the Seoul Capital Area, along with Seoul itself and Gyeonggi Province, forming the world's second largest metropolitan area by population.

Incheon has since led the economic development of Korea by opening its port to the outside world, ushering in the modernization of Korea as a center of industrialization. In 2003, the city was designated as Korea’s first free economic zone. Since then, large local companies and global enterprises have increasingly invested in the Incheon Free Economic Zone, including Samsung and LG which chose Songdo International City as its new investment destination for its bio industry.

As an international city, Incheon has held numerous large scale international conferences, such as the Incheon Global Fair & Festival in 2009. The 17th Asian Games Incheon 2014 was also held in Incheon on September 19, 2014. Incheon has established itself as a major transportation hub in northeast Asia with the world-renowned Incheon International Airport and Incheon Port. The city is also home to the Green Climate Fund, an international organization addressing environmental issues.

The first historical record of the Incheon area dates back to 475 AD, during the reign of King Jangsu of Goguryeo, by the name of Michuhol, which is supposed to be located on today's Munhak Hill (문학산). The area underwent several name changes with successive kingdoms and dynasties. In Goryeo era, Incheon was called Gyeongwon (경원) or Inju (인주). The current name was first established in 1413. Later, Incheon County became Incheon Metropolitan Prefecture (dohobu, 도호부). Old Incheon consisted of today's southern Incheon (i.e. Jung-gu, Dong-gu, Nam-gu, Yeonsu-gu, and Namdong-gu) and northern part of Siheung City. The city centre was Gwangyo-dong, where the prefecture office (도호부청사) and the local academy (hyanggyo, 향교) were located. The "original" two remaining buildings of the Incheon prefecture office are located in Munhak Elementary School, while the newly built (in 2001) prefecture office buildings are right across from Munhak Baseball Stadium.

Another historical name of the city, Jemulpo (alternatively Romanized as Chemulpo), was not widely used until the opening of the port in 1883.[2][3] After the opening of the Incheon port, the city centre moved from Gwangyo to Jemulpo. Today, either Jemulpo or Gwangyo-dong is considered "Deep Incheon"(원인천). It was renamed as Jinsen during Japanese rule in Korean peninsula.

Incheon was originally part of Gyeonggi Province, but was granted Directly Governed (now Metropolitan) City status on July 1, 1981; the city officially separated from the province. In 1989, neighbouring islands and Gyeyang township of Gimpo County[4] were ceded to Incheon and in 1995 Geomdan township of Gimpo Country and two counties of Ganghwa and Onjin were annexed to Incheon Metropolitan City.

Incheon was known as Inchon prior to South Korea's adoption of a new Romanization system in 2000.

The city was the site of the Battle of Chemulpo Bay, where the first shots of the Russo-Japanese War were fired.

During the Korean War, Incheon was occupied by North Korean troops on 4 September 1950. Eleven days later, Incheon was the site of the Battle of Inchon, when United States troops landed to relieve pressure on the Pusan Perimeter and to launch a United Nations offensive northward. The result was a decisive UN victory and it was recaptured in 19 September 1950.[5] The USS Inchon was named after the tide-turning battle that ensued.

Incheon has also hosted a series of major international events. The Global Fair & Festival 2009 Incheon, Korea was held in the Songdo District in August 2009. It was open from August 7 to October 25 for a period of 80 days. It was a comprehensive international event with global institutions and corporations as participants.Various musicians and artists performed during the event.

The city hosted a meeting of the G20 Finance Ministers in February 2010.[6] Incheon was the site of the third Global Model United Nations Conference, held from 10th to the 14th of August 2011.

It first hosted the Incheon Women Artists' Biennale in 2004 which expanded into welcoming international artists in its subsequent 2007, 2009[7] and 2011.

Incheon hosted the Asian Games in 2014.

On February 27, 2007, Incheon declared itself an "English City," and inaugurated the "Incheon Free English Zone" program. The goal of the program is to make Incheon as much an English speaking city as Hong Kong and Singapore are.[8] This is for the ultimate purpose of establishing Incheon as a commercial and business hub of northeast Asia (see Free Economic Zone below). The official slogan of the program is "Smile with English."

Incheon is home to a number of colleges and universities:

Incheon experiences each of its four seasons, distinctly feeling the rise and fall of temperature and humidity. The temperature however, never rises to an extreme, and the climate of the city is essentially mild. Incheon is swept by the seasonal winds as the northwesterly winds strike the city in the winter and the summer in Incheon is affected by gusts of the warm southwesterly winds.[10]

Incheon forms the heart of manufacturing industry of Seoul Capital Area along with Seoul. Namdong Industrial Park and GM Incheon plant are key parts of Incheon's manufacturing industry. In recent years, large global companies are increasingly investing in Incheon Free Economic Zone, which is being developed aiming for a business hub of Northeast Asia.

Headquarters of several international organizations including GCF are located in new Songdo district in the southern part of the city.

Incheon is a major domestic and international transport hub for Korea. 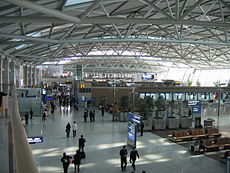 The International Passenger Terminal located at the port offers ferries to five cities in China: Dalian, Qingdao, Tianjin, Dandong, and Weihai. There are also ferries to Incheon's outlying islands as well as Baengnyeong Island inside of the Northern Limit Line.

Incheon Bus Terminal, located at its eponymous subway stop, offers express bus transportation to all parts of Korea. Many city bus lines offer transportation within city limits as well as to the neighboring cities of Bucheon, Gimpo, Seoul, and Siheung.

Many BRT lines offer transportation between Seoul and Incheon.

Local service to Guro, Seoul, Cheongnyangni, Uijeongbu and Soyosan is offered by Seoul's subway Line 1. The line has 11 stations within Incheon and connects to the Incheon Subway at Bupyeong station.

Rapid service on the same line to Yongsan Station in Seoul depart from Dongincheon station and stops at major stations.

The Airport Express (AREX) line runs from Incheon International Airport to Seoul Station via Gimpo International Airport. The Incheon-Gimpo section was opened in March 2007 and was extended to Seoul station in December 2010. Passengers can choose a high-speed service stopping only at Incheon airport and Seoul, which takes 43 minutes but departs only every half-hour; or the all-station service which takes 53 minutes but leaves every six minutes.

The Incheon Subway has a single subway line serving the city. It connects to the Seoul Metropolitan Subway system at Bupyeong station, and AREX line at Gyeyang station. The line has 28 stations on 29.4 kilometres (18.3 miles) of track. The Incheon subway is operated by the Incheon Rapid Transit Corporation (IRTC).

Korail is constructing a new subway line from Incheon station to Suwon station by 2013. It will have 10 stations within Incheon.

The Incheon Free Economic Zone consists of the three regions of Songdo, Cheongna, and the island of Yeongjong, and has a total area of 51,739 acres (20,938 ha). The goal of IFEZ is to transform these three areas into hubs for logistics, international business, leisure, and tourism for the Northeast Asian region. The term 'Free Economic Zone' applies to the development in these three areas with the aim of improving the business environment for foreign-invested enterprises and the living conditions for foreigners. The zone is a specially designated area to create the most favorable business and living environment where foreign nationals can live and invest freely and conveniently. Incheon's Free Economic Zone, the first in Korea, was officially designated by the Korean government in August 2003. IFEZ is planned to be a self-contained living and business district featuring air and sea transportation, a logistics complex, an international business center, financial services, residences, schools and hospitals, and shopping and entertainment centres.

Songdo International City began development in 1994 and is being built on reclaimed land. It is designated to become a center of diverse international businesses, a hub for international trade, an area for knowledge-based technologies, and a place for eco-friendly urban living. Construction is due to be completed in 2020.

As of 2012, Yeongjong International City’s 34,183 acres (13,833 ha) centering on the Incheon International Airport is being developed as an eco-friendly airport city scheduled to be completed by 2020. Paradise Co, a South Korean casino operator, said in October 2013 that it will build the country’s largest casino on Yeongjong Island.[12]

The Cheongna district, on the mainland adjacent Yeongjong Island, will focus on entertainment and will feature a world class theme park. It will also be a residential area with sports facilities, a floriculture complex, and a business area specially designed for international finance.

Main article: List of districts and counties of Incheon 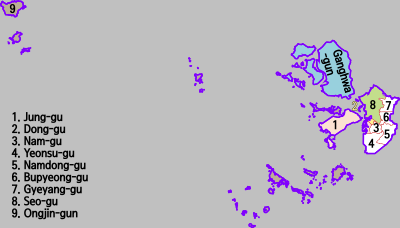 Incheon is divided into 8 districts (gu) and 2 counties (gun).

According to the census of 2005, of the people of Incheon 36.1% follow Christianity (22.4% Protestantism and 13.7% Catholicism) and 13.8% follow Buddhism.[13] 50.1% of the population is mostly not religious or follow Muism and other indigenous religions. 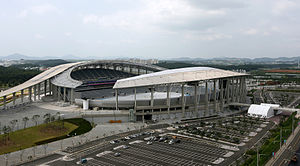 Yeonhui Cricket Ground Yeonhui Cricket Ground is a newly built cricket stadium in Incheon. The 2014 Asian Games will feature cricket for both the men's and the women's event and this ground will be used for the scheduled cricket matches to be played in the games. It has been reported that the crowd capacity of this ground will be 2,353. This first cricket stadium in South Korea.

Incheon is twinned with:[15]