Increase Mather (June 21, 1639 O.S. – August 23, 1723 O.S.) was a major figure in the early history of the Massachusetts Bay Colony and Province of Massachusetts Bay (now the Commonwealth of Massachusetts). He was a Puritan minister who was involved with the government of the colony, the administration of Harvard College, and most notoriously, the Salem witch trials. He was the son of Richard Mather, and the father of Cotton Mather, both influential Puritan ministers.

Mather was born in Dorchester, Massachusetts Bay Colony,[1] on June 21, 1639 to Rev. Richard Mather and Kathrine Holt Mather,[2] following their participation in the Great Migration from England due to nonconformity with the Church of England.[3] He was the youngest of six[4] brothers, the others being: Samuel, Nathaniel, Eleazar, Joseph, and Timothy.[4] Three of his brothers (Samuel, Nathaniel and Eleazar) also became ministers.[5]

In 1651 Mather was admitted to Harvard University where he roomed with and studied under Robert Massey. When he graduated in 1656 with a B.A.,[2] he began to train for the ministry and gave his first sermon on his 18th birthday.[6] He quickly left Massachusetts and went to Ireland, where he studied at Trinity College, Dublin for an M.A.. He graduated in 1659,[1] and spent the next 3 years as a chaplain attached to a garrison in the Channel Islands.

During his time at Trinity College he was licensed as a Commonwealth Minister by Oliver Cromwell to the joint charge of St. Tida's Church at Ballyscullion, and St. Swithan's Church in Magherafelt. On Cromwell's death in 1658 his joint charge at these South Londonderry churches was quickly severed by the new authorities. Harvard later awarded him the first honorary degree in the New World, becoming a Doctor of Sacred Theology, in 1692.[2] 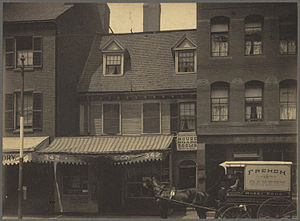 The house built in 1677 by Increase Mather near the north corner of Hanover and North Bennet Streets, Boston, survived into the 20th century

Establishing himself in Massachusetts

In 1661, with the advent of the English Restoration and resurgence of Anglicanism, Increase returned to Massachusetts, where he married Maria Cotton. She was his stepsister by virtue of his father's marriage to Sarah Hankredge, widow of John Cotton and mother of Maria.[6] She gave birth to Cotton Mather in February, 1663. In 1676, he published A Brief History of the War with the Indians in New-England,[7] a contemporary account of King Philip's War.

He was ordained as minister of the North Church,[8] whose congregation included many of the upper class and governing class, on May 27, 1664. He held this post until he died.[1] By virtue of his position he quickly became one of the most influential people in the colony, both religiously and politically.

On June 11, 1685 he became the Acting President of Harvard University (then Harvard College) and steadily advanced: A little over a year later on July 23, 1686 he was appointed the Rector. On June 27, 1692, he became the President of Harvard, a position which he held until September 6, 1701.[2] He was rarely present on campus or in the town, especially during his term of Rector as he was out of the Colony for all but two years of his term in that office. Despite his absences he did make some changes: re implementation of Greek and Hebrew instruction, replacement of classical Roman authors with Biblical and Christian authors in ethics classes, enactment of requirements that students attend classes regularly, live and eat on campus, and that seniors not haze other students.[2]

While politics and Puritan religion were closely related during Increase's lifetime, his first direct involvement with politics occurred as a result of James II of England's manipulation of the New England governments. In 1686 James revoked the Charter of Massachusetts in the process of creating the Dominion of New England.[1]

The Dominion was headed by Edmund Andros, who not only disliked puritanism and was haughty,[2] but ruled as a near absolute dictator: Town meetings were outlawed, leaving the Dominion without consent of the governed, marriage was removed from the clergy, and the Old South Church was temporarily appropriated for Anglican services.[9]

The 1687 Declaration of Indulgence, prohibiting discrimination against Catholics, saw staunch opposition from the Puritan establishment. When Mather successfully roused opposition to revocation of the charter, he was nearly framed for treason. He traveled to London (eluding spies out to catch him) to petition the King. While engaged in petitioning he published pieces to build popular support for his positions, such as A Narrative of the Miseries of New-England, By Reason of an Arbitrary Government Erected there Under Sir Edmund Andros (1688) and A Brief Relation for the Confirmation of Charter Privileges (1691).[6]

He attempted to restore the old charter[1] and obtain a royal charter for Harvard; however, he abandoned that course and changed his petitions to a new charter not lacking any of the rights previously granted. Following the Glorious Revolution and subsequent overthrow of Andros, a new charter was granted to the colony.[2] The 1692 charter was a major departure from its predecessor, granting sweeping home rule, establishing an elective legislature, enfranchising all freeholders (previously only men admitted to a congregation could vote), and uniting the Massachusetts Bay Colony and Plymouth Colony.[2] Following Andros' deposition and arrest,[9] he had William Phips appointed as Royal Governor and they returned to Massachusetts, arriving on May 14, 1692.[10] Following his return, the administration of Harvard grew increasingly insistent that he reside nearer to the institution. Not wanting to leave his Second Church, he did not do so, and eventually resigned the Presidency.[2]

Involvement in the Salem witch trials

As an influential member of the community, having handpicked Governor Phips and his deputy Stoughton, Increase was involved in the notorious witch hysteria of Salem, Massachusetts. As the court of oyer and terminer was beginning to hear cases of suspected witchcraft, Increase's son Cotton wrote a letter known as "The Return of Several Ministers Consulted," which urged caution but failed to denounce the use of "spectral evidence".[11] In June and July 1692 as the trials and executions grew, Mather made a number of sermons interpreted as a plea to cool the heated atmosphere.[11] In September he published Cases of Conscience Concerning Evil Spirits Personating Men, Witchcrafts, infallible Proofs of Guilt in such as are accused with that Crime (more commonly known as just "Cases of conscience concerning evil spirits"), which defended the judges and trials, but strongly denounced the spectral evidence used by them. It said, "It were better that Ten Suspected Witches should escape, than that one Innocent Person should be Condemned." (A slightly altered version of this phrase would later become known as Blackstone's formulation.) Notwithstanding this, his reputation was not improved afterwards or for posterity due to his association with the trials as well as his subsequent refusal, for whatever reasons, to denounce them.[10] He was also briefly mentioned in a thorough treatment of his son Cotton by Robert Calef in his comprehensive book of the Salem Trials and their aftermath More Wonders of the Invisible World''[12] (referred to as More Wonders of the Spiritual World by the Encyclopædia Britannica Eleventh Edition).[6] Increase Mather was said to have burned Calef's book in Harvard Yard. 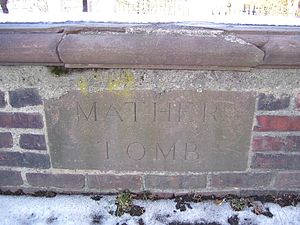 In August 1714, following Maria's death, he remarried, to his second wife, Ann. On September 27, 1722, he fainted and was bedridden thereafter. In August 1723 he suffered bladder failure and died three weeks later on August 23, 1723, in Boston, aged 84, and was buried on Copp's Hill.[13] Before his death, he took lodging at the retreat of Mineral Spring Pond to recover from his illness and drink from the famous healing waters of the springs from Spring Pond.[14]

Throughout his life Mather was a staunch Puritan, opposing anything openly contradictory to, mutually exclusive with, or potentially "distracting" from his religious beliefs. He supported suppression of intoxication, unnecessary effort on Sundays and ostentatious clothing. He was initially opposed to the Half-Way Covenant but later supported it. He firmly believed in the direct appearance of God's disfavor in everyday life, e.g. the weather, political situations, attacks by Native Americans, fires and floods, etc.[6][10]

He was strenuous in attempting to keep people to his idea of morality,[2] making strong use of jeremiads to try to prevent indifference and especially to try to get government officials to enforce public morality. During his tenure at Harvard he regularly stamped out any relaxation of Puritan strictness, such as latitudinarianism, which had flourished during his overseas absence.[2]

Following his acceptance of the Covenant, Solomon Stoddard and others attempted to further liberalize Puritanism by baptism of children who had nonmember parents[2] and admittance of all but the openly immoral to services.[6] To try and stop this, Mather had a synod called to outlaw similar measures. A declaration was adopted, but never made binding.[6] Following this, reform-minded members were sent to the body and it took on a less conservative tone, bitterly disappointing Mather.

The stated reason for his first name was "...the never-to-be-forgotten increase, of every sort, wherewith God favoured the country about the time of his nativity."[6] "Increase" is a literal translation of the Hebrew name "Yosëf" (Joseph).[citation needed]

Among his more than 125 published works, the following are most notable (Note that his name, Latinized, was "Crecentius Matherius"):

Increase Mather is played by Stephen Lang in the 2014 TV series Salem.