During the American Revolution, the legal separation of the Thirteen Colonies from Great Britain occurred on July 2, 1776, when the Second Continental Congress voted to approve a resolution of independence that had been proposed in June by Richard Henry Lee of Virginia declaring the American Colonies independent from British rule.[5][6] After voting for independence, Congress turned its attention to the Declaration of Independence, a statement explaining this decision, which had been prepared by a Committee of Five, with Thomas Jefferson as its principal author. Congress debated and revised the wording of the Declaration, finally approving it on July 4. A day earlier, John Adams had written to his wife Abigail:

The second day of July, 1776, will be the most memorable epoch in the history of America. I am apt to believe that it will be celebrated by succeeding generations as the great anniversary festival. It ought to be commemorated as the day of deliverance, by solemn acts of devotion to God Almighty. It ought to be solemnized with pomp and parade, with shows, games, sports, guns, bells, bonfires, and illuminations, from one end of this continent to the other, from this time forward forever more.[7]

Adams's prediction was off by two days. From the outset, Americans celebrated independence on July 4, the date shown on the much-publicized Declaration of Independence, rather than on July 2, the date the resolution of independence was approved in a closed session of Congress.[8]

Historians have long disputed whether Congress actually signed the Declaration of Independence on July 4, even though Thomas Jefferson, John Adams, and Benjamin Franklin all later wrote that they had signed it on that day. Most historians have concluded that the Declaration was signed nearly a month after its adoption, on August 2, 1776, and not on July 4 as is commonly believed.[9][10][11][12][13] 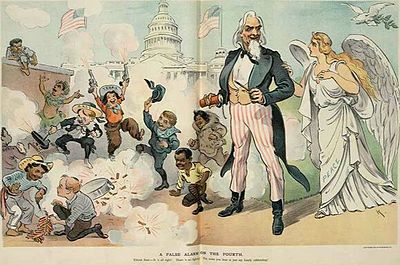 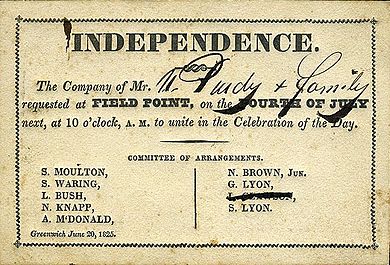 An 1825 invitation to an Independence Day celebration

Independence Day is a national holiday marked by patriotic displays. Similar to other summer-themed events, Independence Day celebrations often take place outdoors. Independence Day is a federal holiday, so all non-essential federal institutions (like the postal service and federal courts) are closed on that day. Many politicians make it a point on this day to appear at a public event to praise the nation's heritage, laws, history, society, and people.

Families often celebrate Independence Day by hosting or attending a picnic or barbecue and take advantage of the day off and, in some years, long weekend to gather with relatives. Decorations (e.g., streamers, balloons, and clothing) are generally colored red, white, and blue, the colors of the American flag. Parades are often in the morning, while fireworks displays occur in the evening at such places as parks, fairgrounds, or town squares.

The night before the Fourth was once the focal point of celebrations, marked by raucous gatherings often incorporating bonfires as their centerpiece. In New England, towns competed to build towering pyramids, assembled from barrels and casks. They were lit at nightfall, to usher in the celebration. The highest were in Salem, Massachusetts (on Gallows Hill, the famous site of the execution of 13 women and 6 men for witchcraft in 1692 during the Salem witch trials, where the tradition of bonfires in celebration had persisted), composed of as many as forty tiers of barrels; these are the tallest bonfires ever recorded. The custom flourished in the 19th and 20th centuries, and is still practiced in some New England towns.[19]

Independence Day fireworks are often accompanied by patriotic songs such as the national anthem "The Star-Spangled Banner", "God Bless America", "America the Beautiful", "My Country, 'Tis of Thee", "This Land Is Your Land", "Stars and Stripes Forever", and, regionally, "Yankee Doodle" in northeastern states and "Dixie" in southern states. Some of the lyrics recall images of the Revolutionary War or the War of 1812. 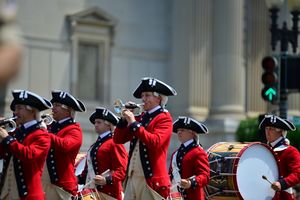 Firework shows are held in many states, and many fireworks are sold for personal use or as an alternative to a public show. Safety concerns have led some states to ban fireworks or limit the sizes and types allowed. In addition to safety concerns local and regional weather conditions may dictate whether the sale or use of fireworks in an area will be allowed. Some local or regional firework sales may be limited or prohibited because of dry weather, drought conditions, or other specific concerns. On these occasions the public may be prohibited from purchasing or discharging fireworks, but professional displays (such as may be found at sport events) may still tale place provided that certain safety precautions have been taken. Illicit traffic transfers many fireworks from less restrictive states.

A salute of one gun for each state in the United States, called a "salute to the union", is fired on Independence Day at noon by any capable military base.[20]

In 2009, New York City had the largest fireworks display in the country, with over 22 tons of pyrotechnics exploded.[21] Other major displays are in Chicago on Lake Michigan; in San Diego over Mission Bay; in Boston on the Charles River; in St. Louis on the Mississippi River; in San Francisco over the San Francisco Bay; and on the National Mall in Washington, D.C..

During the annual Windsor-Detroit International Freedom Festival, Detroit, Michigan hosts one of the world's largest fireworks displays, over the Detroit River, to celebrate Independence Day in conjunction with Windsor, Ontario's celebration of Canada Day.

The first week of July is typically one of the busiest American travel periods of the year, as many people utilize the holiday for extended vacation trips.[22] 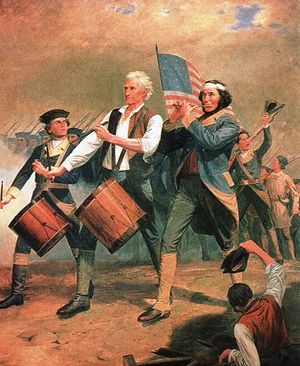 Originally entitled Yankee Doodle, this is one of several versions of a scene painted by A. M. Willard that came to be known as The Spirit of '76. Often imitated or parodied, it is a familiar symbol of American patriotism

The Philippines celebrates July 4 as its Republic Day to commemorate that day in 1946 when it ceased to be a U.S. territory and the United States officially recognized Philippine Independence.[29] July 4 was intentionally chosen by the United States because it corresponds to its Independence Day, and this day was observed in the Philippines as Independence Day until 1962. In 1964, the name of the July 4 holiday was changed to Republic Day. In Rwanda, July 4 is an official holiday known as Liberation Day, commemorating the end of the 1994 Rwandan Genocide in which the U.S. government also played a role. Denmark also celebrates American independence on July 4. National parks in Denmark are said to hold the largest July 4 celebrations outside of the United States.[30]