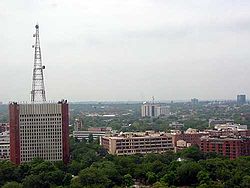 All India Radio (AIR), officially known since 1956 as Ākāshvāṇī (literally, "Voice from the Sky"), is the national public radio broadcaster of India and a division of Prasar Bharati. Established in 1930,[2] it is the sister service of Prasar Bharati's Doordarshan, the national public television broadcaster. AIR has covered more than 99% of the Indian Population as per the latest information given by Minister of Information and Broadcast. All India Radio is one of the largest radio networks in the world. Its headquarters is at the Akashvani Bhavan in New Delhi. Akashvani Bhavan houses the Drama Section, the FM Section and the National Service. Doordarshan Kendra (Delhi) offices are also located on the sixth floor at Akashvani Bhavan.

The word ākāśavāni (आकाशवाणी) is taken from Sanskrit. In Sanskrit Akashvani means "celestial announcement," or a gift or message from heaven. Often in Hindu mythological stories, folk-tales and fables like Panchatantra & Hitopadesha, whenever Gods wanted to say something, an Akashvani occurred. Literally, akash means "sky" and vani means "sound" or "message".[3]

The word "Akashvani" was coined by M. V. Gopalaswamy after setting up the nation’s first private radio station in his residence, "Vittal Vihar" (about 200 yards from AIR’s current location in Mysore) in 1936.[4] Akashvani seemed to be an appropriate name for a radio broadcaster and was later adopted as All India Radio's on-air name after independence.

In British India, broadcasting began in July 1923 with programmes by the Radio Club of Mumbai and other radio clubs. According to an agreement of 23 July 1927, the private Indian Broadcasting Company LTD (IBC) was authorized to operate two radio stations; the Mumbai station began on 23 July 1927, and the Calcutta station followed on 26 August 1927. On 1 March 1930, however, the company went into liquidation. The government took over the broadcasting facilities, beginning the Indian State Broadcasting Service (ISBS) on 1 April 1930 (on an experimental basis for two years, and permanently in May 1932). On 8 June 1936; the ISBS was renamed All India Radio.[2]

On 1 October 1939 the External Service began with a broadcast in Pushtu; it was intended to counter radio propaganda from Germany directed to Afghanistan, Iran and the Arab nations. When India became independent in 1947, the AIR network had only six stations (in Delhi, Mumbai, Calcutta, Chennai, Lucknow, and Tiruchirappalli); three radio stations at Lahore, Peshawar and Karachi fell in the share of Pakistan. the total number of radio sets at that time was about 275,000 in India. On 3 October 1957 the Vividh Bharati Service was launched, to compete with Radio Ceylon. Television broadcasting began in Delhi in 1959 as part of AIR, but was split off from the radio network as Doordarshan on 1 April 1976.[5] FM broadcasting began on 23 July 1977 in Chennai, and was expanded during the 1990s.[6] 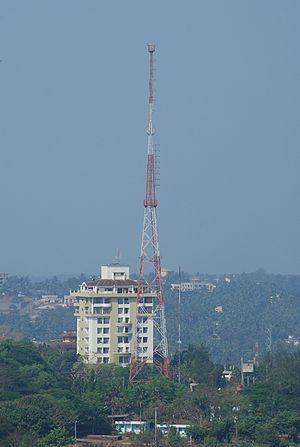 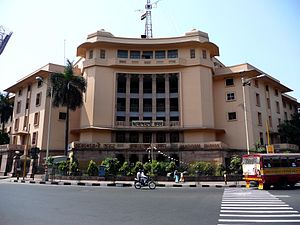 Kolkata Centre of All India Radio

AIR has many services in a number of languages, each serving different regions across India.

Vividh Bharati is one of the best-known services of AIR. Its name roughly translates as "Multi-Indian Service", and it is also known as the Commercial Broadcasting Service (CBS). It is the commercially most accessible of the AIR networks and is popular in Mumbai and other large cities. Vividh Bharati offers a wide range of programmes including news, film music and comedy programs. It operates on different mediumwave-band frequencies for each city.

Some programs broadcast on Vividh Bharati are:

The headquarters of the Regional Deputy Directors General are located at Delhi and Chandigarh (NR), Lucknow and Bhopal (CR), Guwahati (NER), Kolkata (ER), Mumbai and Ahmedabad (WR), Chennai and Bangalore (SR).[8] All frequencies are in kHz, unless otherwise noted.

The external services of All India Radio broadcast in 27 languages to countries outside India—primarily via high-power shortwave band broadcasts, although medium wave is also used to reach neighbouring countries. In addition to broadcasts targeted at specific countries by language, there is a General Overseas Service broadcasting in English with 8¼ hours of programming each day aimed at a general international audience. The external broadcasts were begun on 1 October 1939 by the British government to counter the propaganda of the Nazis directed at the Afghan people. The first broadcasts were in Pushto, beamed to Afghanistan and the North-West Frontier Province. Soon broadcasts began in other languages including Dari, Persian, Arabic, English, Burmese, Japanese, Chinese, Malay and French. The external services broadcast in 16 foreign and 11 Indian languages, with a total program output of 70¼ hours per day on medium- and shortwave.

Two high powered FM stations of All India Radio are under installation in Amritsar and Fazilka in Punjab to supplement the programs put out from transmitters operating from Jalandhar, New Delhi, Chandigarh and Mumbai and to improve the broadcast services during disturbed weather conditions in the border regions of Punjab.

The longest daily broadcast is the Urdu Service to Pakistan, around the clock on DTH and on short- and mediumwave for 12¼ hrs. The English-language General Overseas Service are broadcast 8¼ hours daily. During Hajj, there are special broadcasts beamed to Saudi Arabia in Urdu. The external services of AIR are also broadcast to Europe in DRM (Digital Radio Mondiale) on 9950 kHz between 1745-2230 UTC.

The transmissions are broadcast by high-power transmitters located at Aligarh, Bengaluru, Chennai, Delhi, Gorakhpur, Guwahati, Mumbai and Panaji on shortwave and from Jalandhar, Kolkata, Nagpur, Rajkot and Tuticorin on mediumwave. Soon All India Radio Amritsar will start a booster service on FM band too. Some of these transmitters are 1000 kW (1 MW) or 500 kW. Programs are beamed to different parts of the world except the Americas and received in very good Reception Quality in the Target areas. In each language service, the program consists of news, commentary, a press review, talks on matters of general or cultural interest, feature programmes, documentaries and music from India and the target region. Most programs originate at New Broadcasting House on Parliament Street in New Delhi, with a few originating at SPT Bengaluru, Chennai, Hyderabad, Jalandhar, Kolkata, HPT Malad Mumbai, Thiruvananthapuram and Tuticorin.

The External Services Division of AIR is a link between India and rest of the world, especially in countries with Indian emigrants and people of Indian origin. It broadcasts the Indian point of view on matters of national and international importance, and demonstrates the Indian way of life through its programs. QSL cards (which are sought-after by international radio hobbyists) are issued to radio hobbyists by AIR in New Delhi for reception reports of their broadcasts.

All India Radio launched news-on-phone service on 25 February 1998 in New Delhi; it now has service in Chennai, Mumbai, Hyderabad, Indore, Patna and Bangalore. The service is accessible through STD, ISD and local calls. There are plans to establish the service in 11 more cities: Ahmedabad, Bhopal, Guwahati, Gwalior, Jabalpur, Jaipur, Kolkata, Lucknow, Ranchi, Shimla and Thiruvananthapuram. English and Hindi hourly news bulletins may be heard live.[9] News in MP3 format may be directly played from the site, and filenames are time-stamped. AIR news bulletins are available in nine regional languages (Tamil, Kannada, Gujarati, Bengali, Marathi, North East, Punjabi, Telugu and Urdu).

Direct-to-home (DTH) service is offered on 21 channels via Insat.

There is a long tradition of documentary features on AIR. There is great interest in radio documentaries, particularly in countries like India, Iran, South Korea and Malaysia. The doyen of English Features was Melville De Mellow and of Hindi Features was Shiv Sagar Mishra.This format has been revived because of its flexibility, cost-cutting capacity, messaging potential and creative potential with producers such as Viren Goyal,"Som Dutt Sharma", Chitra Narain, R. G. Narula and Danish Iqbal.Som Dutt Sharma's vast experience as Top Grade Film Division Writer is reflected in the calibre of his work in the feature production.He has brought the rare combination of Innovation,facts and creativity together to present an unforgettable aural experience for the senses.His acclaimed features are-"Anahad Naad,Kathak katha,Sadhna key Sakhsya and Vani mein Ithihas". Iqbal has brought his experience as a drama producer to the documentary field; his documentary "Yeh Rishta Kya Kehlata Hai" makes effective use of narrative and ambient sounds. The documentary is a heartfelt account of an unseen bridge between a Kashmiri, Shikarah Wala, and his auto rickshaw-driver friend in Delhi. Although they never met, their unseen bond transcends the barriers of political, religious and regional prejudice. Because Narula, Chitra and Danish had a long tenure at Delhi and creative collaboration with media institutes, their influence is seminal in shaping the thinking of their colleagues. Chitra and Narula were rewarded for their work, and Danish twice received the Public Service Broadcasting Award for his documentaries.

AIR's Central Drama Unit is responsible for the national broadcast of plays. Playwrights and producers such as Chiranjeet, Satyendra Sharat, Nirmala Agarwal and Danish Iqbal has been associated with the department. Plays produced by the CDU are translated and produced by regional stations. Since its inception in the 1960s the unit has produced more than 1,500 plays, and the CDU is a repository of old scripts and productions. The National Programme of Plays is broadcast by the CDU of AIR the fourth Thursday of each month at 9.30 pm. On the National Programme of Plays, the same play is produced in 22 Indian languages and broadcast at the same time by all regional and national network stations. The CDU also produces Chain Plays, half-hour dramas broadcast in succession by a chain of stations.