The Indian Regional Navigation Satellite System or IRNSS with an operational name of NAVIC (Sailor or Navigator in Hindi) which stands for NAVigation with Indian Constellation[2] is an Indian developed Navigation Satellite System that is used to provide accurate real-time positioning and timing services over India and region extending to 1500 km around India. The fully deployed NAVIC system consists of 3 satellites in GEO orbit and 4 satellites in GSO orbit, approximately 36,000 km altitude above earth surface.[1][3] However, the full system comprises nine satellites, including two on the ground as stand-by.[4] The requirement of such a navigation system is driven because access to foreign government-controlled global navigation satellite systems is not guaranteed in hostile situations, as happened to the Indian military depending on American GPS during the Kargil War.[5] The NAVIC would provide two services, with the Standard Positioning Service open for civilian use, and the Restricted Service (an encrypted one) for authorized users (including the military). Once the NAVIC is declared operational after checking the systems – space (satellites), ground (ground stations) and the user-end signal receivers, India will formally join a select group of nations owning their own Navigational Satellite system .[6]

The NAVIC constellation of seven satellites are in orbit and is expected to operate from June 2016 onwards.[7][8]

As part of the project, ISRO opened a new satellite navigation center within the campus of ISRO Deep Space Network (DSN) at Byalalu, in Karnataka on 28 May 2013.[9] A network of 21 ranging stations located across the country will provide data for the orbital determination of the satellites and monitoring of the navigation signal.

A goal of complete Indian control has been stated, with the space segment, ground segment and user receivers all being built in India. Its location in low latitudes facilitates a coverage with low-inclination satellites. Three satellites will be in geostationary orbit over the Indian Ocean. Missile targeting could be an important military application for the constellation.[10]

In April 2010, it was reported that India plans to start launching satellites by the end of 2011, at a rate of one satellite every six months. This would have made the NAVIC functional by 2015. But program was delayed.[14] India also launched 3 new satellites into space to supplement this.[15] 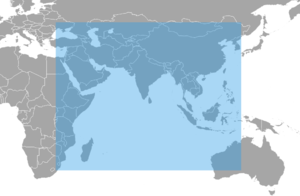 Coverage of the NAVIC.

The system consists of a constellation of seven satellites and a support ground segment. Three of the satellites in the constellation are located in geostationary orbit (GEO) at 32.5° East, 83° East, and 131.5° East longitude. The other four are inclined geosynchronous orbit (GSO). Two of the GSOs cross the equator at 55° East and two at 111.75° East.[23] The four GSO satellites will appear to be moving in the form of an "8".[24] In addition, various ground-based systems will control, track orbits, check integration and send radio signals to the satellites. The land-based Master Control Center (MCC) will run navigational software.[25]

NAVIC signals will consist of a Standard Positioning Service and a Precision Service. Both will be carried on L5 (1176.45 MHz) and S band (2492.028 MHz). The SPS signal will be modulated by a 1 MHz BPSK signal. The Precision Service will use BOC(5,2). The navigation signals themselves would be transmitted in the S-band frequency (2–4 GHz) and broadcast through a phased array antenna to maintain required coverage and signal strength. The satellites would weigh approximately 1,330 kg and their solar panels generate 1,400 watts. The system is intended to provide an absolute position accuracy of better than 10 meters throughout Indian landmass and better than 20 meters in the Indian Ocean as well as a region extending approximately 1,500 km around India.[26]

IRNSS-1B is the second out of seven in the Indian Regional Navigation Satellite System. It was very precisely and successfully placed in its orbit through PSLV-C24 rocket on 4 April 2014.[34]

IRNSS-1C is the third out of seven in the Indian Regional Navigation Satellite System series of satellites. The satellite was successfully launched using India's PSLV-C26 from the Satish Dhawan Space Centre at Sriharikota on 16 October 2014 at 1:32 am.[35][36]

IRNSS-1D is the fourth out of seven in the Indian Regional Navigation Satellite System series of satellites system. It was successfully launched using India's PSLV-C27 on 28 March 2015 at 5:19 pm.[28][37]

IRNSS-1E is the fifth out of seven in the Indian Regional Navigation Satellite System series of satellites system. It was successfully launched on 20 January 2016 using India's PSLV-C31 at 9:31 am.[38][39]

IRNSS-1F is the sixth out of seven in the Indian Regional Navigation Satellite System series of satellites system. It was successfully launched on 10 March 2016 using India's PSLV-C32 at 4:01 pm.[8][38]

IRNSS-1G is the seventh and final of the IRNSS series of satellites system. It was successfully launched on 28 April 2016 at 12:51pm IST using India's PSLV-C33. The successful launch of this satellite concludes the setting up of India's first indigenous Regional Navigation Satellite System.[40]