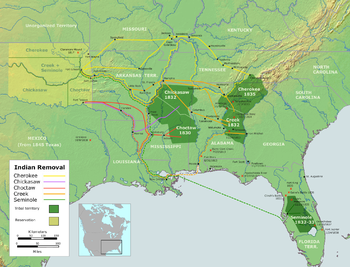 The Indian Removal Act was passed by Congress on May 28, 1830, during the presidency of Andrew Jackson. The law authorized the president to negotiate with southern Indian tribes for their removal to federal territory west of the Mississippi River in exchange for their ancestral homelands.[1][2][3]

The act enjoyed strong support from the non-Indian peoples of the South, who were eager to gain access to lands inhabited by the southeastern tribes. Christian missionaries protested against the law's passage. 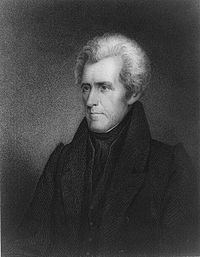 In the early 1800s, the United States government began a systematic effort to remove Native American tribes from the southeast.[4] The Chickasaw, Choctaw, Muscogee-Creek, Seminole, and original Cherokee Nations—referred to as the "Five Civilized Tribes" by Anglo-European settlers in reference to the tribes' adoption of aspects of colonial culture—had been established as autonomous nations in the southeastern United States.

This acculturation (originally proposed by George Washington) was well under way among the Cherokee and Choctaw by the turn of the 19th century.[5] In an effort to assimilate with white American culture, Native peoples were encouraged to "convert to Christianity; learn to speak and read English; and adopt European-style economic practices such as the individual ownership of land and other property (including, in some instances, the ownership of African slaves)."[6] Thomas Jefferson's policy echoed Washington's proposition: respect the Native Americans' rights to their homelands, and allow the Five Tribes to remain east of the Mississippi provided they adopt Anglo-European behavior and cultural practices. Jefferson encouraged practicing an agriculture-based society. However, Andrew Jackson sought to renew a policy of political and military action for the removal of the Native Americans from these lands and worked toward enacting a law for Indian removal.[7][8] In his 1829 State of the Union address, Jackson called for removal.[9]

The Indian Removal Act was put in place to give to the southern states the land that Indians had settled on. Although the act was passed in 1830, dialogue between Georgia and the federal government concerning such an event had been ongoing since 1802. Davis states in his article that, "the federal government had promised Georgia that it would extinguish Indian title within the state's borders by purchase 'as soon as such purchase could be made upon reasonable terms'".[10] As time had passed, southern states began to speed up the process by posing the argument that the deal between Georgia and the federal government had no contract and that southern states could pass the law themselves. This scheme forced the national government to pass the Indian Removal Act on May 28, 1830, in which President Jackson agreed to divide the United States territory west of the Mississippi into districts for tribes to replace the land they were removed from. President Jackson promised this land would be owned by the Indians forever. The Indian Removal Act brought many issues to the table, such as whether it was constitutional; who had the authority to pass what; and could the sovereignty of Indians be protected as was promised.

In the 1823 case of Johnson v. M'Intosh, the United States Supreme Court handed down a decision which stated that Indians could occupy lands within the United States, but could not hold title to those lands.[11] Jackson, as was common before the American Civil War, viewed the union as a federation of sovereign states. He opposed Washington's policy of establishing treaties with Indian tribes as if they were foreign nations. Thus, the creation of Indian jurisdictions was a violation of state sovereignty under Article IV, Section 3 of the Constitution. As Jackson saw it, either Indians comprised sovereign states (which violated the Constitution) or they are subject to the laws of existing states of the Union. Jackson urged Indians to assimilate and obey state laws. Further, he believed he could only accommodate the desire for Indian self-rule in federal territories, which he deemed required resettlement west of the Mississippi River on federal lands.[12][13]

The Removal Act was strongly supported by non-native people in the South, who were eager to gain access to lands inhabited by the Five Civilized Tribes. In particular, Georgia, which, in 1802 was the largest state (with claimed territory from the Atlantic Ocean to the Mississippi), was involved in a contentious jurisdictional dispute with the Cherokee. President Jackson hoped removal would resolve the Georgia crisis.[14] Besides the Five Civilized Tribes, additional peoples affected included the Wyandot, the Kickapoo, the Potowatomi, the Shawnee, and the Lenape.[citation needed]

The Indian Removal Act was controversial. While many European Americans during this time favored its passage, there was significant opposition. Many Christian missionaries, most notably missionary organizer Jeremiah Evarts, protested against passage of the Act. In Congress, New Jersey Senator Theodore Frelinghuysen and Tennessee Congressman Davy Crockett spoke out against the legislation. The Removal Act passed only after bitter debate in Congress.[15]

Jackson viewed the demise of Indian tribal nations as inevitable, pointing to the advancement of settled life and demise of tribal nations in the American northeast. He called his northern critics hypocrites, given the North's history: Indian tribes had been driven to extinction; Indian hunting grounds had been replaced with family farms; and state law had replaced tribal law. If the Indians of the south were to survive and their culture maintained, they faced powerful historical forces that could only be postponed. He dismissed romantic portrayals of lost Indian culture as a sentimental longing for a simpler time in the past, stating: "...progress requires moving forward."[16]

″Humanity has often wept over the fate of the aborigines of this country and philanthropy has long been busily employed in devising means to avert it, but its progress has never for a moment been arrested, and one by one have many powerful tribes disappeared from the earth. … But true philanthropy reconciles the mind to these vicissitudes as it does to the extinction of one generation to make room for another. ... Philanthropy could not wish to see this continent restored to the condition in which it was found by our forefathers. What good man would prefer a country covered with forests and ranged by a few thousand savages to our extensive Republic, studded with cities, towns, and prosperous farms, embellished with all the improvements which art can devise or industry execute, occupied by more than 12,000,000 happy people, and filled with all the blessings of liberty, civilization, and religion?″[17][18]

Jackson, according to historian H. W. Brands, sincerely believed his population transfer was a "wise and humane policy" that would save the Indians from "utter annihilation". Brands writes that given the "racist realities of the time, Jackson was almost certainly correct in contending that for the Cherokees to remain in Georgia risked their extinction". Jackson portrayed his paternalism and federal support as a generous act of mercy.[16] 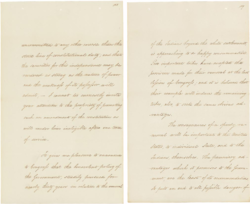 While Native American removal was in theory voluntary, in practice great pressure was put on Native American leaders to sign removal treaties. Most observers, whether they were in favor of the Indian removal policy or not, realized that the passage of the act meant the inevitable removal of most Indians from the states. Some Native American leaders who had previously resisted removal now began to reconsider their positions, especially after Jackson's landslide re-election in 1832.

The Removal Act paved the way for the forced expulsion of tens of thousands of American Indians from their traditional homelands to the West, an event widely known as the "Trail of Tears," a forced resettlement of the native population.[21][22][23][24] The first removal treaty signed was the Treaty of Dancing Rabbit Creek on September 27, 1830, in which Choctaws in Mississippi ceded land east of the river in exchange for payment and land in the West. The Treaty of New Echota, signed in 1835, resulted in the removal of the Cherokee on the Trail of Tears.

The Seminoles and other tribes did not leave peacefully. Along with fugitive slaves they resisted the removal. The Second Seminole War lasted from 1835 to 1842 and resulted in the government allowing the Seminoles to remain in the south Florida swamplands. Only a small number remained, and around 3,000 were killed in the war between American soldiers and Seminoles.[25]