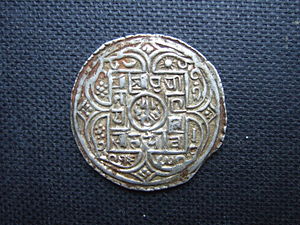 The Indian national calendar, sometimes called the Saka calendar, is the official civil calendar in use in India. It is used, alongside the Gregorian calendar, by The Gazette of India, in news broadcasts by All India Radio and in calendars and communications issued by the Government of India.[1] The Saka calendar is also used in Java and Bali among Indonesian Hindus. Nyepi, the "Day of Silence", is a celebration of the Saka new year in Bali. Nepal's Nepal Sambat evolved from the Saka calendar.

The term may also ambiguously refer to the Hindu calendar; the Saka era is also commonly used by other calendars.

The calendar months follow the signs of the tropical zodiac rather than the sidereal zodiac normally used with Hindu calendar.

In leap years, Chaitra has 31 days and starts on March 21 instead. The months in the first half of the year all have 31 days, to take into account the slower movement of the sun across the ecliptic at this time.

The names of the months are derived from older, Hindu lunisolar calendars, so variations in spelling exist, and there is a possible source of confusion as to what calendar a date belongs to.

The calendar was introduced from Nepal Sambat by the Calendar Reform Committee in 1957, as part of the Indian Ephemeris and Nautical Almanac, which also contained other astronomical data, as well as timings and formulae for preparing Hindu religious calendars, in an attempt to harmonise this practice.[citation needed] Despite this effort, local variations based on older sources such as the Surya Siddhanta may still exist.[citation needed]

Senior Indian Astrophysicist Meghnad Saha was the head of the Calendar Reform Committee under the aegis of the Council of Scientific and Industrial Research. Other members of the Committee were: A. C. Banerjee, K. K. Daftari, J. S. Karandikar, Gorakh Prasad, R. V. Vaidya and N. C. Lahiri. It was Saha’s effort, which led to the formation of the Committee. The task before the Committee was to prepare an accurate calendar based on scientific study, which could be adopted uniformly throughout India. It was a mammoth task. The Committee had to undertake a detailed study of different calendars prevalent in different parts of the country. There were thirty different calendars. The task was further complicated by the fact that religion and local sentiments were integral to those calendars. India's first prime minister, Jawaharlal Nehru, in his preface to the Report of the Committee, published in 1955, wrote: “They (different calendars) represent past political divisions in the country…. Now that we have attained Independence, it is obviously desirable that there should be a certain uniformity in the calendar for our civic, social, and other purposes, and this should be done on a scientific approach to this problem.” [2]

Usage started officially at Chaitra 1, 1879, Saka Era, or March 22, 1957. However, government officials seem to largely ignore the New Year's Day of this calendar in favour of the religious calendar.[3] It was a futile exercise, as no one accepted it for either religious or official purposes.