From Infogalactic: the planetary knowledge core
Jump to: navigation, search
This article is about the Pennsylvania borough. For other uses, see Indiana, Pennsylvania (disambiguation).

The borough and the region as a whole promotes itself as the "Christmas Tree Capital of the World" because the national Christmas Tree Grower's Association was founded there. There are still a large number of Christmas tree farms in the area. The largest employer in the borough today is Indiana University of Pennsylvania, the largest of 14 PASSHE schools in the state.[3]

The Indiana Weekly Messenger was published in the town between 1874 and 1946.[4]

For decades the major industry of the town was coal mining, but as mines closed throughout the latter half of the twentieth century the area has had ongoing economic difficulty. Natural gas surveying and production have picked up some of the slack, and Indiana serves as the home of the largest privately owned drilling company in the United States, S.W. Jack Drilling Company. It also counts a number of other production and service firms as members of the community, as well as three publicly traded companies: S&T Bancorp, Inc., First Commonwealth Financial Corporation, and Superior Well Services Inc.- unique considering the size of the community. In addition it holds one of the nation's largest independent insurance agencies: The Reschini Group - which was started by the nation's first female insurance agent Rose Reschini in 1938.

A large section of the southern part of the town, and bordering the university is occupied by Kovalchick Salvage Co. The land was recently purchased by the university and it plans to rejuvenate part of what is considered the largest eyesore in the community. Kovalchick holds large amounts of railroad salvage and aluminum.

As of December 2008, roughly fifty percent of the salvage materials held by Kovalchick Corporation have been cleared or otherwise removed from publicly viewable land. 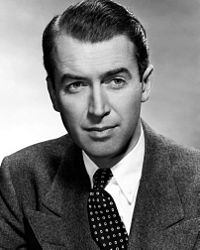 Indiana was the birthplace and hometown of actor Jimmy Stewart (1908–1997),[6] who was born there and lived at 104 North 7th Street. Despite the fact that he left the area upon graduating from high school, the town always followed his career closely, with the local newspaper periodically publishing rumors in his later years that Stewart planned to return there to live. On May 20, 1983, Stewart was given a 75th birthday celebration by the town. Before Stewart's death, a museum to his memory was opened on the third floor of the local public library, and a bronze statue of Stewart was erected in his honor at the county courthouse during his 75th birthday. The town annually holds a Jimmy Stewart film festival as part of the town's "It's a Wonderful Life" holiday celebration.

File:JimmyStewartStatute.jpg
Statute of James Stewart on the grounds of the Indiana County Courthouse.

Arguably the most celebrated and notorious environmentalist author of the twentieth century, Edward Abbey (1927–1989), was born at the Indiana hospital and raised in Indiana and near the Indiana County towns and villages of Saltsburg, Pennsylvania, Tanoma, and Home, Pennsylvania. Abbey's first novel, Jonathan Troy (1954), is set entirely in a thinly disguised Indiana, and his novel The Fool's Progress (1988), which he called his "fat masterpiece", is an autobiographical account of his growing up in this area and his imagined attempt to return home after a lifetime spent mostly in the desert Southwest. His nonfiction book Appalachian Wilderness (1970) lovingly describes Indiana and Home. There is a Pennsylvania state historical marker for Abbey at Home.

Indiana, Pennsylvania is located at Lua error in Module:Coordinates at line 668: callParserFunction: function "#coordinates" was not found. (40.6211, -79.1549).[7] The borough is an independent municipality surrounded by White Township. For some time in the 1990s there was discussion of merging the borough and township, but the matter was never acted upon.

According to the United States Census Bureau, the borough has a total area of 1.8 square miles (4.7 km2), all of it land.

Indiana University of Pennsylvania (or IUP) is a public university founded in 1875. It offers over 100 undergraduate majors and is the only doctoral degree-granting institution in the system.

Early care and education programs for pre-k children are available. The non-profit IndiKids [2] or (Indiana County Child Day Care Centers) offers NAEYC-accredited care for children of students and community members on the campus of IUP and throughout the community.

Indiana, Pennsylvania, is also home to the Indiana Gazette, formerly the Indiana Evening Gazette, a seven-day-a-week publication. Although Indiana County is considered to be part of the Pittsburgh DMA by Nielsen, many area residents view the Johnstown TV stations. The area receives coverage from both media markets.