As state militia units, the units in the Indiana Air National Guard are not in the normal United States Air Force chain of command. They are under the jurisdiction of the Governor of Indiana though the office of the Indiana Adjutant General unless they are federalized by order of the President of the United States. The Indiana Air National Guard is headquartered at Stout Field, Indianapolis, and its commander is Major General R. Martin Umbarger.

Under the "Total Force" concept, Indiana Air National Guard units are considered to be Air Reserve Components (ARC) of the United States Air Force (USAF). Indiana ANG units are trained and equipped by the Air Force and are operationally gained by a Major Command of the USAF if federalized. In addition, the Indiana Air National Guard forces are assigned to Air Expeditionary Forces and are subject to deployment tasking orders along with their active duty and Air Force Reserve counterparts in their assigned cycle deployment window.

Along with their federal reserve obligations, as state militia units the elements of the Indiana ANG are subject to being activated by order of the Governor to provide protection of life and property, and preserve peace, order and public safety. State missions include disaster relief in times of earthquakes, hurricanes, floods and forest fires, search and rescue, protection of vital public services, and support to civil defense.

The Militia Act of 1903 established the present National Guard system, units raised by the states but paid for by the Federal Government, liable for immediate state service. If federalized by Presidential order, they fall under the regular military chain of command. On 1 June 1920, the Militia Bureau issued Circular No.1 on organization of National Guard air units.[1] 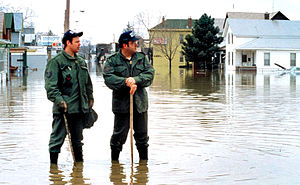 Members of the Indiana Air National Guard participate in an emergency operation after recent flooding in Fort Wayne, Indiana, March 1, 1982.

The modern Indiana ANG received federal recognition on 9 December 1946 as the 113th Fighter Squadron at Stout Field, Indianapolis. It was equipped with F-51D Mustangs and its mission was the air defense of the state. It was assigned to the 122d Fighter Group, also federally recognized on 9 December at Stout Field. 18 September 1947, however, is considered the Indiana Air National Guard's official birth concurrent with the establishment of the United States Air Force as a separate branch of the United States military under the National Security Act.[2]

A second squadron, the 163d Fighter Squadron, was federally recognized and activated on 10 November 1947 at Baer Field, Fort Wayne. It was assigned to the 122d Fighter Group and also was equipped with F-51D Mutangs.

Indiana Air Guard units were mobilized and served during the Korean War of the early 1950s and the Berlin Crisis of 1961. Personnel from four Army Guard and four Air Guard units from Indiana were called into federal service in support of the 1991 Gulf War in the Middle East.[3]

With the advent of the Jet Age and the ANG converting from the World War II piston-powered F-51 to more modern aircraft, Stout Field was unable to safely operate with jets due to its short runways. After the unit was returned to Indiana state control, In 1954, aircraft operations at Stout Field were moved from Indianapolis to Baer Field, Fort Wayne, Headquarters of the Indiana ANG, however remained in Indianapolis, where it remains to this day.

On 1 October 1962, the 113th Tactical Fighter Squadron was authorized to expand to a group level, and the 181st Tactical Fighter Group was established by the National Guard Bureau. The 113th TFS becoming the group's flying squadron.

After the September 11th, 2001 terrorist attacks on the United States, elements of every Air National Guard unit in Indiana has been activated in support of the Global War on Terrorism. Flight crews, aircraft maintenance personnel, communications technicians, air controllers and air security personnel were engaged in Operation Noble Eagle air defense overflights of major United States cities. Also, Indiana ANG units have been deployed overseas as part of Operation Enduring Freedom in Afghanistan and Operation Iraqi Freedom in Iraq as well as other locations as directed.