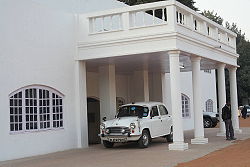 Indira Gandhi National Centre for the Arts, New Delhi (IGNCA) ( Devanagari: इन्दिरा गांधी राष्ट्रीय कला केन्द्र) is a premier government-funded arts organization in India. It is an autonomous institution under the Union Ministry of Culture. It was established in the memory of Indira Gandhi, the late Indian Prime Minister, with Kapila Vatsyayan as its founding director.[1]

The IGNCA was launched on 19 November 1985 by the late Prime Minister Shri Rajiv Gandhi at a function where the symbolism of the components was clearly articulated at different levels. The elements - fire, water, earth, sky and vegetation - were brought together. Five rocks from five major rivers - Sindhu (Indus), Ganga, Kaveri, Mahanadi and the Narmada (where the most ancient ammonite fossils are found) were composed into sculptural forms. These remain at the site as reminders of the antiquity of Indian culture and the sacredness of her rivers and rocks. In a simulated pool, the first of the principles of vegetation, the lotus bloomed. Rajiv Gandhi floated lighted lamps on the water at the inauguration. The Indira Gandhi National Centre for the Arts Trust was constituted and registered at New Delhi on 24 March 1987.

The Indira Gandhi National Centre for the Arts, established in memory of Smt. Indira Gandhi, is visualised as a centre encompassing the study and experience of all the arts—each form with its own integrity, yet within a dimension of mutual interdependence, interrelated with nature, social structure and cosmology.

This view of the arts, integrated with, and essential to the larger matrix of human culture, is predicated upon Smt. Gandhi's recognition of the role of the arts as essential to the integral quality of person, at home with himself and society. It partakes of the holistic worldview so powerfully articulated throughout Indian tradition, and emphasized by modern Indian leaders from Mahatma Gandhi to Rabindranath Tagore.

The arts are here understood to comprise the fields of creative and critical literature, written and oral; the visual arts, ranging from architecture, sculpture, painting and graphics to general material culture, photography and film; the performing arts of music, dance and theatre in their broadest connotation; and all else in fairs, festivals and lifestyle that has an artistic dimension. In its initial stages the Centre will focus attention on India; it will later expand its horizons to other civilizations and cultures. Through diverse programmes of research, publication, training, creative activities and performance, the IGNCA seeks to place the arts within the context of the natural and human environment. The fundamental approach of the Centre is all its work will be both multidisciplinary and interdisciplinary.

Recognizing the need to encompass and preserve the distributed fragments of Indian art and culture, a pioneering attempt has been made by Indira Gandhi National Centre for the Arts (IGNCA) to serve as a major resource centre for the arts, especially written, oral and visual materials. One of the programmes of this centre, in collaboration with UNDP, is to utilize multimedia computer technology to create a wide variety of software packages that communicate cultural information. Multimedia technology allows the user to interact and explore the subject in a non-linear mode by combining audio, text, graphics, animation and video on a computer.

Its official goals are: