Indochina, or the Indochinese Peninsula (also known as Mainland Southeast Asia), refers to the continental portion of Southeast Asia[1] lying east of India and roughly south or southwest of China. The historical name "Indochina" has its origins in the French Indochine, a combination of the names of "India" and "China", referring to the location of the territory between those two countries.

The countries of mainland Southeast Asia received cultural influence from both India and China to varying degrees.[1] Some cultures, such as those of Cambodia, Laos, Thailand and Malaysia are influenced mainly by India with a smaller influence from China. Others, such as Vietnam, are more heavily influenced by Chinese culture with only minor cultural influences from India, largely via the Champa civilization that Vietnam conquered during its southward expansion.

The region experienced colonial rule through the 19th century into the mid-20th century with French Indochina as well as British India. 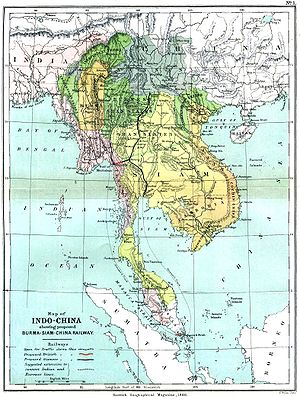 The territories of mainland southeast Asia comprise the following:

In biogeography the term Indochinese Region is used to mean a major biogeographical region in the Indomalaya ecozone, and also a phytogeographical floristic region in the Paleotropical Kingdom. It includes the native flora and fauna of all the countries above. The adjacent Malesian region covers the maritime Southeast Asian countries, and straddles the Indomalaya and Australasian ecozones.