Indonesia and Malaysia are two neighbouring nations that shared similarities in many aspects.[2] Both Malaysia and Indonesia have many common characteristic traits, these include common frames of reference in history, culture and religion. Although both countries are separate and independent states, there are also deeply embedded similarities.[3] Their national languages; Indonesian language and Malaysian language are closely related and mutually intelligible, both being standardised registers of Malay. The majority of the population of both nations were of Austronesian ancestry or of the Malay race, with significant Malay culture shared among them. Both nations are Muslim majority countries, the founding members of ASEAN and APEC, and also members of the Non-aligned Movement, Developing 8 Countries and Organisation of Islamic Cooperation.

Despite sharing so many similarities, tied by common religion, language, proximity and a cultural heritage that dates back centuries, both nations have been lurching from one diplomatic spat to another.[4] Since independence Indonesia and Malaysia have moved in different directions in their social, economic, and political development, leading at times to serious bilateral tensions.[5] The unequal pace of democratisation in the two countries over last decades has made the relationship increasingly problematic. Malaysian government-controlled media has been restrained in reporting sensitive issues involving Indonesia, on the other hand Indonesia's liberal mass media has played a key role in inflaming the tension.[1] 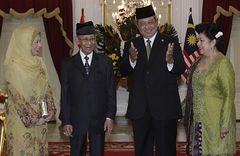 The History of Indonesia and History of Malaysia were often intertwined. Throughout their history the borders of ancient kingdoms and empires — such as Srivijaya, Majapahit, Malacca, Aceh and Johor-Riau — often comprised both modern day countries. For centuries, the relations, migrations and interactions between Indonesian and Malaysian people have been quite intense, and it is common for Malaysians to trace their relatives in Indonesia and vice versa. The Malays' homes are on both sides of the strait and also on coastal Borneo, while Dayak homelands are both in East Malaysian Borneo and Indonesian Kalimantan. Some of Indonesian origin ethnic groups such as Minang, Bugis, and Javanese had significant migration to Malaysia and formed significant communities in Malaysia. Negeri Sembilan in particular have large numbers of Minangkabau people.

During the colonial era, the region was contested among European colonial powers, notably British and Dutch. From the 17th to early 19th century, various states, ports and cities in the region were held as Dutch colonies or British possessions. The current borders between Indonesia and Malaysia were basically inherited from those established by the colonial powers through their treaties. The Anglo-Dutch Treaty of 1814 and 1824 significantly shaped the territories of Indonesia, Malaysia, Singapore, and India. These treaties officially divided the archipelago into two: Malaya, which was ruled by the United Kingdom, and the Dutch East Indies, which was ruled by the Netherlands. The successor states of Malaya and the Dutch East Indies are Malaysia and Indonesia, respectively. The line that separated the spheres of influence between the British and the Dutch ultimately became the border between Indonesia and Malaysia.

During World War II both British Malaya and Borneo together with the Dutch East Indies fell to the Japanese Empire. After the Japanese defeat, Indonesia declared its independence in 1945, followed a war of independence against Dutch until 1949. The British reestablished their authority in Malaya, and their withdrawal two decades later meant the independence of the states of Malaysia, Singapore, and Brunei. The diplomatic relations between the Republic of Indonesia and Federation of Malaya were established promptly after Malaya's independence from Britain in 1957.[9]

However, the relations between the two nations deteriorated under Indonesian President Sukarno in 1962 (see Indonesia–Malaysia confrontation, see Indonesian withdrawal from the United Nations). The conflict resulted from Indonesian opposition to the formation of Malaysia, a merger of the Federation of Malaya with two former British colonies on Borneo: Sarawak and Sabah. The conflict has led to the termination of diplomatic relations on 17 September 1963.[9]

After the fall of Sukarno, relations between Indonesia and Malaysia were restored under President Suharto; as both parties agreed to normalise the bilateral relationship and pursued peaceful co-operation and partnership. The bilateral relations recovery process was started on 1 June 1966 when the foreign ministers of two nations signed the Bangkok Accord to end hostility and confrontation. Followed by Jakarta Accord signed on 11 August 1966 in Jakarta, marked the re-establishment of bilateral relations. In September 1967 Indonesian Liaison Office was opened in Kuala Lumpur, led to establishment of Indonesian embassy.[9]

In 1967, both countries together with Philippines, Singapore and Thailand founded ASEAN to ensure the peace and stability in the region. Since the 1970s under Suharto and Mahathir administrations, both countries enjoys relatively cordial and close relationship, stemmed from both proximity and serumpun (kinship) spirit. However, some diplomatic spats have occurred that at times put tensions on bilateral relations. These range from territorial disputes, treatment of migrant workers to accusations of cultural theft.

Most of the current borders were inherited from Dutch East Indies and British Malaya and Borneo colonial rule. Currently, both nations are in a territorial dispute over the oil rich islands of Ambalat. Previously, they were over territorial disputes over the islands of Ligitan and Sipadan, which were won by Malaysia.[10]

The recent border disputes arisen in Straits of Malacca and South China Sea area mainly because the disagreement on exact locations of maritime naval borders in these waters. Both parties involved in arresting and detaining their counterpart's officials and fishermen accused on territorial breaching violations and illegal fishing.[11][12]

The Indonesian migrant worker (Indonesian: TKI abbreviation of Tenaga Kerja Indonesia) has become the important issue between both countries. In the 1980s to 1990s Malaysia saw the remarkable growth and development on economy, industrialisation and modernisation. With its large population and large workforce, Indonesian jobseekers suddenly began to regard Malaysia as an attractive destination for work and improving their economic situation. In 1997 both Indonesia and Malaysia were hit by the financial crisis that prompted the fall of the Suharto regime. Indonesian suffered the worst, large amounts of Indonesians lost their jobs and a large influx of Indonesian jobseeker migrant workers began to pour into Malaysia, which in return caused social problems in Malaysia, such as competition for jobs, crime and poverty.

The problems plaguing Indonesian migrant workers such as illegal immigration, crime, human trafficking, abuse, poor treatment and extortion upon migrant workers. Approximately 300,000 domestic workers, most of them from Indonesia, are employed in Malaysia. Many work up to 18 hours a day, seven days a week, for wages of 400 to 600 ringgit (US$118–177) a month and typically must turn over the first six to seven months of their salary to repay exorbitant recruitment fees. Some suffer physical or sexual violence from employers.[13] Since 2009 Indonesia has temporarily stopped sending domestic workers to Malaysia until both countries agree on ways to protect them.[14] Indonesia resume sending migrant workers to Malaysia in May 2011 as both countries sign a memorandum of understanding (MoU) about worker protection by the end of April 2011.[15]

Because of many similarities and shared cultures between Indonesia and Malaysia—also because of significant numbers of Indonesian-origin immigrants in today's Malaysian demographic—both countries are often involved in disputes over cultural claims of the origin. Through an intensive tourism campaign, Malaysia has featured some famous cultural icons, namely the song Rasa Sayange, batik, shadow puppet theater and barongan (reog) dance.[16] This aggressive tourism promotion and cultural campaigns had alarmed and upset Indonesians that always thought that these arts and cultures belongs to them. As the reaction, many Indonesians felt the need to safeguard their cultural legacies, and to the extreme developed the anti-Malaysia sentiments. In 2009 the Pendet controversy fuelled again the cultural disputes among neighbours.[17] The advertisement promoting Discovery Channel's programme "Enigmatic Malaysia" featured Balinese Pendet dancer which it incorrectly showed to be a Malaysian dance.[18][19][20]

Disputes over the origins of a variety of dishes found in both countries is also a perpetual issue, from rendang[17] to lumpia (popiah). The claims to an extent also overlap with neighbouring Singapore. Despite the dispute never leading to a serious confrontation between the two countries, and politicians of both sides having even acknowledged it as "petty", in Indonesia however, an activist group held a demonstration in front of the Malaysian Embassy in Jakarta to protest the origin of the dish, lumpia in February 2015.[21]

In addition, the two nations are fierce rivals in the world of international football (soccer). Competitive matches between the two countries are famed for their immense turnout and intense atmosphere, whether the tie is in Malaysia or Indonesia.

The slash and burn practice to clear the lands for palm plantations in Sumatra and Kalimantan were causing haze and smoke fog that blown northwards by wind and had reached Malaysia and Singapore. The haze occur in 1997, 2005, 2006, and reached the highest haze pollutant levels in June 2013.[24]

The haze is clearly hazardous for health and dangerous for transportation, especially flight safety in the region. The trans-border haze problems has strained diplomatic relations between Indonesia and Malaysia, and also with Singapore. Malaysian and Singaporean government had noted their protest and urged Indonesian government to reduce the hot-spots. In the peak of the haze that usually occur during dry season, Malaysian and Singaporean offer assistance to put off the fires. Indonesian government had banned the slash and burn practice, however the method was still widely used to clear palm oil plantation lands.

Another important environment issue is transborder illegal logging. Indonesian government has expressed the concern that many rainforest along Indonesia—Malaysia borders in Borneo were suffering illegal loggings, mostly done by Malaysian loggers. The concern was arroused because Malaysian authorities seem to be doing nothing to prevent the crime and even seems to be encouraging this practice to increase Malaysian timber yield.

Malaysians expressed their concern that media in Indonesia seems to encouraging and fostering the anti-Malaysia sentiments through distorted news coverages, exaggerations and blowing the issues beyond the proportions.[25] Malaysian government concerned about anti-Malaysia sentiments, protest and aggressive actions of certain extremists amids the bilateral spats over a Balinese dance and the mistreatment of Indonesian housemaids in Malaysia.[26] Malaysia government also stated had run out of patience and sent a protest letter to Indonesia after a demonstration triggered by a maritime dispute.[27]

Malaysian companies that are investing in Indonesia are Maybank, CIMB, Petronas, Tabung Haji and Sime Darby, as stated by the Yang di-Pertuan Agong in his message to Malaysians in Indonesia while he and the Raja Permaisuri Agong were on a state visit to Indonesia in December 2012.[31] Both countries are actively pursuing subregional economic co-operation to develop trans-border economic zones and free-trade areas that could generate regional economy, such as Sijori (Singapore-Johor-Riau) on the west and BIMP-EAGA on the east region. 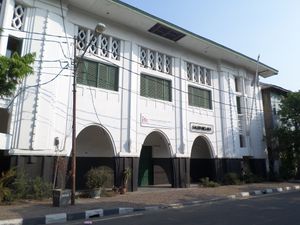 Because of their proximity, travellers from both countries are important source of visitors that generated travel and tourism industry. Indonesians are the second largest visitors for Malaysia, reaching 2,548,021 visitors in 2013.[32] On the other hand, Malaysians are also the second largest visitors for Indonesia, reaching 1,302,237 travellers in 2011.[33] The top visitors of both countries are Singaporean visitors. Kuala Lumpur, Malacca and Penang are popular destinations for Indonesian travellers, and vice versa Bandung, Medan and Bukittinggi are particularly popular among Malaysian tourist.