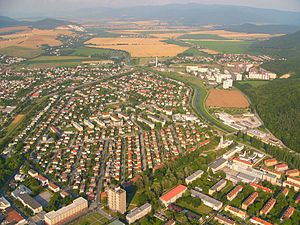 Partizánske in Slovakia – an example of a typical planned industrial city founded in 1938 together with a shoemaking factory in which practically all adult inhabitants of the city were employed.

Industrial district was initially introduced as a term to describe an area where workers of a monolithic heavy industry (ship-building, coal mining, steel, ceramics, etc.) live within walking-distance of their places of work.

In England, such areas were usually characterized by block streets of Victorian terraced housing, often with the giant industrial structures looming over the houses. Very few working industrial districts are now left. In England they survive only in places like Stoke-on-Trent and a few mining towns where the pits have escaped the closures of the 1980s. Many such districts were notable for having a strong children's street culture. 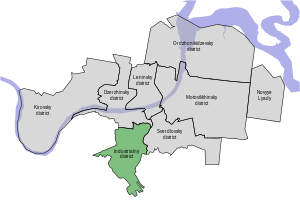 The term was used by Alfred Marshall in his The Principles of Economics (1890, 1922).[1] Marshall talks of a.... "thickly peopled industrial district".

The term was also used in political struggle. The 1917 handbook of the IWW states:-

The term also appears in English literature. For instance, in a short story of 1920 by D. H. Lawrence, You Touched Me (aka 'Hadrian'):-

"Matilda and Emmie were already old maids. In a thorough industrial district, it is not easy for the girls who have expectations above the common to find husbands. The ugly industrial town was full of men, young men who were ready to marry. But they were all colliers or pottery-hands, mere workmen."

Recent evolution of the use of the term

Within the study of economics, the term has evolved and now implies the ways in which economic specialisation arises through clustering in a particular industry-zoned urban area. Since the 1980s, the term has become connotated with an important element of dynamic industrial development in Central and Northeastern Italy, where after the Second World War clusters of small and medium-sized enterprises (SME) experienced strong growth. Industrial districts in Central and Northeastern Italy have a coherent location and a narrow specialisation profile, e.g. Prato in woolen fabric, Sassuolo in ceramic tiles or Brenta in ladies' footwear.

The success of SME-based Italian districts was one of the many factors that motivated economic development organisations across the world to adopt cluster promotion as an approach to stimulate growth and job creation. More recently, Italian industrial districts have been linked to Italy's poor growth performance. Firms in industrial districts battle to internationalise production, and they have only limited resources to invest in research and development.[citation needed]