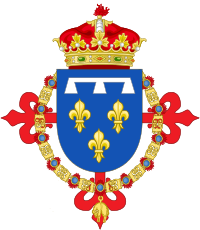 Arms of Alfonso of Orléans as Infante of Spain.

Alfonso was born in Madrid, Spain, the elder son of Infante Antonio, Duke of Galliera and his wife, Infanta Eulalia of Spain.[1] On his paternal side he was a grandson of Antoine, Duke of Montpensier, while on his maternal side he was a grandson of Queen Isabella II of Spain. On 30 November 1886, in the Royal Palace of Madrid, he was baptised with the names Alfonso María Francisco Antonio Diego.[2]

In 1899 Alfonso and his younger brother Luis Fernando were sent to England to be educated by the Jesuits at Beaumont College.[3] They remained there until 1904.

In 1906 Alfonso graduated from the Academia Militar de Toledo (Military Academy of Toledo). In 1910 he trained as a pilot in France. Upon returning to Spain, be successfully become one of the first and most distinguished aviators in the Spanish military. He served as chief of aerial operations for the 1925 amphibious landings at Al Hoceima in Morocco.

In May 1930 Alfonso was a passenger on the Graf Zeppelin flight from Seville to Brazil.[4] He then continued in the Graf Zeppelin to New York City and visited President Herbert Hoover in Washington, D.C., before returning to Spain.

On 27 February 1931, Alfonso was named Chief of Staff of the Spanish Air Force and Commander of the First Aero District by his cousin King Alfonso XIII.[5]

After the founding of the Second Spanish Republic on 14 April 1931, Alfonso was exiled to London. When he returned to Spain in 1932, he was imprisoned at Villa Cisneros (now Dakhla, Western Sahara). On 1 January 1933, Alfonso and some thirty other monarchist prisoners escaped in a boat, travelling 1800 miles to Lisbon.[6]

In 1937 after the start of the Spanish Civil War Alfonso returned to Spain to head the aerial forces of General Francisco Franco. At the end of the war, he was promoted to general. He was made head of the Second Division Air Force in 1940. Three years later, he was promoted to brigadier general. 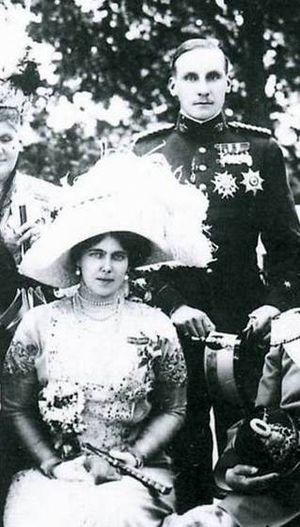 The New York Times reported that Alfonso did not have the permission of his cousin King Alfonso XIII of Spain to marry and that he had been "stripped of his Spanish honours and decorations".[9] Beatrice had been raised Protestant, and chose not to convert to Catholicism.[10] Several days after the marriage it was revealed that King Alfonso XIII had no personal objection to the marriage: indeed, he encouraged it and used his influence to obtain a dispensation so as to allow a Catholic ceremony. Nevertheless, the Spanish government insisted that the marriage of a Spanish infante to a Protestant could not receive official approval.[11]

Alfonso was removed from his regiment as a consequence of his marriage. The Times reported that he would also be "tried by a disciplinary council for marrying without the permission of the military authorities."[12]

Alfonso and Beatrice had three children:

In 1911 Alfonso was restored to the rank of lieutenant in the army. In 1912 King Alfonso XIII issued a decree restoring his title.[13]

In August 1913 Beatrice was received into the Catholic Church.[14]

In 1928 Alfonso visited North America accompanied by his wife and eldest son.[15] The visit was intended to be a preliminary to a visit by King Alfonso XIII which never occurred. On 13 November they arrived in New York City, where they stayed at the home of General Cornelius Vanderbilt III.[16] They were then the guests of Percy Rivington Pyne, II, at his country home in Roslyn, Long Island.[17] They proceeded to Philadelphia where they were the guests of Joseph E. Widener. Later they visited Washington, D.C. (where they met Vice President and Mrs. Charles G. Dawes), Boston, Montreal (where they met the Lieutenant Governor of Quebec, Narcisse Pérodeau), Detroit, and Niagara Falls. They left New York City and returned to Spain on 7 December.[18]

In 1975 Alfonso died of a heart attack at his palace in Sanlúcar de Barrameda.[19]

The Fundación Infante de Orleans, a foundation dedicated to the preservation of historical aircraft in Spain, established in 1989, is named in his honour.