Infantry of the British Army 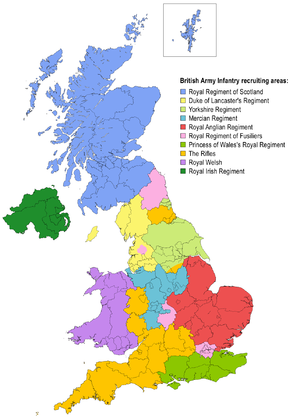 Traditionally, regiments that form the combat arms of the British Army (cavalry and infantry) recruit from specific areas of the country. Infantry regiments had been assigned specific areas from which they would recruit from by the mid eighteenth century. These were formalised under the Cardwell Reforms that began in the 1860s. Under this scheme, single battalion infantry regiments were amalgamated into two battalion regiments, then assigned to a depot and associated recruiting area (which would usually correspond to all or part of a county). The recruiting area (usually) would then become part of the regiment's title. It was this that gave rise to the concept of the "county regiment", with the local infantry regiment becoming part of the fabric of its local area.

Since September 2007, when the most recent reforms were completed, the infantry has consisted of 18 separate regiments. The five regiments of foot guards recruit from their respective home nations (with the exception of the Coldstream Guards, which recruits from the counties through which the regiment marched between Coldstream and London). Scotland, Ireland and Wales each have a single regiment of line infantry from which they recruit (though the battalions of the Royal Regiment of Scotland recruit from the areas they recruited from when they were separate regiments), while England has seven line infantry and rifles regiments. The Parachute Regiment recruits nationally, while the Royal Gurkha Rifles recruits most of its serving personnel from Nepal, and the Royal Gibraltar Regiment recruits from the UK and Commonwealth nations

Before the Second World War, infantry recruits were required to be at least 5 feet 2 inches (1.57 m) tall. They initially enlisted for seven years with the colours and a further five years with the reserve. They trained at their own regimental depot.[1]

Unlike the other trades in the army, which have separate units for basic training and specialised training, new recruits into the infantry undergo a single course at the Infantry Training Centre Catterick. This course, called the "Combat Infantryman's Course" (CIC), lasts 26 weeks as standard and teaches recruits both the basics of soldiering (Phase 1 training) and the specifics of soldiering in the infantry (Phase 2 training). On completion of the CIC, the newly qualified infantry soldier will then be posted to his battalion.[2]

For some infantry units, the CIC is longer, due to specific additional requirements for individual regiments:

New officers conduct their Phase 1 training at the Royal Military Academy Sandhurst. Phase 2 training for officers, which is encompassed by the Platoon Commander's Battle Course, is run at the Infantry Battle School at Brecon in Wales. It is here that leadership and tactics are taught to new platoon commanders. New NCOs and Warrant Officers are also sent on courses at Brecon when they come up for promotion. This encompasses Phase 3 training. Phase 3 training is also undertaken at the Support Weapons School at Warminster, where new officers, NCOs and soldiers are trained in the use of support weapons (mortars, anti-tank weapons) and in communications.

Headquarters Infantry, which is located at the Land Warfare Centre on Imber Road in Warminster, is responsible for recruiting, manning and training policy of the Infantry.[3]

The majority of the infantry in the British Army is divided for administrative purposes into five divisions. These are not the same as the ready and regenerative divisions (see below), but are based on either the geographical recruiting areas of the regiments, or the type of regiments:

A further division, the Light Division, grouped together the regiments of light infantry and rifles until they were amalgamated into a single regiment in 2007, while the Prince of Wales' Division will be merged with the Scottish Division in 2017 to become The Scottish, Welsh and Irish Division.

There are further infantry units in the army that are not grouped in the various divisions:

Within the British Army, there are four main types of infantry:

The infantry is traditionally divided into three types:

Battalions are attached permanently (semi-permanently for light role battalions) to formations. As of current:

This structure will alter due to the Army 2020 Refine initiative.

Delivering Security in a Changing World (2003)

HM Treasury asked for major cuts in the strength of the infantry in 2003, with at least ten battalions to be disbanded. This proved so unacceptable that, in November 2003, there was consideration to instead reducing each battalion to two rifle companies (with the third to come from the TA).[8] By March 2004, ECAB had shown that the maximum number of battalions it was possible to cut was four. This was finally officially announced as part of the army re-organisation. The arms plot system would be abolished; instead, individual battalions would be given fixed roles. To ensure that officers and men could continue to gain the variety of skills that the arms plot provided, the restructuring would also see a series of amalgamations of the remaining single battalion infantry regiments into large regiments. In addition, the regular army will lose four battalions. The roles are divided up as follows:

In addition to the army's infantry battalions, there are three further battalion-sized commando infantry units, which are part of the Royal Marines, as well as eight field squadrons (each larger than an infantry company) of the RAF Regiment, who have responsibility for the ground defence of air assets and are under the control of the Royal Air Force.

Each battalion in the five single battalion regiments of the Guards Division has a fixed role:

The six battalions of the Scottish Division have amalgamated into a single five battalion regiment to be called the Royal Regiment of Scotland.

The six battalions of the King's Division have amalgamated into two regiments;

The original seven battalions of the Prince of Wales's Division have been reduced to five with the transfer of the Devonshire and Dorset Regiment and the Royal Gloucestershire, Berkshire and Wiltshire Regiment to the Light Division. The five remaining battalions will amalgamate into two regiments;

The three existing large regiments of the Queen's Division remain unaffected by the restructuring.

With the exception of the Royal Gurkha Rifles, every line infantry regiment has at least one TA battalion (the Royal Regiment of Scotland and The Rifles have two). The Guards Division has The London Regiment as an affiliated TA battalion.

Following the 2010 General Election, the new government instituted a new defence review. The ultimate conclusion of this process was to reduce the size of the British Army from approximately 102,000 to approximately 82,000 by 2020. The detail of the process was subsequently announced as Army 2020 in July 2012. As part of this, the infantry was reduced in size from 36 regular battalions to 31. Of the five to be withdrawn, two were armoured infantry units, two general light infantry and one a specialist air assault infantry battalion. The withdrawal of two armoured infantry battalions is to bring this into line with the planned future operational structure, intended to see three "armoured infantry brigades", each with a pair of infantry battalions, forming the core of the Army's "reaction forces". These two battalions, along with the two light infantry battalions, will be disbanded and their personnel distributed among the remaining battalions of each regiment. The air assault battalion will be reduced to company strength, with the intention that it is assigned as a permanent public duties unit in Scotland.

The affected regiments were:

In addition, the Royal Irish Regiment (27th (Inniskilling), 83rd, 87th and Ulster Defence Regiment) was transferred to the administration of the Prince of Wales' Division.

Over time, a handful of infantry regiments have disappeared from the roll through disbandment rather than amalgamation. In the 20th Century, seven regiments disappeared like this:

Regiments that never were

Since the Cardwell reforms began, infantry regiments in the British Army have amalgamated on many occasions. However, there have been occasions where amalgamations have been announced, but have then been abandoned:

In recent years, there have been many depictions of the British Army of various periods in fiction. Two notable ones depicting the modern British Army have been Spearhead from the period of the late 1970s, and Soldier Soldier from the early to mid-1990s. Both are seen as reasonably accurate depictions of life in the army at those times, and both are centred on a fictional infantry regiment. The more recent depiction of the British Army came in the film The Mark of Cain, which featured an infantry regiment deployed to Iraq, and the difficulties it faced.

The Loamshire Regiment is used by the British Army as the placeholder name in the provision of examples for its procedures, for example in the method of addressing letters to members of the forces produced by the British Forces Post Office.