A depiction of a Napoleonic-era British infantry square at the Battle of Quatre Bras, Belgium, 1815.

Historically an infantry square, also known as a hollow square, is a combat formation an infantry unit forms in close order usually when threatened with cavalry attack.[1] With the development of modern firearms and the demise of cavalry this formation is now considered obsolete.

The formation was described by Plutarch[2] and used by the Romans, and was developed from an earlier circular formation.[citation needed] In particular, a large infantry square was utilized by the Roman legions at the Battle of Carrhae against Parthia, whose armies contained a large proportion of cavalry. This is not to be confused with the testudo formation, which also resembled a square, but was used for protection against ranged weapons such as arrows.[3]

The Han Empire's mounted infantry forces effectively utilized tactics involving highly mobile infantry square formations in conjunction with light cavalry in their many engagements against the primarily cavalry Xiongnu nomad armies in the 1st century AD. Infantry squares were used in the siege of the nomads' mountain settlements near the Gobi region, where Han forces repelled nomad lancer attacks.[citation needed]

The square was revived in the 14th century as the schiltron, and later appeared as the pike square or tercio, and was widely used in the French Revolutionary and Napoleonic Wars.[4] 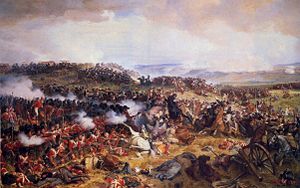 The charge of the French Cuirassiers at the Battle of Waterloo against a British square.

As used in the Napoleonic wars, the formation was constituted as a hollow square, or sometimes a rectangle, with each side composed of two or more ranks of soldiers armed with single-shot muskets or rifles with fixed bayonets. Generally, a battalion (approx. 500 to 1,000 men) was the smallest force used to form a square. The unit's colours and commander were positioned in the centre, along with a reserve force to reinforce any side of the square weakened by attacks. A square of 500 men in four ranks, such as those formed by Wellington's army at Waterloo, was a tight formation less than twenty metres in length upon any side.

Once formed in square, the infantry would volley fire at approaching cavalry, either by file or by rank. In successful actions, the infantry would often withhold fire until the charging horses and men were some 30 metres from the square; the resulting casualties to the attackers would eventually form piles of dead and wounded horses and their riders which would obstruct further attacks.

Undisciplined or early fire by the infantry would be ineffective against the attacking cavalry and leave the foot soldiers with empty muskets. The cavalrymen could then approach to very short range while the infantry was reloading, where they could fire at the infantry with their pistols, slash at them with sabres or stab them with lances (if they were so equipped.)

Firing too late (with cavalry within 20 metres), although more effective in hitting the targets, could result in a fatally wounded horse tumbling into the infantry ranks and creating a gap, permitting the surviving horsemen to enter the square and break it up from within.

While it was vital for squares to stand firm in the face of a charge, they were not static formations. Astute commanders could, in suitable terrain, manoeuvre squares to mass fire and even trap cavalry, as the French managed against the Ottomans at Mount Tabor (1799). Squares would be arranged in a checkerboard formation to minimize the chances of soldiers from one square accidentally shooting the other.

At Waterloo (1815) the four-rank squares of the Allied forces withstood eleven cavalry charges (unsupported by either horse artillery or infantry). At Lützen (1813), despite infantry and light artillery support, Allied cavalry charges failed to break green French troops. Similarly, impressive infantry efforts were seen at Jena-Auerstedt (1806), Pultusk (1806), Fuentes de Oñoro (1811) and first Battle of Krasnoi (August 14, 1812). If a square was broken, as happened at Rio Seco (1808), the infantry could suffer many casualties, although brave and well-disciplined infantry could recover even from this disaster.

Egyptian Mamluk cavalry charges a French infantry square during the Battle of the Pyramids, 1798.

Attacking cavalry would attempt to "break a square" by causing it to lose its cohesion, either by charging to induce poorly disciplined infantry to flee before making contact, or by causing casualties through close-range combat (see above).

Cavalry charges were made in closely packed formations, and were often aimed at the corners of the square (the weakest points of the formation.) Feints and false attacks would also be used to make the infantry "throw away their fire" by causing them to fire too early. However, if the infantrymen were well-disciplined and held their ground, the cavalryman's dream to "ride a square into red ruin" would not be realized, and such an event was the exception rather than the rule in the history of warfare.

However, the most effective way to break a square was not by direct cavalry attack, but by the use of artillery. To be truly effective, such artillery fire had to be delivered at close range. A 20-metre wide infantry square was a small and difficult target for field artillery firing from within or just in front of its own army's lines, typically 600 or more metres away, at which range most rounds could be expected to miss.

Instead, the attackers would usually try to deploy horse artillery accompanying the cavalry. The presence of the cavalry would cause the infantry to form square, but the closely packed infantrymen would then become targets for the artillery - the cohesion of the square would break under their fire, making it much easier for the cavalry to press home the attack.

Combined attacks by infantry and cavalry would also have the same effect - the defending infantry unit would be placed in the difficult position of either forming square and being shot to pieces by the attacking infantry (which would usually be in line formation), or being ridden down by the cavalry if it decided to remain in line while trading volleys with the attacking infantry.

In addition, if the cavalry could catch an infantry unit before it formed square properly, the horsemen could usually inflict severe casualties, if not destroy the unit completely. Quatre Bras (1815) saw several examples of this, with several British units being surprised at close range by French cavalry hidden by the terrain. Other circumstances that could lead to a successful cavalry attack included sudden rainstorms soaking the infantry's gunpowder and effectively reducing their weapons to very short pikes, or a mortally wounded horse in full gallop crashing into the square, opening a gap that could be exploited, as happened at the battle of Garcia Hernandez, shortly after Salamanca (1812).

The square continued in use into the late 19th century by European armies against irregular warriors in colonial actions. However, this was different in form from the Napoleonic formation:

"The new square was not simply infantry in static defence but a large, close-packed formation of some 1,000 to 1,500 men, capable of slow movement with ranks of infantry or cavalry forming the four sides and artillery, wheeled machine guns, transport carts, baggage animals and their handlers in the centre. Such a square could only survive where the enemy were without modern firearms."[5]

At the Battle of Custoza during the Third Italian War of Independence Italian bersaglieri formed squares at Villafranca to defend themselves from charging Austrian uhlans.[citation needed] 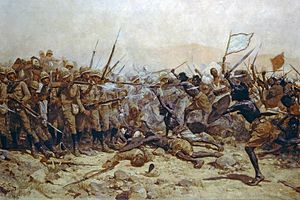 A depiction of the British square at the Battle of Abu Klea, Sudan, during the Mahdist War of the late 19th century.

In a large battle of the colonial wars, a British square held out for two days in a remote area near Lake Victoria, fighting off assaults by French-armed native troops until reinforcements arrived.

On 7 February 1857, during the Anglo-Persian War, Indian cavalry successfully attacked and broke a Persian square in the Battle of Khushab. Only twenty of the five hundred soldiers in the square escaped.

During the Anglo-Zulu War, after the Battle of Isandlwana where the Zulu nation's warriors overwhelmed the British colonial force's poorly fortified linear formation positioning, infantry squares were used in most major battles such as Gingindlovu and the climatic Battle of Ulundi to counter their enemy's massed charges.

Rudyard Kipling's poem "Fuzzy-Wuzzy" refers to two battles in the Mahdist War, Tamai in 1884 and Abu Klea in 1885, where infantry squares were used by the victorious British. While in both battles the squares were partially broken, British losses remained very low in comparison with the losses of the attacking Mahdists.

In 1936, during the Second Italo-Ethiopian War, the advancing Italians formed an infantry square to defend against a possible Ethiopian counter-attack in the Battle of Shire. No counter-attack was launched.[6]

Union Infantry during the US Civil War form in an infantry square with bayonets fixed, 1860s. 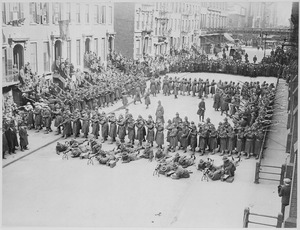 A battalion of the U.S. Army Coast Artillery Corps demonstrating the hollow square formation used in the event of a street riot, 1918.

On March 19, 1836, while on the retreat from Goliad following the fall of the Alamo, Texan Colonel James Fannin and his command of 300 men were intercepted by over 1,200 Mexican troops. The Texans formed square and repulsed three successive Mexican charges, but surrendered the following day when their supplies ran low. The prisoners were taken back to Goliad and executed on the orders of Antonio Lopez de Santa Anna.

During the American Civil War the infantry square was only used on a few occasions, the most notable of these being the Thirty-Second Indiana Volunteer Infantry at the Battle of Rowlett's Station, December 17, 1861 against Terry's Texas Rangers; a Colorado Volunteer company formed square when charged by lancers of the 5th Texas Mounted Rifles at the Battle of Valverde on February 21, 1862.[7]

On other occasions such as at the Battles of Gettysburg and Chickamauga cavalry units feinted as if preparing to charge, to force advancing infantry to halt their advance and form a square.[7]

In 1867, one of the first battles of the U.S. 10th Cavalry was the Battle of the Saline River. This battle occurred 25 miles northwest of Fort Hays in Kansas near the end of August 1867.[8] Captain George Armes, Company F, 10th Cavalry, while following an active trail along the Saline River were surrounded by about 400 horse-mounted Cheyenne warriors. Armes formed a defensive "hollow square" with the cavalry mounts in the middle. Seeking better defensive ground, Armes walked his command while maintaining the defensive square. After 8 hours of combat, 2,000 rounds of defensive fire and 15 miles of movement, the Cheyenne disengaged and withdrew. Company F, without reinforcements, concluded 113 miles of movement during the 30 hour patrol, riding the final 10 miles back to Fort Hays with only one trooper killed in action. Captain Armes commented later, "It is the greatest wonder in the world that my command escaped being massacred." Armes credited his officers for a "... devotion to duty and coolness under fire."[8][9][10]

In 1869, during the Paraguayan War in South America, the Paraguayan defenders formed a square towards the end of the Battle of Acosta Ñu. This square was formed too late and was broken by the Brazilian cavalry.

The square fell out of use in the late 19th century with the advent of modern repeating firearms (which made concentrated formations risky in the face of increased firepower), along with the parallel decline of horse cavalry.