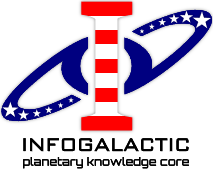 InfoGalactic is described by its founders as a "planetary knowledge core." Its lead designer is American author and entrepreneur Theodore Beale (also known by his pen name Vox Day). The project started as a fork of the free online encyclopedia Wikipedia, whose full content was transferred onto the wiki. A "forkbot" is used to automatically update articles and article segments that member editors have not yet worked on. The site's membership consists of Galaxians (standard editors), Starlords (administrators), Corelords (corporate professionals who have purchased a license to oversee articles related to their industries), and a Council (top-level supervisors). Corelords do not have censorship abilities, but can control forked articles they may favor. Some articles are also listed as "Verified". All article edits must be truthful and meet other site standards.

InfoGalactic is intended to have less alleged politically progressive, left-wing, or "politically correct" bias than Wikipedia, and to allow articles or statements that would not be allowed on Wikipedia because of problems with Wikipedia's policies on reliable sources, or due to alleged biases held by Wikipedia editors.[1] Standards on notability are more relaxed, within limits. Articles based on original research may also be allowed if all conflicts and controversies are disclosed.

As of mid-2018, creating or editing articles was restricted to editors who first had to request a free account. Later, it is planned to allow anyone to edit almost all articles, similar to Wikipedia. Exceptions would be articles vulnerable to frequent vandalism or "edit wars", but in those cases the articles themselves could be "forked" to allow different viewpoints to express themselves (unlike Wikipedia).

Notable early articles created on Infogalactic focus on alleged cases of left-wing bias or media censorship,[2] which are listed with sources. Many articles about classic authors were expanded, and Wikipedia articles about political controversies were significantly altered.

In its third year, Infogalactic's highest priority was to acquire more contributors. Wikipedia has millions of articles that are regularly updated by tens of thousands of editors from almost all countries. About 100,000 editors contribute at least once a month.[3] Specialist contributors spend several hours a month maintaining articles in their areas of expertise. Meanwhile, Infogalactic was criticized for still having too few editors.[4] However, as Wikipedia becomes more "SJW converged" or imposes more politically correct or other censorship,[5] editors expelled from Wikipedia may choose to work for other online information sources instead.

Lucas Nolan of Breitbart News Network described InfoGalactic as a "replacement for Wikipedia that promises to be free of the problems that have plagued Wikipedia such as the bureaucracy amongst editors, censorship of content, harassment, and vandalism of public figures’ pages." [6] Infogalactic was also featured in articles in Wired[7] and in L'Express[8].

Infogalactic has a wide diversity of contributors representing generally right-wing, alt-right, or progressive libertarian viewpoints. There are few traditional left-wing editors, though they would be allowed. As contributors worked to expand the list of edits and of original articles, it was argued that editors should avoid deleting original contributions, but instead improve them by adding qualifying text; and that Infogalactic should accept shorter or more rudimentary articles and edits than Wikipedia (for now).

The name Infogalactic resembles the fictional Encyclopedia Galactica featured in Isaac Asimov's science fiction stories and novels published between 1942 and 1993 known as the Foundation series, which is meant as a compendium of all human knowledge.