Information and communications technology (ICT) is often used as an extended synonym for information technology (IT), It is a more extensive term (i.e. more broad in scope) that stresses the role of unified communications[1] and the integration of telecommunications (telephone lines and wireless signals), computers as well as necessary enterprise software, middleware, storage, and audio-visual systems, which enable users to access, store, transmit, and manipulate information.[2] 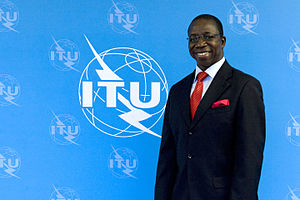 However, ICT has no universal definition, as "the concepts, methods and applications involved in ICT are constantly evolving on an almost daily basis."[3] The broadness of ICT covers any product that will store, retrieve, manipulate, transmit or receive information electronically in a digital form, e.g. personal computers, digital television, email, robots.

The phrase "information and communication technology" has been used by academic researchers since the 1980s,[4] and the abbreviation ICT became popular after it was used in a report to the UK government by Dennis Stevenson in 1997,[5] and in the revised National Curriculum for England, Wales and Northern Ireland in 2000. But in 2012, the Royal Society recommended that ICT should no longer be used in British schools "as it has attracted too many negative connotations",[6] and with this being in effect since 2014 the National Curriculum began to utilize the word computing, which reflects the addition of computer programming into the curriculum.[7] A leading group of universities consider ICT to be a soft subject and thus advise students against studying A-level ICT, preferring A-level Computer Science instead.[8]

The money spent on IT worldwide has been most recently estimated as US $3.5 trillion and is currently growing at 6% per year – doubling every 15 years. The 2014 IT budget of US federal government is nearly $82 billion.[9] IT costs, as a percentage of corporate revenue, have grown 50% since 2002, putting a strain on IT budgets. When looking at current companies’ IT budgets, 75% are recurrent costs, used to “keep the lights on” in the IT department, and 25% are cost of new initiatives for technology development.[10]

The average IT budget has the following breakdown:[10]

ICT sector in the OECD

The following is a list of OECD countries by share of ICT sector in total value added in 2013.[11]

The ICT Development Index ranks and compares the level of ICT use and access across the various countries around the world.[12] In 2014 ITU (International Communications Union) released the latest rankings of the IDI, with Denmark attaining the top spot, followed by South Korea. The top 30 countries in the rankings include most high-income countries where quality of life is higher than average, which includes countries from Europe and other regions such as "Australia, Bahrain, Canada, Japan, Macao (China), New Zealand, Singapore and the United States; almost all countries surveyed improved their IDI ranking this year."[13]

On 21 December 2001, the United Nations General Assembly approved Resolution 56/183, endorsing the holding of the World Summit on the Information Society (WSIS) to discuss the opportunities and challenges facing today's information society.[14] According to this resolution, the General Assembly related the Summit to the United Nations Millennium Declaration's goal of implementing ICT to achieve Millennium Development Goals. It also emphasized a multi-stakeholder approach to achieve these goals, using all stakeholders including civil society and the private sector, in addition to governments.

To help anchor and expand ICT to every habitable part of the world, "2015 is the deadline for achievements of the UN Millennium Development Goals (MDGs), which global leaders agreed upon in the year 2000."[15] 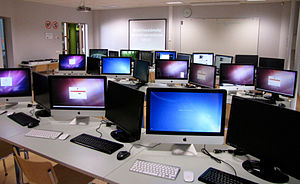 Today's society shows the ever-growing computer-centric lifestyle, which includes the rapid influx of computers in the modern classroom.

Information and Communication Technology can contribute to universal access to education, equity in education, the delivery of quality learning and teaching, teachers’ professional development and more efficient education management, governance and administration. UNESCO takes a holistic and comprehensive approach to promoting ICT in education. Access, inclusion and quality are among the main challenges they can address. The Organization’s Intersectral Platform for ICT in education focuses on these issues through the joint work of three of its sectors: Communication & Information, Education and Science.

In modern society ICT is ever-present, with over three billion people having access to the Internet.[16] With approximately 8 out of 10 Internet users owning a smartphone, information and data are increasing by leaps and bounds.[17] This rapid growth, especially in developing countries, has led ICT to become a keystone of everyday life, in which life without some facet of technology renders most of clerical, work and routine tasks dysfunctional. The most recent authoritative data, released in 2014, shows "that Internet use continues to grow steadily, at 6.6% globally in 2014 (3.3% in developed countries, 8.7% in the developing world); the number of Internet users in developing countries has doubled in five years (2009-2014), with two thirds of all people online now living in the developing world."[13]

However, hurdles are still at large. "Of the 4.3 billion people not yet using the Internet, 90% live in developing countries. In the world’s 42 Least Connected Countries (LCCs), which are home to 2.5 billion people, access to ICTs remains largely out of reach, particularly for these countries’ large rural populations."[18] ICT has yet to penetrate the remote areas of some countries, with many developing countries dearth of any type of Internet. This also includes the availability of telephone lines, particularly the availability of cellular coverage, and other forms of electronic transmission of data. The latest "Measuring the Information Society Report" cautiously stated that the increase in the aforementioned cellular data coverage is ostensible, as "many users have multiple subscriptions, with global growth figures sometimes translating into little real improvement in the level of connectivity of those at the very bottom of the pyramid; an estimated 450 million people worldwide live in places which are still out of reach of mobile cellular service."[16]