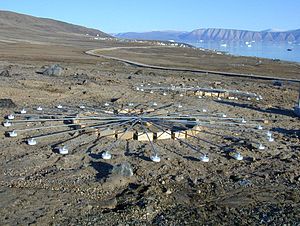 Infrasound, sometimes referred to as low-frequency sound, is sound that is lower in frequency than 20 Hz (hertz) or cycles per second, the "normal" limit of human hearing.[lower-alpha 1] Hearing becomes gradually less sensitive as frequency decreases, so for humans to perceive infrasound, the sound pressure must be sufficiently high. The ear is the primary organ for sensing infrasound, but at higher intensities it is possible to feel infrasound vibrations in various parts of the body.

The study of such sound waves is referred to sometimes as infrasonics, covering sounds beneath 20 Hz down to 0.001 Hz. This frequency range is utilized for monitoring earthquakes, charting rock and petroleum formations below the earth, and also in ballistocardiography and seismocardiography to study the mechanics of the heart.

Infrasound is characterized by an ability to cover long distances and get around obstacles with little dissipation. In music, low frequency sounds, including near infrasound, can be produced using acoustic waveguide methods, such as a large pipe organ or, for reproduction, exotic loudspeaker designs such as transmission line, rotary woofer, or traditional subwoofer designs about 10 times larger in order to octave down below their normal limit.

Infrasound was used by the Allies of World War I to locate artillery.[1] One of the pioneers in infrasonic research was French scientist Vladimir Gavreau.[2] His interest in infrasonic waves first came about in his laboratory during the 1960s, when he and his laboratory assistants experienced pain in the ear drums and shaking laboratory equipment, but no audible sound was picked up on his microphones. He concluded it was infrasound caused by a large fan and duct system and soon got to work preparing tests in the laboratories. One of his experiments was an infrasonic whistle, an oversized organ pipe.[3][4][5]

Infrasound is defined by the American National Standards Institute as "sound at frequencies less than 20 Hz." 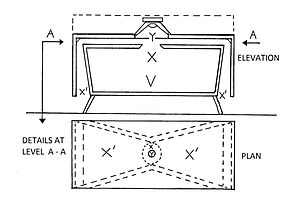 Patent for a double bass reflex loudspeaker enclosure design intended to produce infrasonic frequencies ranging from 5 to 25 hertz, of which traditional subwoofer designs are not readily capable.

Infrasound can result from both natural and human sources:

Animals have been known to perceive the infrasonic waves going through the earth by natural disasters and can use these as an early warning. A recent example of this is the 2004 Indian Ocean earthquake and tsunami. Animals were reported to flee the area hours before the actual tsunami hit the shores of Asia.[28][29] It is not known for sure if this is the exact cause, as some have suggested that it may have been the influence of electromagnetic waves, and not of infrasonic waves, that prompted these animals to flee.[30]

Research in 2013 by Jon Hagstrum of the US Geological Survey suggests that homing pigeons use low frequency infrasound to navigate.[31]

20 Hz is considered the normal low-frequency limit of human hearing. When pure sine waves are reproduced under ideal conditions and at very high volume, a human listener will be able to identify tones as low as 12 Hz.[32] Below 10 Hz it is possible to perceive the single cycles of the sound, along with a sensation of pressure at the eardrums.

The dynamic range of the auditory system decreases with decreasing frequency. This compression can be seen in the equal-loudness-level contours, and it implies that a slight increase in level can change the perceived loudness from barely audible, to loud. Combined with the natural spread in thresholds within a population, it may have the effect that a very low-frequency sound which is inaudible to some people may be loud to others.

One study has suggested that infrasound may cause feelings of awe or fear in humans. It also was suggested that since it is not consciously perceived, it may make people feel vaguely that odd or supernatural events are taking place.[33]

A scientist at the Sydney University Auditory Neuroscience Laboratory stated that there is a growing evidence that infrasound may affect a few people's nervous system by stimulating the vestibular system and this has shown in animal models an effect similar to sea sickness.[34] A study of 45 people Tehran University researchers stated “Despite all the good benefits of wind turbines ... this technology has health risks for all those exposed to its sound.” in particular, sleep disorder. In another study by researchers at Ibaraki University in Japan said the EEG tests showed the brain function showed that the infrasound produced by wind turbine were “considered to be an annoyance to the technicians who work in close to a modern large-scale wind turbine”.[35][36][37]

On 31 May 2003, a group of UK researchers held a mass experiment where they exposed some 700 people to music laced with soft 17 Hz sine waves played at a level described as "near the edge of hearing", produced by an extra-long-stroke subwoofer mounted two-thirds of the way from the end of a seven-meter-long plastic sewer pipe. The experimental concert (entitled Infrasonic) took place in the Purcell Room over the course of two performances, each consisting of four musical pieces. Two of the pieces in each concert had 17 Hz tones played underneath.[38][39]

In the second concert, the pieces that were to carry a 17 Hz undertone were swapped so that test results would not focus on any specific musical piece. The participants were not told which pieces included the low-level 17 Hz near-infrasonic tone. The presence of the tone resulted in a significant number (22%) of respondents reporting anxiety, uneasiness, extreme sorrow, nervous feelings of revulsion or fear, chills down the spine, and feelings of pressure on the chest.[38][39]

In presenting the evidence to the British Association for the Advancement of Science, Professor Richard Wiseman said, "These results suggest that low frequency sound can cause people to have unusual experiences even though they cannot consciously detect infrasound. Some scientists have suggested that this level of sound may be present at some allegedly haunted sites and so cause people to have odd sensations that they attribute to a ghost—our findings support these ideas."[33]

Psychologist Richard Wiseman of the University of Hertfordshire suggests that the odd sensations that people attribute to ghosts may be caused by infrasonic vibrations. In 1998, Vic Tandy, experimental officer and part-time lecturer in the school of international studies and law at Coventry University, and Dr. Tony Lawrence of the psychology department wrote a paper called "Ghosts in the Machine" for the Journal of the Society for Psychical Research. Their research suggested that an infrasonic signal of 19 Hz might be responsible for some ghost sightings. Tandy was working late one night alone in a supposedly haunted laboratory at Warwick, when he felt very anxious and could detect a grey blob out of the corner of his eye. When Tandy turned to face the grey blob, there was nothing.

The following day, Tandy was working on his fencing foil, with the handle held in a vice. Although there was nothing touching it, the blade started to vibrate wildly. Further investigation led Tandy to discover that the extractor fan in the lab was emitting a frequency of 18.98 Hz, very close to the resonant frequency of the eye given as 18 Hz by NASA.[40] This was why Tandy conjectured that he had seen a ghostly figure— he believed that it was an optical illusion caused by his eyeballs resonating. The room was exactly half a wavelength in length, and the desk was in the centre, thus causing a standing wave which caused the vibration of the foil.[41]

Tandy investigated this phenomenon further and wrote a paper entitled The Ghost in the Machine.[42] Tandy carried out a number of investigations at various sites believed to be haunted, including the basement of the Tourist Information Bureau next to Coventry Cathedral[43][44] and Edinburgh Castle.[45][46]

NASA Langley has designed and developed an infrasonic detection system which can be used to make useful infrasound measurements at a location where it was not possible previously. The system comprises an electret condenser microphone PCB Model 377M06, having a 3-inch membrane diameter, and a small, compact windscreen.[47] Electret-based technology offers the lowest possible background noise, because Johnson noise generated in the supporting electronics (preamplifier) is minimized.[47]

The microphone features a high membrane compliance with a large backchamber volume, a prepolarized backplane and a high impedance preamplifier located inside the backchamber. The windscreen, based on the high transmission coefficient of infrasound through matter, is made of a material having a low acoustic impedance and sufficiently thick wall to insure structural stability.[48] Close-cell polyurethane foam has been found to serve the purpose well. In the proposed test, test parameters will be sensitivity, background noise, signal fidelity (harmonic distortion), and temporal stability.

The microphone design differs from that of a conventional audio system in that the peculiar features of infrasound are taken into account. First, infrasound propagates over vast distances through the Earth’s atmosphere as a result of very low atmospheric absorption and refractive ducting that enables propagation by way of multiple bounces between the Earth’s surface and the stratosphere. A second property that has received little attention is the great penetration capability of infrasound through solid matter – a property utilized in the design and fabrication of the system windscreens [48]

Thus the system fulfills several instrumentation requirements advantageous to the application of acoustics: (1) a low frequency microphone with especially low background noise, which enables detection of low-level signals within a low-frequency passband; (2) a small, compact windscreen that permits (3) rapid deployment of a microphone array in the field. The system also features a data acquisition system that permits real time detection, bearing, and signature of a low-frequency source.[48]

The Comprehensive Nuclear-Test-Ban Treaty Organization Preparatory Commission uses infrasound as one of its monitoring technologies, along with seismic, hydroacoustic, and atmospheric radionuclide monitoring. The loudest infrasound recorded to date by the monitoring system was generated by the 2013 Chelyabinsk meteor.[49]